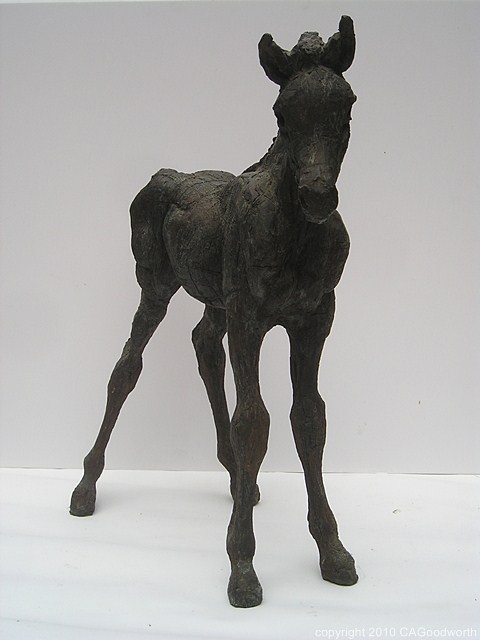 As the new girl, you must
learn the rules of recess
lightning-quick.
The boys are cowboys,
the girls wild horses.
If they catch you,
they get to corral you.
How fast can you flee,
your bare legs lean,
wind in your hair,
jacket wide open?
You reach the creek edge,
breathless, untouched,
watch as boys lead girls
by the wrists
to the school’s cool shadow.
The girls whinny,
paw the ground, nibble
pretend apples from the boys’
chapped hands.
From the periphery
you see you are neither
the tamer nor the tamed.
You toss your mane.
Until now, you never knew
you could outrun everyone.

Strengths and struggles, beauty for the beggars and the rich, deity and degradation for the faithful and the sinners: that she is, with all the possible shades in between and galaxies ever met, with all the indefinability of their endless re-compositions.

To emancipate a woman is to refuse to confine her to the relations she has to men, not to deny them to her. (Simone de Beauvoir, The second sex.) This is the operation that this poem carries out by ad-dressing the new girl and by making sure she won’t fall in the old dichotomies: neither the tamer nor the tamed, this girl has in herself the power to outrun everybody and surpass all expectations as she discovers, with a toss of her mane, that she is more than whatever label players and referee have stuck on her.

Or at least this would be my guess as I approach this poem from the disadvantaged position of being one of the boys.

This poem’s images are so wonderful; I think my favorite is, “jacket wide open,” because it not only indicates the speaker’s running, but also the speaker’s consideration of the world.  And while the considerations of gender relations are made fairly clearly, the poem’s tweak at the end to a realization of the speaker’s own gift and power is what really, for me, makes the poem powerful.

Debra Kaufman’s “Wild Horses” subverts the “new girl” story we gave grown used to.  In her poem, written in the second person to every one of us who has been a new girl in school, the girl already understands the rules of the game, that girls run and boys chase.  But through the course of the poem, brief, taut, and redolent with the anxieties and memories of the schoolyard, she discovers that girls are meant to be caught—that it isn’t even really a game.  We know she is ready to compete, with her “bare legs…wind in [her] hair” and her open jacket, but when she finds herself the lone escaped horse, she tosses her mane and knows, she doesn’t have to play the game.  She is on the periphery, and she has just learned that she is in control.  A very modern take on a feminist poem, “Wild Horses” is a satisfying, refreshing read.

I just read this out loud to myself here in my car and it gave me goose bumps. What a thrill to run like that before there’s anything bouncy or ponderous to weigh her down! What thrill to be awed by dawning awareness of her own swiftness and self sufficiency. In the “cool shadow” of the school, though, is a foreshadowing of what might be to come… when the “pretend apples” become real, even the wildest mare might eventually find that taking a nibble is as appealing as galloping away. For now she stands on the edge, untamed but riveted on what is occurring in the “corral”. Lastly, I can’t end this without mentioning how brilliant I find the detail of “chapped hands”. It added such an  unromantic physical reality to this scene.