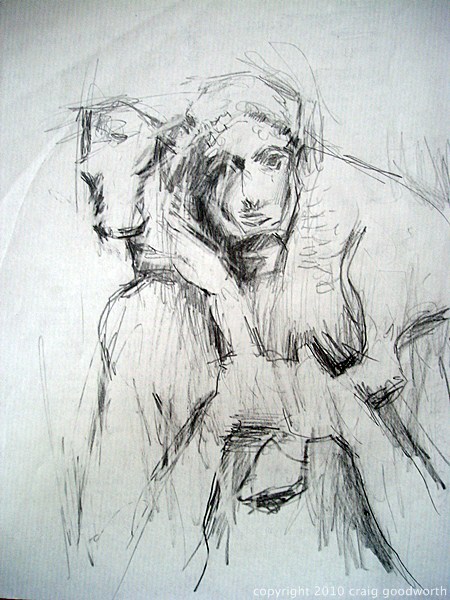 Video voyeurs, we peer into the
saltwater tank.  You
press yourself against
the mirrored wall, asleep,
but restless; your mantle slowly
sways in the pseudo current.
The petite cups along each of your
elegant arms pulse; the tips
of your tentacles twine
gently among themselves,
in and out, sentient fiddleheads.

You cycle through your repertoire:
First you are brindle, then
all color evaporates and you are chalk.
Seconds later your funnel flutters, and you
erupt into ink. One tentacle unfurls, tenses,
and you blanche camouflage—just
another rock waiting in the reef.

The narrator proposes a script for your dreams:
you see a crab, he says, and leave the bottom,
you subdue your prey in your sleep and
now impersonate rock,
but I perceive only the impervious
plane of glass.

You cleave to your
replica in the mirror,
auditioning masks,
as if to ask,
is it this? Is it this?

But it’s the salty water stinging and reviving all our cuts and grazes that shakes us, reminding us that this is not our tank/turf, nor our place to play. We stay, spectators of a true master shapeshifter; mesmerized by its evolutions and dances we stay, somewhat reassured: we are not the only con artists in the neighbourhood.

I will leave it to others to verify the description of the octopus at the center of the poem.  Nevertheless, the consideration of the anxiety we all feel working to be something for someone else—that description—as we turn into the octopus by the poem’s conclusion, is nicely turned.  What do we dream of ourselves, and can we make ourselves that thing, the poem asks.

Beneath its sensual imagery and mellifluous phraseology, a dour take on modern life:  we are voyeurs who peer through glass – or at screens, presumably – trying for the vicarious thrill which might accompany the observation of engagement with life, but finding only isolated fellow creatures restless in their sleep; we are confined in meaningless illusion that is the artifice of unseen powers; those tentacles of our imaginations which could be probing, exploring, reaching, and grasping, merely twine about one another in languid self-pleasure; we go through our routines of camouflage and display to no apparent end; we find our dreams narrated dubiously by voices of authority; we ‘cleave’ to the mirror of self-regard but keep trying on masks, failing to realize we will never be satisfied until we face the world as our authentic selves.

Speaking to ‘video voyeurs’ as much or more than to the poem itself, I wanted to set up some background for this poem whose subject revolves around these fascinating animals (that Jared, above, felt he lacked), and that Melody probably has (but might possibly not have come across herself specifically yet?). I wanted to point to a recent Netflix documentary by filmmaker Craig Foster that is poetic in its concept and terse narration, is beautiful to watch and awe-inspiring in its account of the curiosity and intelligence of these short-lived (4 years on average, usually less) creatures: My Octopus Teacher: https://www.youtube.com/watch?v=3s0LTDhqe5A. I was so bowled over by it that I moved Sy Montgomery’s book up my reading queue. Hers is an account and memoir of a naturalist who takes it into her head to start years’ long visits to befriend and interact with a series of octopuses at her nearby New England Aquarium in order to research and write her book, The Soul of an Octopus. White is what color octopuses turn when relaxed or asleep, but I wanted to quote from Montgomery’s book this section about their ability to transform and camouflage: “Most animals gifted with the ability to camouflage can assume only a tiny handful of fixed patterns. The cephalopods have a command of thirty to fifty different patterns per individual animal. They can change color, pattern, and texture in seven tenths of a second. On a Pacific coral reef, a researcher once counted an octopus changing 177 times in a single hour. At Woods Hole Oceanographic Institution, cephalopods put on laboratory checkerboards virtually disappear…they can create a pattern of light and dark that makes them invisible on virtually any background, to virtually any eye…To blend with its surroundings, or to confuse predators or prey, an octopus can produce spots, stripes, and blotches of color anywhere on its body except its suckers and the lining of its funnel and mantle openings. It can create a light show on its skin. One of several moving patterns the animal can create is called ‘Passing Cloud’ because it’s like a dark cloud passing over the landscape–making the octopus look like it’s moving when it’s not. And of course the octopus can also voluntarily control its skin texture–raising and lowering fleshy projections called papillae–as well as change its overall shape and posture. The sand-dwelling mimic octopus, an Indonesian species, is particularly adept at this. One online video shows the animal altering its body position, color, and skin texture to morph into a flatfish, then several sea snakes, and finally a poisonous lionfish–all in a matter of seconds,” from The Soul of an Octopus, Sy Montgomery, pages 45-46. I realize, noting the other three responders above that Melody Wilson is doing more than ‘octopus porn’ with her poem, and sincerely I hope this biological/naturalist backdrop comment doesn’t intrude or distract unduly from her piece but helps to accentuate what she’s addressing in her poem.

The octopus has been a center of scientific attention of late, as a candidate for a high level of consciousness. Along with its central brain, it has eight more. A ganglion cluster for each leg, a kind of distributed network of sentience. The poet goes right to that point, transcending descriptions of what the octopus is doing to imagine what it’s thinking–and ascribing to it the same level of self-awareness humans have when we pose in front of a mirror, rifling through personas. And so this close observation of a fellow creature becomes a meditation on a fellow soul.