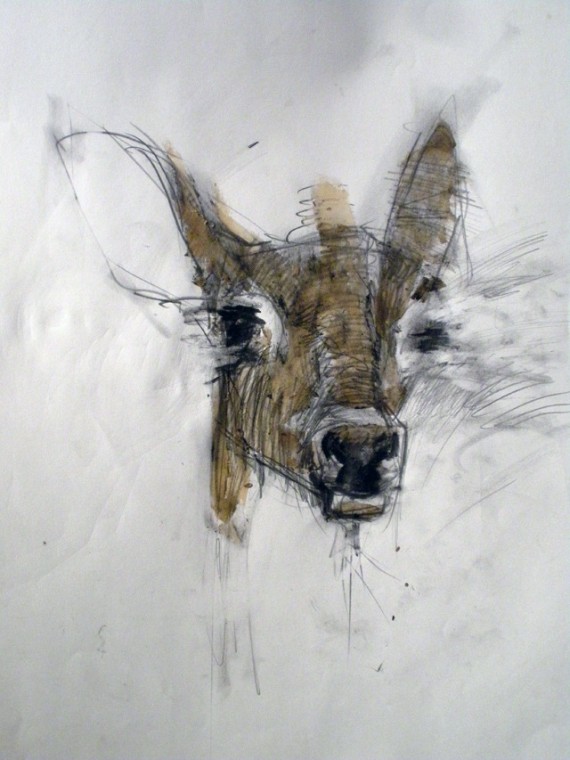 Among my students–among even the brightest of them–many start out by supposing that poetry is a species of denotative art, a laboriously embroidered species of that genus perhaps, but a primarily expressive, referential undertaking. Most imagine that the role of the poet is to express her unique feelings, or to share his comprehensive and world-correcting understandings. Some few still imagine that their job is to seek out vivid experiences they can then document.

My sense of actual poetry writing is that, before it can so much as begin, it must be recognized as a way by which we concurrently construct and discern experience; it is not a means by which we transmit ideas or narrative events we think we already understand, but a way we might discover more sustaining versions of them.

Like most endeavors of the spirit, poetry itself is a pilgrim’s journey. We gather our gear, and we start out–alert to where the path will lead.

–Scott Cairns, from A Short Trip to the Edge: A Pilgrimage to Prayer

On the central spandrel, at
Christ’s right shoulder, hovers
a shy, winged calf, holding
a Bible like an autograph-
seeker approaching an author.
Likewise we tourists go in,
as if history were a celebrity.
And how oddly modern and severe
it looks, all stone and stone-colors,
all space and light, as if light
were modern and the dark ages dark.
So it surprises us to learn
from our brochures all this was painted
when built. Maybe garish, even.

–William Matthews, from The Basilica at Vézelay

The girl in a house dress, pushing open the window,
Is also the fat king sitting under the oak tree,
And the garbage men, thumping their cans, are
Crows still cawing,
And the nobles are offering the sheet to the king.
One thing is also another thing, and the doomed galleons,

–Robert Bly, from Remembering in Oslo the Old Picture of the Magna Carta

I was a virgin when I heard Ammons read. A virgin of poetry readings, I mean, though the experience was probably more memorable and momentous than the other one. It occurred to me that Ammons might have been equally innocent, and equally confused, as ten minutes into his reading he suddenly stopped and said, ‘You can’t possibly be enjoying this,’ then left the podium and sat back down in the front row. No one knew what to do. Some people protested from the pews–we were in a place that had pews–that they were in fact enjoying it, though the voices lacked conviction and he didn’t budge.

The tractor runs over dirt and shapes it, turning
stubble and moving the hill
furrow by furrow to the terraces,
slicing clods, wearing
them away and chopping roots
to rot in sweet beds of decay.

The owl: eyes like arenas
gathering
the weeds and hungry ditches.
She guards the air like a monument
shedding a field of energy downwind.

Old hubcaps burning all night in the creek.

Many home aquarists report that their octopuses appear to enjoy watching television with them. They particularly like sports and cartoons, with lots of movement and color. In their authoritative Cephalopods: Octopuses and Cuttlefishes for the Home Aquarium, King and her coauthor, Colin Dunlop, even suggest placing the tank in the same room as the TV, so owner and octopus can enjoy programs together.

But my husband was not enthused at the thought of an octopus in our house.

–Sy Montgomery, from The Soul of an Octopus, pg. 65

Two rhythmic systems, then, by which to “control the intonations and pauses of the reader’s voice,” as Frost would have it. In one hand: the power of artifice, the management of the line, and the poet’s handy opportunity to tap the reader’s hunger for pattern (we are, after all, patternmongering animals) and thereby song. In the other hand: rhythms of syntax, which are embedded in the language itself and used unself-consciously as we translate the world before us: the rhythms of thought, familiar signals to the reader’s brain not only for making “meaning” but also for imparting tone. Only in poetry, to its great glory, can we find both systems working at fullest capacity.

–Ellen Bryant Voigt, from The Art of Syntax: Rhythm of Thought, Rhythm of Song, pg. 77

I started out as a poet believing that greatness will out, as it were, that fate will find and save the masterpieces from oblivion no matter what. A decade of standing in that aforementioned storm, as well as making my way through the collected works of just about every American poet of note for the annual Ruth Lilly Prize for lifetime achievement, has convinced me otherwise. Chance and power play a large part, and I feel sure that some genuinely great things fall through the cracks–forever. But even aside from that, there are many, many poems that, though the future will likely find them cold and curiously dark, can nevertheless light the time we’re in. This is a sadness, yes, but also a freedom. Take your eyes off eternity’s horizon and you might miss the meteor that flashes by every century or so (though I doubt it), but the immediate landscape is suddenly much more interesting. There is a spiritual lesson here.

Many poets are not poets for the same reason that many religious men are not saints: they never succeed in being themselves. They never get around to being the particular poet or particular monk they are intended to be by God. They never become the man or the artist who is called for by all the circumstances of their individual lives.

They waste their years in vain efforts to be some other poet, some other saint. For many absurd reasons, they are convinced that they are obliged to become somebody else who died two hundred years ago and who lived in circumstances utterly alien to their own.

There can be an intense egoism in following everybody else. People are in a hurry to magnify themselves by imitating what is popular–and too lazy to think of anything better…

…One of the first signs of a saint may well be the fact that other people do not know what to make of him. In fact, they are not sure whether he is crazy or only proud; but it must at least be pride to be haunted by some individual ideal which nobody but God really comprehends. And he has inescapable difficulties in applying all the abstract norms of ‘perfection’ to his own life. He cannot seem to make his life fit in with the books.

Sometimes his case is so bad that no monastery will keep him. He has to be dismissed, sent back to the world like Benedict Joseph Labre, who wanted to be a Trappist and a Carthusian and succeeded in neither. He finally ended up as a tramp. He died in some street in Rome.

And yet the only canonized saint, venerated by the whole Church, who has lived either as a Cistercian or a Carthusian since the Middle Ages is St. Benedict Joseph Labre.

–Thomas Merton, from New Seeds of Contemplation, the chapter on Integrity, pg. 98 and 103

There are poets who take you to the edge of language, either with words that begin to ease out of their referents (Mallarmé, Mandelstam, Hopkins, Eliot, Crane, Stevens) or with abstractions handled so concretely that you are jolted into an uncanny receptiveness anterior to ‘belief’ or ‘disbelief’ (Dickinson, Wilbur, Eliot again, Stevens again, Anne Carson). This is not a kind of zombie mellifluousness in the first instance, and it’s not a baffling complexity in the second. It is a capacity within language to match–or, really, to be–the unity that is at the heart of the matter. Unity and clarity are not necessarily coextensive. There can be a kind of clarity that is bewilderment, and there can be a kind of bewilderment that reorients one’s spirit.

And you understand: destiny is a jigsaw puzzle;
no matter how many times you have tried to piece it together,
the final picture is always the same.
You hoped so eagerly to make a Gothic cathedral,
but pieced together a grocery store.
You worked up the courage to destroy everything
and tried to build a cathedral again,
but again ended up with a store.