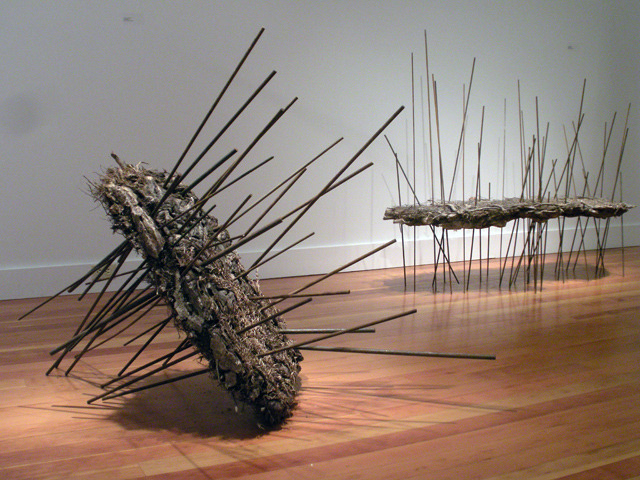 When I Hitchhiked to Big Sur

Ginger and Janet stopped
in their cluttered Oldsmobile
as evening came on.

Twenty miles down the coast
under spring rainclouds
we laid our sleeping bags
on a deserted beach
and told each other stories.

A wild-haired stranger
stumbled into our circle
clutching an army bayonet
in a shaky hand and shouting
about the flashback he was in.

Even as I told myself
to hunker down too,
something inside
sat up my most sociable self
and asked if he’d seen the sunset.

As I chatted cheerily, the weird light
drained from his eyes and he left.

I bathed in the women’s admiration.

Later in the quiet drizzle
Janet told me she couldn’t—
that her boyfriend would kill her—
but she wished she could.

We lay against each other’s backs
in our separate sleeping bags
and the dark cliffs rose above us.

Who is this frantic figure that – having seemingly escaped his Circle – jumps out to scare us during the carefree and unencumbered road trip of our forever-young lives?

The few and precise indications we are given are enough to picture a tormented character coming at us stabbing the air with an army bayonet – residue of which battle? Sadly, too many to choose from.

From which flashback, from which nightmarish wake this lost man is seeking relief? Imploring our attention in the only way he has been taught, what has this poor unabsolved soul been through? What is he asking of us? What abyss his madness had to cover in order for him to materialize here in our circle of living beings? What have we summoned with our light-heartedness and campfire tales?

We all are people who met a violent death,
And were all sinners up to the last hour:
But then the light of heaven made us wary,
So that, repenting and forgiving, we
Came out of life having made our peace with God,
Who stabs us with desire of seeing him. (Dante, Purgatorio, V, 52-57.)

Compassionately, the narrator feels that not all hope is lost for this uninvited ghost. As a fellow human being, his duty towards his guest is as clear as unavoidable and inexplicable. He will win his fears and then, with kindness and camaraderie, he will try to focus the visitor’s attention to the immediate sunset covering all things with its all-forgiving, all-loving light. Peace is restored. A sense of justice, liberation and closure is reinstated as our eyes witness once more a greater power displaying its healing and mysterious influence.

Finally, just as in Dante’s universe, the teller is left in awe and contemplation of a shy and pure Beatrice (Californian born this one) who, however impressed by his vehemence, seem already taken and, quite literally, untouchable.

The idealized adventure out along California’s coast is set nicely here: amiable companions, a keen, if drizzly, setting, and the human truth of finally feeling so comforted by being wanted.  We don’t know why the speaker’s hitchhiking, but being on the road to find connection doesn’t seem far from the poem’s center.  The rambling drifter, the setting sun, the rain, and Janet’s refusal that parallels the dark cliffs all spark the shimmering hope the speaker and all of us want at the end of the journey: someone loves us.

This poem had me at “Ginger and Janet”. I love this story. In the course of one evening and very few lines Earle packs in a rich and funny drama: the kind of heroism (facing a strange stranger with courage) and romantic intrigue (can’t but wish we could) that show up more often in everyday life than in art. I’m thankful to poets who not only notice the poignant stories that happen to regular folk but also have the talent to write it down for us with such spare, perfect details.