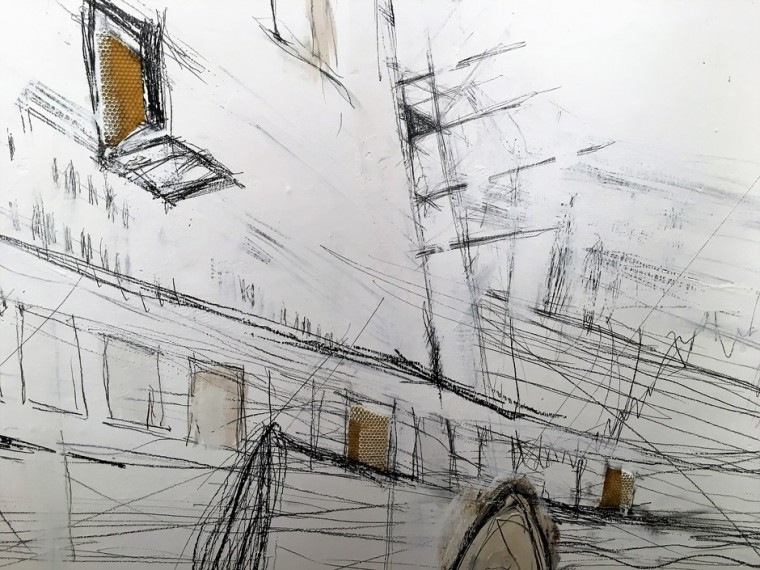 Some see shapes in clouds.
Some see nebulous borders.
The glass is half spilled.

His friend wrote to him of distant places overflowing with details: smells, colors, voices and light swirled in an intoxication of imaginary, but very real elsewhere, delights. He could only respond with the humdrum details of a life at home, of common acquaintances sailing in slow tides of good fortune or bad, overwhelmed sometimes by waves of joy or terror, of children growing into strangers, of the house on the corner being torn down, but the girl they had both loved long ago, who lived there, had married and moved away, so the house had long ago been empty for them, whoever else lived there. Yet his friend, famous in their town as a person who had scaled the heights of fame far away, hung on these details, and pressed him for more. How a traveler through such peacock landscapes spread gaudily all around, could bother with the drabness of here, startled him. His friend might miss the place, but he certainly would relish the opportunity to miss this town for awhile.

The haibun form attracted me to this poem. The subject matter and the speaker’s quiet wonder kept me there. Not many friendships last long enough to get to this place where two people can talk about loves and landscapes that are gone in the real world but still exist in their shared memories. Now one is away and hungry for details of home while one is stuck “home” and dreams of leaving.  A fragile thread of written correspondence connects these two men who seem to combine to be the two halves of a full glass.  I just plain liked it.

I think Mary concisely captures it, pulling out the two halves of the glass, half-full or half-empty, while the poem is told from the half empty point of view, in my read. Or is it? I imagine the one who made it and got away, who only fancies he misses the place is half-full? But then I think of a movie scenario in which this very scene is played out: It’s a Wonderful Life, with George Bailey and Sam ‘hee-haw’ Wainwright. They both sort of loved and sort of didn’t love the Donna Reed character (turns out only George really did, and got the girl)– George appears to be the half-empty even though the premise of the movie is that he’s actually full. And Sam, while he left Bedford Falls and made a fortune in plastics during WWII, doesn’t appear to have secured any deeper meaning or true love in his life? Think of the scene where Sam shows up in his fancy car with his bimbo on their way to Florida and invites George and Mary to come along, then after declining George walks back to his old jalopy and kicks the door closed because it won’t shut–not realizing he’s the one who truly got the gold. Sorry if you don’t know and therefore can’t follow the movie reference–maybe there is someone out there who hasn’t seen it?

I think the point that I wanted to underscore that perhaps Mary skims over is that the thread that joins these two isn’t the more literal ‘correspondence’ between them, but the longing–the incredibly deep longing! Both of them long for the girl that got away such that the ‘house had long ago been empty for them, whoever else lived there.’ And then there is the ‘longing’ both seem to have, where the one who is successful still wants to hear all about the old drab place (which still appears to hold magic for him perhaps only because of that lost love?). This should be a wake up call to the narrator, and while he’s startled, he just can’t see it. Then there’s the longing from the narrator who wishes he’d escaped from his hometown, who is incapable of conceiving that the worldly and superficial success or fame of his friend might actually be only shallow, empty and illusory, so he is bitterly ironic when he says to himself, ‘[I] certainly [italics mine] would relish the opportunity to miss this town for awhile.’ Kind of like the George Bailey before his heraldically delivered epiphany. And of course, the George in this poem never even got the girl. I think what we get isn’t a glass half-empty united with a glass half-full to become one glass of water, but only two examples of one side of a two-sided coin–both strike me as half-empty, it’s just that the narrator fails to realize how he and his friend are the same. To me the central character is their longing and nostalgia, either for what was or what might have been and how diminished and unrealized their ‘half’ lives are as a result. Rather than inhabiting reality where they actually live, they both seem to exist in a dream. Maybe even in some film reel rolling in their minds.