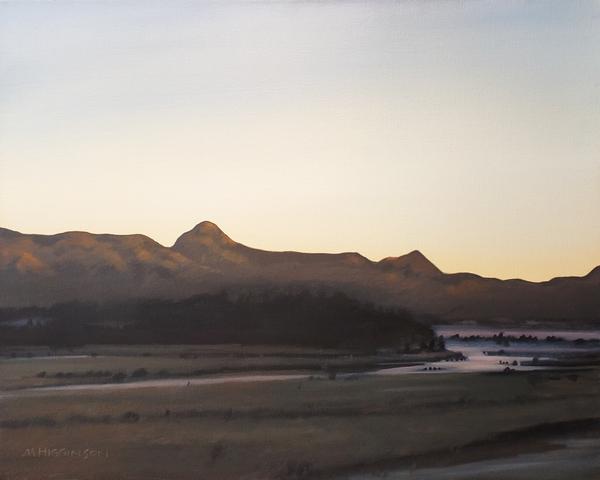 Toward a Sustainable Peace

Several years ago in San Francisco
while I was interviewing Galway Kinnell I asked
how when writing The Book Of Nightmares
the line “Lieutenant that corpse will not stop burning!”

occurred to him. He said he was able to maintain
a mind at ease while relaxing in Majorca, expenses
no consideration since he was there thanks to
a most generous Guggenheim…Well, it’s a hazy summer day,

and this isn’t Majorca, but I’m perfectly at ease.
On a short stroll down a waterfront footpath at Santa Cruz
I pass Steamer Lane where at least fifty
hearty surfers who don’t fear sharks brave the cold Pacific.

Then moving along, a mile up the coast from the wharf,
eucalyptus in the Monarch butterfly preserve have too long
been thirsty as buried buffalo bones. And so
those of us who pray will do so for sustained, everlasting rain.

Santa Cruz is one of several locations within the greater
Monterey Bay sanctuary where it’s often too windy
to light a match. I watch boats lolling, flowing
in and out of coves from here south down to Moss Landing.

I‘m contemplating a sustainable peace. Meanwhile I hear
chatter of kids on the beach and along the swamped Boardwalk.
Salt water laps the pier’s oiled posts as
aspiration and compassion constitute a cozy cornucopia.

It’s a welcome respite, the mind relaxed, couldn’t care
less whether unseen planets collide or not. I’m immune to
the whine and crack of misfiring spark plugs
as motorcycles split eardrums racing along the winding shoreline.

The fit youth who paddles his bright yellow kayak across
a kelp polyp field that bobs atop the ocean doesn’t begrudge
the rogue wave because he knows it will come
eventually, and worrying won’t lessen the risk.

The Boardwalk is packed. Children chortle on the sky
glider, looking down at ocean swells. America watches
as a little brother and sister are having
a hot battle, bop one another with inflated plastic hammers,

vigilant as was Davy Crockett who left home
as a boy, having already honed his skills as a frontier marksman.
The young Crockett was promoted after he fought
valiantly against the Creek Indians under Andrew Jackson.

His legend advanced once his very entertaining almanac
and stage reconstructions of his exploits became popular.
Never blemished by hatred or lust of glory, Crockett
defied then president Old Hickory while serving in congress

inasmuch as he was vehement against confiscation of lands
given the various tribes after they suffered humiliating defeats.
But Jackson as with Grant after him insisted
they strip the Indians to preserve so-called sustainable peace.

The redskin chiefs vowed their gods would avenge
the white man’s sacrilege, but they never did. In any event
I think it’s high time I take a big bite
out of a smoked turkey leg or footlong cob of corn, lick

a chocolate frosty and maybe take a precipitous plunge
on the Double Dip, or get soaked on the Logger’s Revenge ride
as the Chardonnay schooner glides across opaque
waves, within view of the yacht harbor and old brick lighthouse.

I notice quite a long line to enter the Haunted Castle
where the entrance is guarded by gargoyles spraying the crowd
with mist from their ghastly mouths. Relax, I tell
myself, be at peace with the world if only at least for this one day.