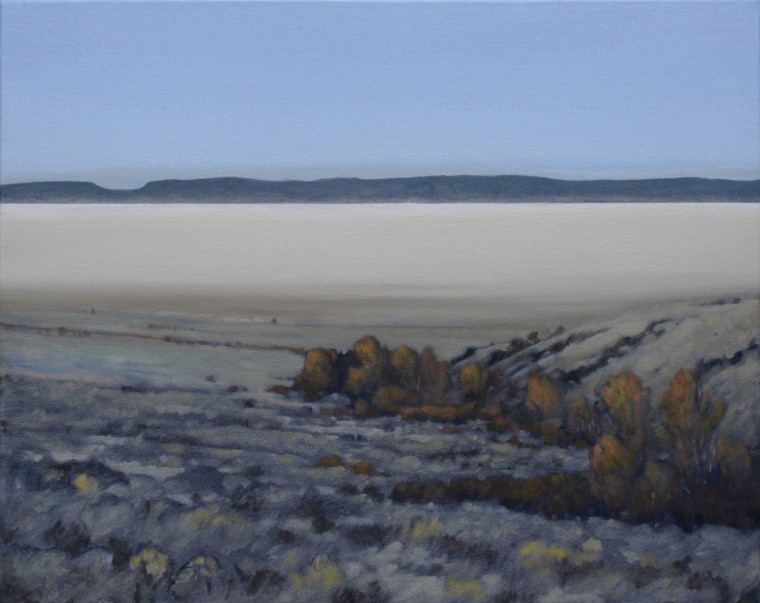 The Wall, the Drunks and the Night

Walk left on Dakota down Main,
check out the firehouse three blocks
ahead, home of Engine 100, the only

engine in town. On the east
side of the brown brick building,

there is a mosaic of French flags.
No one knows why. It has been there
for sixty years and the colors

never fade. Every structure in the town
is flat-roofed, except the water tower

where the town’s name peels
in ragged strips. Inside the station,
a tiny American flag

sits on a card table beside
an overflowing ashtray.

A collection box for the recent
dead, empty of coin, empty of bills.
The heart of the town gone

callous with so much wanting. Two
locals, on most nights, pass out

against the flag wall. One clutches
a digital print of electric-robed Jesus—

the short, squirrelly minister at the Bible
Baptist church hands them out
in the bars, thirty or more,

on Friday nights. He sweats
all the time, wanting just a nip,

a little numb time from the Lord.
If you stand there long enough,
the air thickens with night.

Above, star sweep. If you look
closely, the ghosts of French trappers

pause before the wall. The night
settles into cold and the drunks
stir and moan. They sleep

through a wicked prairie wind, sleep
like tightly curled children.

This is a wonderfully understated rendering of memory and history, the failures of the former and the persistence of the latter, specifically the underlying and persistent reality of French history within the American landscape and the ignorance of Americans of that history. Starting with a description of a small town we’re given, within that town, a detail of a mosaic of French flags whose “colors//never fade.” In contrast, the town’s name “peels/in ragged strips” from the water tower, and a “tiny American flag” is on a card table beside/an overflowing ashtray.” This town that has “gone//callous with so much wanting,” depicts the same greed that eats at the heart of the entire country. It is an image of American society writ in miniature, a haunted culture, and a culture that avoids its own past, a culture that “sleep[s]//through a wicked prairie wind, sleep[s]/like tightly curled children.” Of course, there is an irony in “the ghosts of French trappers.” The greed and consumerism is rooted there in a history that we grew out of. So, it is not so much that there is something superior in that underlying history but that we are denying a piece of a past that is very much us, that is, in fact, who we are. The drunkenness is part of what is typically an escape, children wrapping themselves in blankets to shield themselves against the monsters they imagine in the dark, the return of the repressed or ignored memories. The imagery is crafted with the right balance, serving simultaneously as symbols and as descriptive elements portraying a small American town. It is quite a good poem.

A lovely sad poem of loss and decay. I really like how you pull us into the poem in the first line. I felt I was walking with you as you described this has-been town. I also like the French flags who are there “no one knows why.” The colors of the flag are the only thing that doesn’t fade. Purely random. I really like “ragged strips” and the image of the “tiny American flag.” A good contrast to the French flags. I like “callous with so much wanting.” A great line to describe the town and the people in it. And I love the minister “wanting just a nip/a little numb time for the Lord.” The entire town seems to need “a little numb time.” I am not sure about the French trappers, since they seem to explain the mosaic and I like it being there for no apparent reason, like fate. I also think you could end the poem with “The night/settles into cold.” A really good poem!

A deft description of a dying prairie town—easy to spot all along the county roads in the Midwest. Beyond the description, though, is the connection between all men: the drunks, the priest, the trappers all have their needs, their trials, their desire. Men like these will survive a long death, just like the towns that house them.