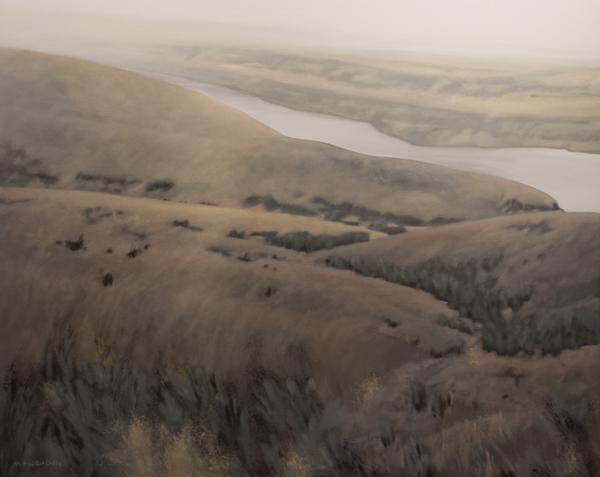 Marilyn Higginson, Above and Beyond, Oil on Wrapped Canvas, 48″ X 60″

Elegy for the Kepler Space Telescope

Not long ago we had yet to invent the universe,
our young clamoring species
still bound to this pale
planet, fixed and geocentric,
ruled by five wanderers:

the messenger,
the farmer,
the beauty,
the red warlord,
the king of the gods who transformed himself
into a swan to seduce Leda.

King Jupiter named his gift of gratitude
to the swan, Cygnus—
or was it a gift of immortality
in another myth,

Cygnus, the celestial vulture,
the soul-carrier,

the soul of Orpheus,
body torn apart
and thrown into the river
by the Thracian women,
placed in the Heavens by the Muses
beside his lyre.

Cygnus, nine stars
far beyond what the Ionians named
the fiery rim,

Cygnus, one cogwheel
revolving within the cosmic engine,
matter, time, human thought
working in precision,
our neoteric model of the universe,

the stellar gods replaced
with coordinates, the compass,
with the mirrored lense—

Cygnus, 804 square degrees
visible at latitudes
between +90° and -40,°
including 2,600 exoplanets
detected during the Kepler mission.

The overall movement here is quite striking and really pulls our contemporary rage for data into perspective. As the poems moves from mythic descriptions to the final stanza’s much more scientifically accurate description, it becomes clear to the reader that while we may have gained that sense of order, we might be able to use and contemplate those physical laws of the universe, it also seems that we’ve only just recreated the universe for our own—and our current—means of explanation. And, further, by doing so, we have gained some power and control, sure (we can define where objects are in space), but we might have also lost a more narrative or even human law about behavior and about how to live on the planet that came from a more mythic way of looking at the stars. Today it seems that the drive for explanations to what is collected via big data mirrors this kind of thinking: that is, while we make some good (perhaps some less good) decisions, we might have also lost something. We might be more than our demographics, and, so the elegy points out, might the universe.