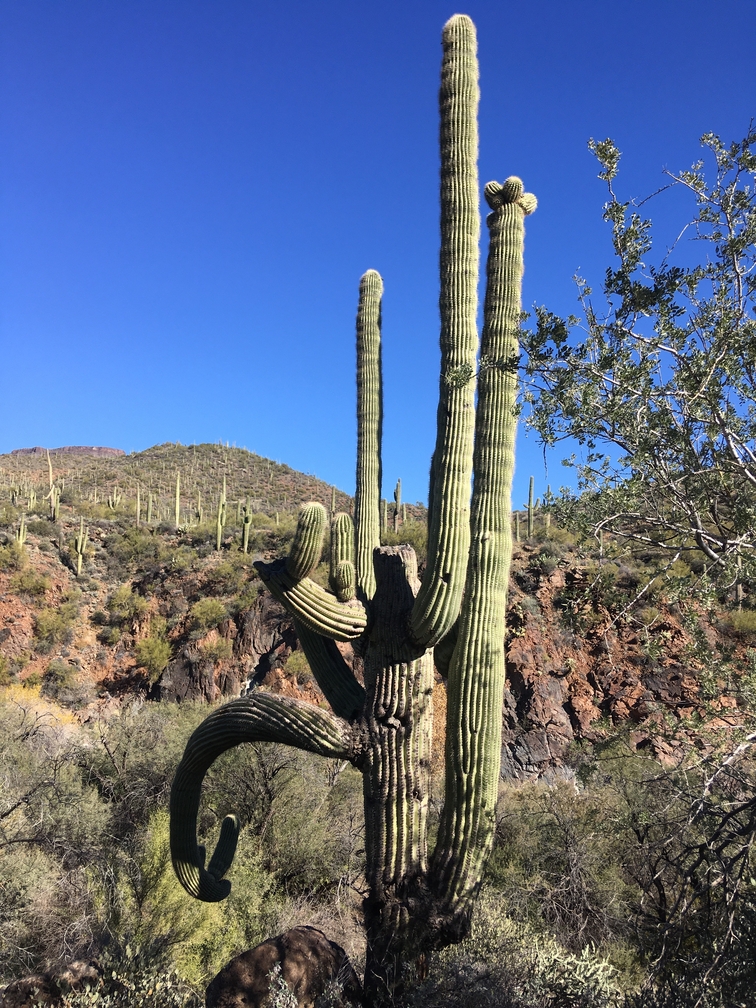 “Phoenix, Arizona: an oasis of ugliness in the midst of a beautiful wasteland.”

Of all the places on this green earth, why go somewhere barren burnt brown where the most lively extension of humanity is an arterial highway that goes from nowhere to nowhere with exits to Los Angeles, Vegas, or Mexico? Where the air smells of dirt, of the ground earth that colors sunsets pastel and there isn’t a soul you know who has seen such skies. Where a city is concealed within rows and miles of single level houses made of concrete that is supposed to resemble adobe but looks more bunker than anything, surrounded by same such walls, aisles of fortresses that no invader would ever even care to conquer. Where Mexican restaurants outnumber all others yet to find one or two that don’t cater to insipid American tastes is always a challenge, piñatas decorating the grocery stores and Mexican women who rarely look a gringo in the eye because if they did they both might fall in love.

Where the south side of town is run down like anywhere else, mean streets whose plywood and sheetrock houses sprawl into a barely habitable accumulation of governed junkyard protected only by rows of cars parked out front. Where strip malls conglomerate every other mile or so on corners that promise false hope of storefronts selling nothing of worth but pre-packaged dreams as their invitation admits many into an oasis of asphalt and palm trees with piped in pop music. Almost anywhere there’s a Hawaiian shirt for sale.

Where pigeons flock to due to the gorgeous weather which in turn is attested to by ladies who wear the bare minimum of clothes on languid one hundred and ten degree summer days. Ladies whose skin is so tan that they resemble a coat of metal perspiring and promise cake white expanses of ass meat and breast pillow while the men mostly look like television anchormen with slicked-back hair and fifty dollar pedicures, plans for retirement in golfing communities filtering through their lizard brains like snippets of pornography for some reason remembered.

Where the White Tank mountains dead end the westward expansion of western suburbs in jagged rows of deadly Zen garden that look as if they can kill all life, all greenery, all aspirations, with their brownstone heat and forms of crumbling high walls that no one ever realizes keeps them there while in adobe stretches people are hummed to by the mechanical throats of their beloved air conditioners. Where people live in pink and green painted shoe closets they call home, where the next apartment complex ends in bushes and a line of dumpsters that transients regularly shop for fashion or sustenance then go and bathe in the many fountains of bleached water that bubble enticingly, tempting one’s sensibilities towards a journey to Mexico and the sea or towards the chocolate mountains of California where there will be the one and only promise that that state keeps: the drama of a pacific.

But it’ll be way too cold to swim in. Where the great desert that never turns off but disguises itself in the rain of monsoon season yet nearly every day wakes with the cheerful sincerity of sunny, sunny skies, lizards tanning themselves on sidewalks and patios, hundreds of MSG factories of Chinese restaurants serving humans and a host of vermin and General Tsao’s Chicken all coagulated like bloody brain matter, mmmm, just imagine the crunchy roaches cooked into the crispy eggrolls.

Where trains in the dead of night speed through placid neighborhoods, some houses have green-painted rock gardens front yard lawns, speeding past horse farms in the middle of the city that is dissected into parts by long canals of the type Mars once had, edged by walkways of palm trees and dust, just perfect to stroll down especially if you’ve an apple you’d like to share, maybe even a lump of sugar, huh? Horse heads waiting to be stroked or fed their tiny increment of bliss as they gaze grassward just behind their unfair fences as the sky is reproduced especially for them upside down on the ground of barely flowing green/black canal water that is if not deeper then scarier than the deepness that floats on by us above.

Where radiant silhouettes of buttes backlit by a Vegas of raw electrical power towers aimlessly over water storage tanks, up brush and cactus covered carapaces of hill flattening off into dangerous calderas a million years old you can climb into at night to get a view of the vast expanse of the computer chip city that you are for some reason living in and are attracted to because it is in a way a sensual moonbase without the need of imported gravity.

Where parking lots of streamliners glisten like oxygen tanks left on an Everest nobody cares about, stacked at the base of decaying organ pipes of the Superstition mountains like litter organized into a bad attempt at cleanliness or art. From one broken stone column peak, it seems saguaro are assembling into groups of fattened Q-tips that have just cleaned the ears of the sun. Where there are more alleys filled with defunct parts of air conditioning units that lead down graffiti-sprayed adobe-lined dead ends that are further made trap-like by low electric lines hanging like vines of tar from weathered wood poles.

And what if it is the first experience of an owl on a train bridge spanning a dry wash whose sand feels like silk to the naked feet at night. If it’s the point of departure for climbing buttes or even half-abandoned skyscrapers of college building summer empty dorms to watch incoming airplanes change from UFO to missile to pretty amazing in itself aircraft bedecked with bright painting floating in from who knows where to stop for a drink of fuel in the harsh mean desert.

So what if it’s where a road map was driven all day and into the evening the stars appear as if they are an infinity of Lightbright: the truth revealing itself over the Mogollon rim as if a set of crystal had shattered and hadn’t been swept up. Where a night with crickets and slow moving free ranging cattle looked into your greasy morning, while you slept in a car, windows cracked open near the vast pink heaven blue haze that hovers over Canyon de Chelley, a flat-topped petrified prairie that breaks open and cracks down into a red rock Coney Island of caves, Indian dwellings, monuments of rock planted and ungrowing where wild dogs will accept an invitation to eat pretzel rods but will demur from being petted and will thank you by barking their goodbyes.

This is where you spend the night under branches of oak and aspen where everything is or at one was or will be the color red and will smell of rain’s promise. Where sand dunes that race along roads towards grocery stores whose parking lots are occupied by tumbleweed and silence and whose only song is Navajo radio piped in over unseen loud speakers. Brown-eyed faces who’ve seen it all before and regard you as a stranger in their strange land that your presence has forced them to live in.

A place where mountains persist as nightmares do, larger than life but as tactile as the paper this is printed on so they must be driven to and hiked and touched even if it means driving dirt roads that lead only to potential helicopter rescues and four minutes of fame on local television. Sandy paths and hidden boulders arrayed until where it is you hiked to, but you don’t think you’ll ever find the way back and it’s o.k. because you brought candy bars and African music on a walkman and there’s snow and the callusy tongue of a road that has led you here, unwinding into unknown red rock country of little vegetation except rabbit grass and scrub brush and the only living inhabitants are Native Americans who live like the aborigines we dream them to be, who don’t want their picture taken so all there’s to be done is to wash your hair in a box canyon eroding into cave and hope the Hopi never find out.

Where the world as we know it ended a long time ago. Where growing up is forced on the unwilling because the sun’s so bright, a color hotter than white, and the cactuses and octillo and mesquite are waiting. Patiently.