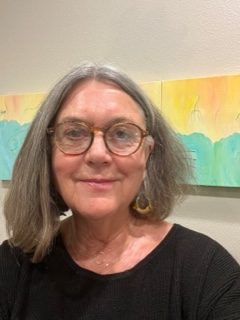 What got you started:

I have no idea, as there seemed no other way. I have always been entranced when looking at art. I visited the Chicago Art Institute many times as an older child, then well into my teenage years, and I was spell bound and thought I can do that. And in my later years, I felt my poetry was an extension or a further part of being an artist, like just using words as exploration instead of a brush, or an artist’s tool, so my words as poems are very visual and often become surreal because of that, while I look at my words whether in the air or on paper. Actually I think my mentor is the world around me, what I can see. 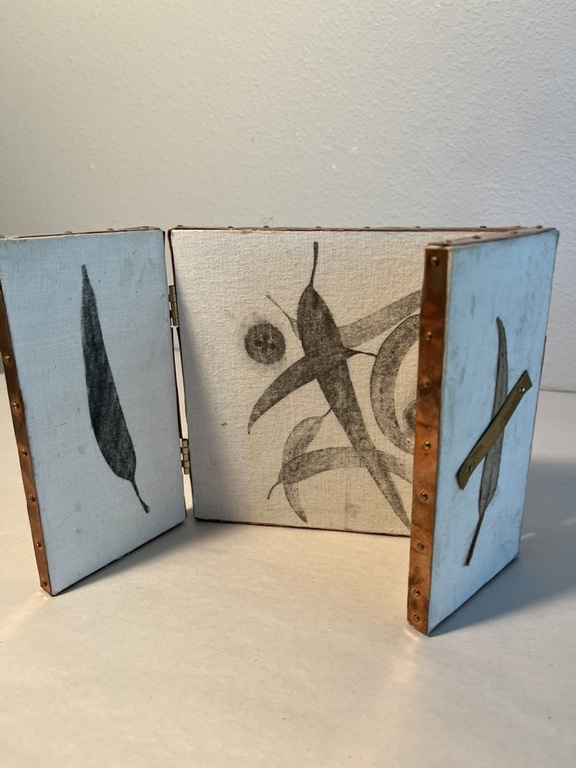 It is not easy being an artist. When I was young my father told me that no one else in our family could be a writer or famous as he was. So, my own expression as a young person was kind of hidden until I was older like in my late 30s and 40s. I find that poetry is just another tool to use as an art form and often my artwork is entitled after poems and the poems are written on the back of the canvas. In reality though most often my poems come from something visual that I’m viewing.

I make art everyday nearly, whether in my cooking, or my scribbling, or my brush strokes. To make physical art takes time like sitting at my work table or an easel with a canvas or a pad of paper and taking the time and energy to get it down, to take the paints to paper or canvas, and mostly it just seems easier to write it down, whether I talk into my phone into my notes to record my feelings about something I have just seen. One poem I love was when I was driving over the Broadway Bridge and the incoming lane had a person wearing a captain’s hat and his hair was like wings and that became a poem about his journey taking some ideas from Shakespeare’s play about a boy who ended up on the wrong sea and the wrong island…or so I can make up parts of it as I am writing the poem.

My life fell apart in Montana after thirty years of building (a relationship) and building a passive solar house without central heat where I raised my family. I burned a lot of drawings and paintings and poetry and, wow, that felt good. But, I hope never to do that again. There are two boxes that are books in the work you have for this 29th edition that are about the money that is on the walls but then they collapse when you remove the lid to expose the inside of the collapsed walls. Which they then do.

A great adventure I had was a juried contest I won of painting two different life-sized (plastic) horses and was awarded the project two different years. It felt incredible to paint with my hands over a three dimensional life-sized sculpture as if it was cave art. The first one is at the Billings Public Library in Montana and was mostly about cave art and the beginning of text, so it concerned the transmission of words and art through those expressions. It’s name was Petroglyph, or Pet, the second one was named Lily and it resides on a ranch in Wyoming standing amongst the field grasses and like water with water lilies like Monet’s, but mine weren’t nearly as good because when you look closely at Monet’s they are very abstract and must be viewed from a long distance away. So, to me there is no limit to what art is and how to make it.

Does my art complement or contradict itself? I have no idea, but I doubt it. I don’t actually see a thread or a vein of thought like they aren’t scenes at a cabaret…or farm scenes. But clearly nature and the sea are always with me as a source. 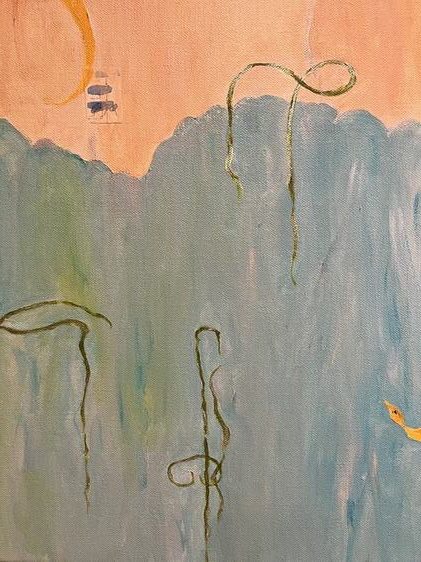 This is a nice idea and there certainly is that. I have a painting series of six panels where all are taken from a poem and each can be seen entirely on its own from a line in my poem. I also like handmade books with paintings or drawings. For a while I was interested in handmade paper and made many things, like exploding mushy pulp as it was trying to become something but ended as a sculpture. The handmade book in the photos for this 29th edition is all my own paper with pages couched together with string running through it to hold two paper sides couched together so there is writing and paintings on each side and it becomes an accordion book when folded. It was very technical to make and took a lot of trial runs. Then I made a slipcase for it to protect it and give it honor. Besides cave art and indigenous art which have been an influence, having lived in the West for forty years, I also love the abstract expressionists for their mystery, energy and spontaneity.

Certainly, my ADHD has been a “distraction” because I can tend to wander from one thing to another, which is probably why I am a multi-media artist and poet. Thematically is a good question, but not to sound like a cliche, I insist on complete originality. In other words, I create new stuff, always, but I do see nature (not as a cliche, for I even hate to use the phrase, “nature”) and it is there, and love its originality, and love its insistence, and its forms and languishing moments as moss or seaweed or tree. 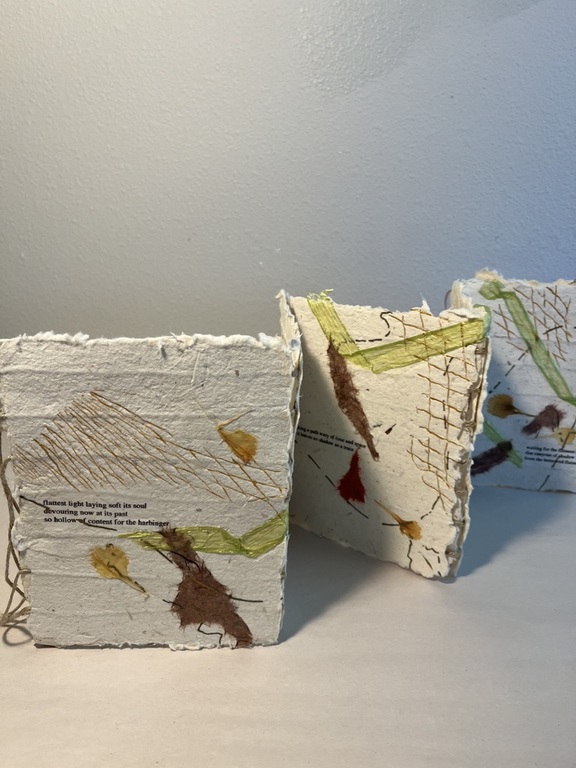 This is certainly a loaded question. Aesthetically I insist on the very original which is why I cannot write in a form. I have to do my own thing and like to see the poem on the page for its newness and its look there, which is one of the beauties of written poetry. I have a hard time listening to poetry because I cannot see it and my mind wanders to other things. Maybe that is why I have made a few painting series’ from a poem as each panel represents a line, therefore making them intertwine, but each panel can be seen on its own.

Thematically, I don’t care what something is about just so long as it is as fresh as can be and aim to be hauntingly original.

What Effect on the viewer:

There, again, I have no idea, I just do it. But, it might be transcendental. I want others to be taken away from where they are, to be transported to a place where an individual can feel something extraordinary (just as poetry does) so that that impetus results in a journey of their own creating new thought or can bring out latent curiosities that we were not aware of…I too am on that transformational journey through poems or artworks creations. What a great way to be to not be in your own time or place and to nearly forget all physical endowments that imprison us in somewhat of a good way, but to go beyond and transcend what you were not aware of and go somewhere else. Whether through paper in text or paint or written on a cave wall or in the fog on your window screen. 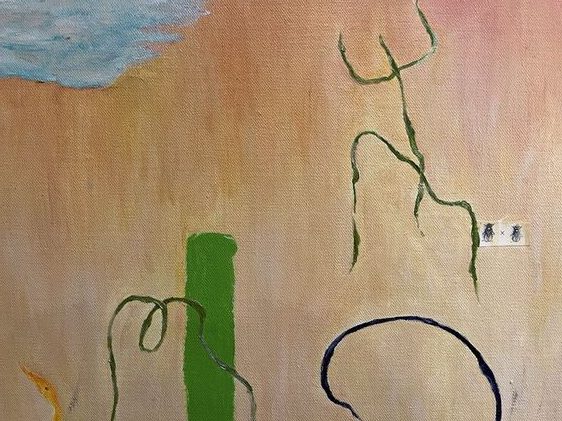 Truly, none that I know of, but workshops, whether at PCC or Salon Argyle or other poetry groups around town are a beautiful source and always entirely welcoming. In Montana, where I was an active artist and taught some summer courses at Montana State University, I created a collective communal gallery which existed for seven years showcasing rotating artists, but it was always kind of competitive and I felt a huge amount of jealousies, but lighting a candle, even though rather cliche, is always a good start. Sometimes I like to get in the car and drive somewhere quiet and park and look around and there it is–the creativity is right in front of me.

So, work-shopping, as far as I know, at least in the poetry groups is mostly open and loving and kind and truly I have felt it to be more friendly and forgiving through poetry than any visual artists I have ever been around. I might be slanted in this view because emotionally I was not in a very good place in my previous life in Montana. All of that has changed and I feel I have been accepted graciously in Oregon.

Truly, get involved and make a physical contribution to groups, whether artists or poets or anything… “Just show up.” Actually this comes from Microsoft’s original, Bill Gates. But, I have found it to be true, no-one is out there to judge you, but mostly you are welcome just by the fact that you are doing it. There is always room for improvement, and for doing, and for creating, and for refining, so start anywhere. No matter what age. Just do it. One can always make it better, but doing in the first place is the jumping off place into the wonderful fascinating abyss of creativity that is only given to us human beings.

TCR: Thanks Diane for sharing your art, your poems and your time with us here. If anyone would like to see more of Diane’s work or inquire about purchasing her artwork, her web address and contact info can be found here: https://dianencorson.wixsite.com/dianecorson/artwork 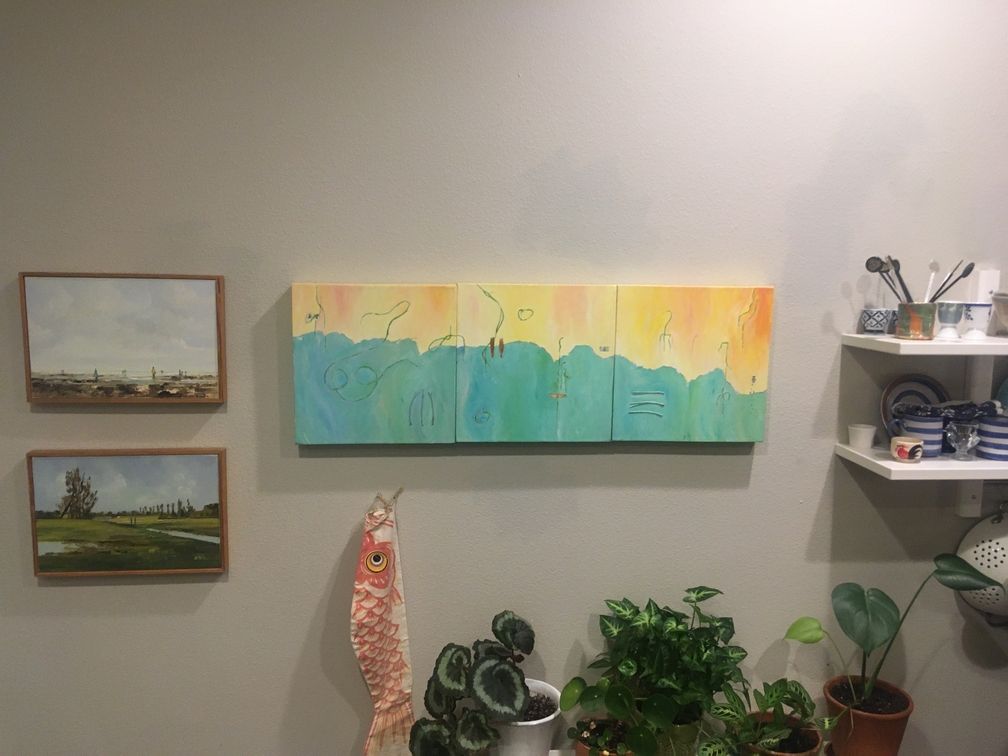