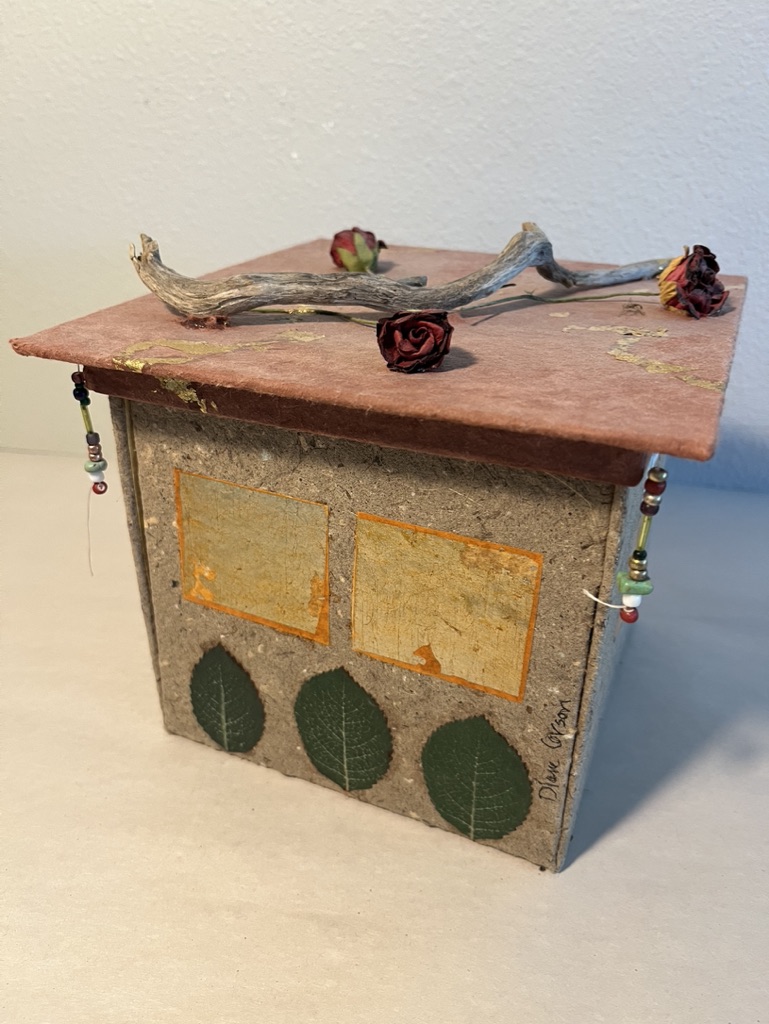 Honey This and Honey That

but no room for mistakes.

During supper, Uncle Eddie dunked huge chunks
of bread in his soup and gulped it as fast as he could.
It turns out he’s already back in the TV room.

“Would you like some spumoni ice cream?”
Aunt Erma takes a big dish in to Eddie.
She brings me a tiny porcelain cup
with a minuscule spoon.
There’s something peculiar about this ice cream.
It tastes kind of fuzzy—hard little bits in there—
I spit out and hide in my napkin.

This entire house smells of air freshener.
My eyes water and I feel a coughing fit coming on.
I need to leave soon just so I can breathe.

Aunt Erma brings me something
in her withered hand—
a doll the size of a hummingbird.
One foot’s gone missing.
The glass eyes are glazed over
and there isn’t much hair left in the straggly wig.

“When I die I’ll leave this one for you in my will.”

I can hardly wait.

Dale Champlin uses the opening words of the title transitioning into line 1 – but no room for mistakes -to immediately conjure a tightly wound and critical person.

Uncle Eddie’s gluttonous consumption and hasty retreat from the family dinner provides a stark contrast with Aunt Erma’s parsimonious offerings.  The use of tiny, miniscule, peculiar elicit a sense of smallness, of discomfort. The hard little bits and This entire house smells of air freshener… uses sensory elements to further evoke a sense of claustrophobia.

A really interesting poem, filled with contrasts.  I like the atmosphere you created.  A bit stifling. An urge to leave. Aunt Erma takes total care of Uncle Eddie, but pays little attention to the speaker who gets only a tiny portion of (dreadful) ice cream and a doll that will be hers when her aunt dies.  I laughed at the image of putting the ice cream in a napkin. I certainly did that as a kid. Should the last line of the third stanza read “I spit it out?” I also like the snarky tone of “I can hardly wait.” I think you could delete “huge” in the second stanza or find a different word. Or what about “hunks of bread?” Ditto “as fast as he could.” Maybe something more startling or a metaphor. I like the description of the ice cream as “fuzzy.” Totally original. I can feel the bits on my tongue. And your description of the doll, which seems to apply to Aunt Erma as well as the doll, is wonderful. I really enjoyed this poem!

How do you live a life where there’s no room for mistakes? And what does that do to you? Mistakes – to be intended as breaches, disobediences, transgressions relative to a certain code of conduct and expectations. That’s Aunt Erma in a nutshell; that’s how she has been portrayed: not a foot wrong, not a sign of discontent, not one shadow of a doubt, let alone defiance. And to what end?

There’s no sign of pride or glory at the end of Aunt Erma’s road; a withered hand is all we see of her, and it’s enough to build a whole picture. In the same way, we know she will survive Uncle Eddie, whose gluttony will probably cost him dearly. Still, that won’t mark her freedom, but even longer days and lack of purpose. We witness probably her first and only claim and attempt, if not to rebel, at least to assert a will of her own: sure no one is listening, she whispers her intentions to leave in inheritance a little battered doll from a lifetime ago when imaginative play and dreams were still accessible to her – a doll now looking more like a curse for the next generation of women.

Thanks, but no thanks. The poet won’t accept the same fate, and in the last line, more than wit, we hear her unquestionable attitude toward emancipation.

No room for mistakes; the question left for us is: how many gallons of Tipp-ex have we been allowed to pour over the typos of our lives? Better not to look; let’s call ourselves lucky and hide our faces behind the apparent paradox (some great philosopher must have come out with this) that a life with no room for mistakes is a mistake in itself.

This delightfully disturbing poem consists of small moments and observations that add up to an indelible character portrait—two portraits, actually—of some of the author’s relatives, those loved ones she did not get to choose. It starts with a bang, a wry title that is immediately contradicted by the opening line, which is also the entire first stanza.

The second stanza tells us all we need to know about Uncle Eddie, that he wolfs down his dinner to get the hell away from Aunt Erma or his niece (the author) or both. He’s one of those relatives who spends family gatherings watching television.

Now Aunt Erma takes center stage in stanza three. The idea of food as a metaphor for love gets full play here as Aunt Erma brings Uncle Eddie a “big dish” of spumoni ice cream but gives her niece “a tiny porcelain cup / with a miniscule spoon.” This turns out to be a blessing because she finds the ice cream inedible anyway.

Stanza four tells of the discomfort we experience in homes where the standards of hygiene, and the means of achieving it (in this case, ubiquitous air freshener) differ from our own enough to make us feel sick. One can’t help but surmise that this is partly a psychosomatic reaction, and understandably so.

Stanzas five and six are a matched pair, setup and punchline. First Aunt Erma shows her niece a rather horrific doll—tiny, hobbled, blind and almost bald. And then she promises to leave it to her niece in her will, which sounds more like a threat than a blessing. When the author ends the poem as she began it, with a one-line stanza (“I can hardly wait.”), the character portrait is complete. Oddly enough, though I can’t defend the thought rationally, I feel she still has affection for these people. She is visiting them, after all, despite these amusingly off-putting traits.