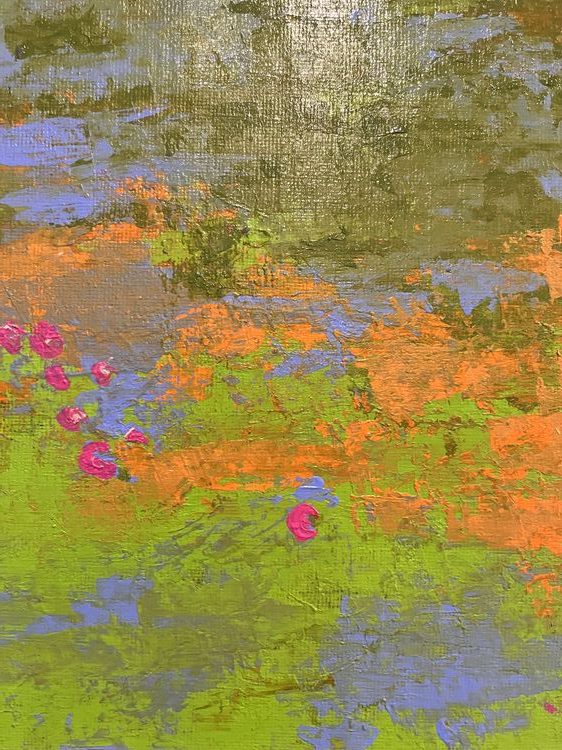 I was tangled
in the hem of it.

After rain,
petrichor.
On my knees
in my petticoat.

I dug in mud
in the gap
between call
and response
of doves,
mourning.

Once, a whistle
of wingbeats
ripped the pleats
of earth’s skirt.

Not today. Today,
dandelions dawdle
to seed in quiet yards.

My mouth hollows
an empty vowel.

Silence mires the person metaphorically on their knees, in mud. Unable to rise. A fleeting memory of “Once, a whistle of wingbeats ripped the pleat’s of earth’s skirt” then segues back into inertia and a feeling of hopelessness. Vasso’s poem successfully creates loneliness in the sensory lack of sound.

By the spell that only a good poem can cast, we are transported to the still moment, in the hollow, ousted moment, tangled; the choice that propelled us there was made long ago, and there’s nobody left to blame for it.

I dug in mud: we will move in a reticence of burial, ours, and deferentially we will measure our efforts trying to fit in the natural rhythms around us, in the gap between call and response, as we will recognize their significance for the first time.

Empty vowel: nothing more than an old box of tricks, our alphabet will have left us, exhausted its power of telling the world. Thrown out and destitute, our bluff, called: without it, well, finally, no more bullshit but silence, where dandelions dawdle to seed and wilderness will have reclaimed its time like a new pollination operating in the new theatre of yards we will have left behind, finally quiet.

In that day of silence, we will mourn the loss of our past-self and privileges, of a time when the pleats of earth’s skirt used to open for our pleasure. We will listen to a new sound, firmly dug in the present moment, every sense exultant in the hem of it.

Each image tells a profound story; put together, they point to adaptation to a more equalitarian relationship between the five senses and the elements. I’m really thankful for this poem. We are in a not-too-distant future, in a probable present, mute, touching distance from the discovery of our lifetime. On our knees, barely dressed, exposed, the power of choice seems to have been taken away for good. But there’ll be no guilt because no sentence will be pronounced; it will be just another phase – call it evolution if you want.

But it will end, a dissonance will come, or the breath fail better still, I’ll be silence, I’ll know I’m silence, no, in the silence you can’t know, I’ll never know anything. But at least get out of here, at least that, no? I don’t know. And time begin again, the step on the earth, the night the fool implores at morning and the morning he begs at evening not to dawn. (Samuel Beckett, Texts for Nothing, 8)

Stuff happens beyond our hearing, and this poem is a fine reminder that while hearing is awesome, it’s not all.

I’m intrigued by the conceit of the hem/petticoat/skirt. And the narrow, dripping form. There’s some mystery here that I don’t fully understand, but I certainly feel the mood of languishing and disconsolation… it puts me in mind of Anna Akhmatova.  I would have loved to be a fly on the wall when Vassos wrote “Once, a whistle/ of wingbeats/ ripped the pleats/of earth’s skirt”- I hope she put down her pen and celebrated.

As a reader, I found this poem to be very pleasant to hear aloud.  The words sounds and slant rhymes were very appealing; such as, dug/mud; whistle/wingbeats; earth’s/skirt; dandelions/dawdle; and the lovely long vowels of mouth/hollow/vowel at the end, which causes the read to form that shape with the mouth that is also hollow and potentially silent.  I found the lineation and short lines kept the movement fluid like the rain or the whistle and even the silence. I enjoyed the choice of words like petrichor and petticoat, neither of which show up much in casual conversation but lent a certain elevation to this poem.  If I were to allow for one critique, I would say the title could have done a little more heavy lifting, but really that’s a minor quibble.  Overall, this reader found it to be a lovely and well-crafted poem.