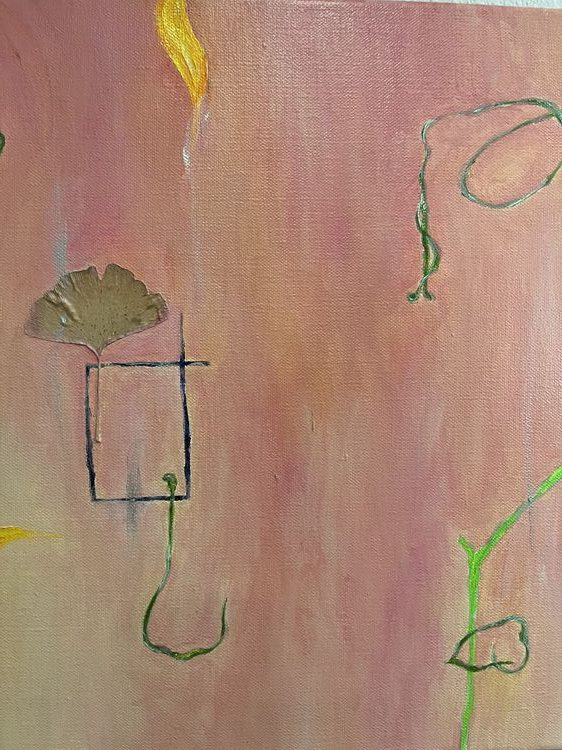 I loved the orderly procession
of stamps stepping shoulder to shoulder
across the page. I took the green stamps
from my mother’s purse when she came home
from the A&P. She showed no interest, wobbled
to her room slugging a bottle of Jim Beam, leaving
groceries on the counter. Melting ice cream
I spooned from the container.
Shredded wheat I fed to the dog. I loved
pulling the stamps apart, licking their little backs
and pasting them into the pint-sized booklets.
I couldn’t wait to finish a few books and race to the store
to pick out a prize: a set of six wine glasses, a Zippo lighter,
a pink ashtray. It didn’t matter. It seemed like magic.

I wouldn’t mind spending some time each day
with familiar sheets of green stamps
and a booklet picturing a cheery family of four.
No alcohol in sight. No sharp objects or vials of pills.
The comfort of always fifty squares on a page,
never forty-nine or sixty-two.
A meditative practice like the sand mandalas
of Buddhist monks sending healing,
peace and purification into this worn
and weltered world. I could do that.
And  maybe I could trade some stamps
for a Swank Key Ring with a nail clipper
or a Bathtub Tray with a back scrubber.
No credit card needed. Magic.

S&H Green Stamps caught me and reeled me in. I felt myself going back more than thirty years, to a time when it was considered acceptable to collect those little green pieces of paper with glue on their backs that had to be licked. They are a relic of a bright history, a bit of Americana where no one would have trouble finding pleasure and in some cases, pain, as this poem shows, in remembering the way they played a key role in many memories of a time when life may have been simpler, as green stamps do in this poem. But life was complicated by alcohol and perhaps other drugs. The speaker in the poem shows the magic that can be brought to life by imagining the special meanings green stamps had for so many, as they did for those who followed the practice of collecting. A special aspect of this poem is how it shows green stamps to be the anchor of the narrator’s life as the mother is depicted and the poem continues to “a meditative practice like the sand mandalas of Buddhist monks sending healing, peace and purification into this worn and weltered world.” I agree with the speaker in the poem: “I wouldn’t mind spending some time each day with familiar sheets of green stamps and a booklet, picturing a cheery family of four. No alcohol in sight. No sharp objects or vials of pills.” The green stamps offer the narrator a chance to reflect on the troubles that the family had, or maybe it is remembering to cast out the sorrows of a childhood. The green stamps are a way to note a kind of family drama in which the narrator makes no judgement but reflects how a certain kind of practice of collecting something of value helps the family – or at least helps the narrator. I did some research and found that if one still has some green stamps, they still can be redeemed. This fact adds to the mystery and beauty of the past that is added to a family history. This is an excellent poem.

Scott’s prose poem allows her child self to escape the reality of a chaotic home life caused by a parent’s alcoholism and neglect. Green stamps are the passport to order and control, to self soothing through retail therapy. The child understands the temporary thrill to be had is not real, it is magic, but the magic is enough to sustain. This story telling poem uses the voice and feeling of a child to evoke compassion without being overtly emotional. The green stamps are a symbol of hope and resilience.

Children can instinctively find a way to evade – a show of their unmatched, primordial resilience and will to survive. Here, a ritualized game of clear boundaries and unchanging expectations brings some semblance of order. When chaos over which the child has no power is the norm, predictability will become the new magic.

The act of collation, as a way of asserting her control, the feeling of achievement, the so much-needed certainty of a fair rewarding system: these are magical hours spent away and elsewhere. When you think of it, a schema based on order, tenacity, and honesty over credit score (funny name for debit score) would be magical indeed. In its essence, is our writing that different from collecting stamps? I know mine isn’t.

For me the duality of magic and order is the wonderful way this poem mixes.  And it’s so human to want both the magic and the order—that’s what makes the poem so keen.