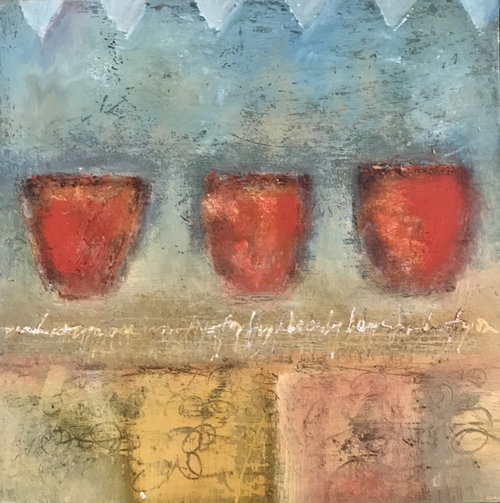 Laurie Doctor, What you are waiting for has already
begun, Oil on Wood, 5″ X 5″

The Trouble with Macaques

“When the monkeys there surround you — not if.” James was telling me how to navigate parts of Delhi. “It’s not like here. These monkeys are mischievous and curious, but they are Buddhist monkeys.” Most of the people living in Dharamsala are also Buddhist.

Not that the monkeys weren’t trouble. Yael Ben-David and the teens from the Orphan Village created a mesh wifi network to cover the lower Himalayan valley only to have the macaques test the mesh by climbing the antennae. The male macaques weigh as much as 26 pounds. The poles couldn’t take that. After about the fifth tower snapped and dumped a monkey on the rooftop like Icarus at the end of his flight, there was some re-engineering, some added baffles, some calls for patience before the wifi mesh was live again.

The wall painting on the way to the Dalai Lama Temple showed monks patting monkeys, a show of friendship. James explained, “In Tibet, there were no monkeys like these. Still, we believe that good monkeys will be humans, even monks, eventually.”

Back in Delhi, the deputy mayor fell off his balcony. He was swatting at the troop of maybe 50 macaques that came uninvited to his dinner party.

Back in Delhi, the new subway was halted when three macaques followed commuters into one car. Panic ensued among all the species of riders.

Back in Delhi, the hotel hired a langur walla to protect its entrance from marauding monkey troops. The sight of one or two large langurs, larger than their cousins and more gentle, more Buddhist, makes a troop of macaques reconsider their route and take their business elsewhere.

Back in Delhi, the use of langurs was declared illegal. Young men are hired to dress as langurs. I saw them sitting near the subway, watching YouTube, hoping to learn how to be convincing in their roles.

The third paragraph offers the buckle: monkeys can become humans. This connection has been established earlier in the piece, but from that third paragraph the piece works to more enthusiastically develop the association, and does so with wonderful vigor, particularly the use, the illegality, then the youth hired to impersonate (immonkeyate?) the langurs.