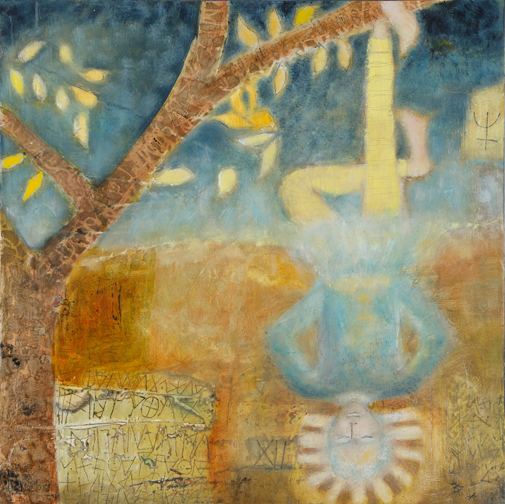 In the Event of a Loss of Cabin Pressure

The specificity of the title of Beth Gordon’s ingenious poem establishes being in an airplane when there is a possible loss of cabin pressure. The poem is a response to falling from the sky and appears to offer a consolation should that happen.

It starts with one passenger telling the narrator to “trust the equation,” the intricate balance of machinery. The “geometry of a praying mantis” stresses that despite the mathematical precision of the airship, its impressive instruments can malfunction and cause destruction. The articulation of a praying mantis is an emblem of both science, the well-constructed airplane, and also a supernatural appeal to safety. Despite the “equation and “geometry,” the mantis’s “bulging eyes” view the passengers as victims of all this scientific efficiency.

The third sentence suggests a clear scenario of doom, or false hope, for even when you do trust the equidistance from “tip of the tongue to…the left clavicle,” still it equals the number of “mice skulls at the bottom of the well”! A crash could occur despite the remarkable machine, even despite the mantis’s secret mixture of fluids that could correct the drop in cabin pressure with an almost alchemical appeal. Such machinery traveled to the moon and “still dead on return” is puzzling, but suggests the machine can lose altitude, or be retired on return. The pilot might be the traveler and “she” the airship with the geometry of the egg-laying praying mantis. The passenger that trusts science measuring, weighing, counting is science’s “only god” predicting “the moment and manner” of death. But wait, the loss of cabin pressure may still be corrected by the mantis’s prayerful posture and her “saliva,” the “elixir,” to prevent disaster for the otherwise doomed mice skulls!

This is a deceptive poem of consolation, almost a praise of science that in turn can destroy its victims. The odd request for trust at the opening turns into a prediction of doom. Despite that, there still remains hope for the narrator’s lack of faith in science, the fail-safe of supernatural intervention, the double role of “the mantis” praying in the last line. The poem is a puzzle. I hope too many pieces are not forced together by this interpretation.

I remember as a child seeing a slow-moving praying mantis at P.S. 36 in the Bronx on the all-concrete school yard and someone yelling, “They’re protected! You’ll get fined if you kill it!” Its efficiency I am also reminded of today in a video gone viral this May of a praying mantis pouncing on and emptying the skull of the newly arrived “killer hornet” in just 54 seconds.

The conceit here within this cube of a poem, achieved via proportional spacing, is that the mantis has an almost magical relationship to life and death. The mantis, perhaps a Kali stand-in complete with skulls albeit mouse skulls, is at once mother and destroyer, but also a supplicant in prayer to the poem’s addressee.

A captivating poem. I love the opening line. And all the math terms: “equation,” “geometry,” “parallel,” and of course “the distance from the tip/of my tongue to my left clavicle is/perfectly equal to the number of mice/skulls at the bottom of our well.” I love this last one. I actually wanted to see this theme carried through the rest of the poem. Maybe add a math term to the line “The elixir of her saliva..” such as “The elixir of her saliva divided by….” Just a thought. The ending is fabulous, especially the last line. And a great title!

The warning of the title—and the tiredness of that warning—contrasts wonderfully with the weirdness of the poem. The title, a conditional that opens to a consideration of various other possibilities, is stuck against what at first seems like a scientific, mathematical sure thing. As the images continue in the poem, and despite the square delivery of the form, it’s clear that the equation we’re to trust might not be as certain as the you tells us. Rather, the reversal of the insect and human that transpires over the course of the poem, and because the images reveal how the human seeks but doesn’t ultimately answer, illustrate that, for all our method, we still have to work by faith, the preying and the praying.