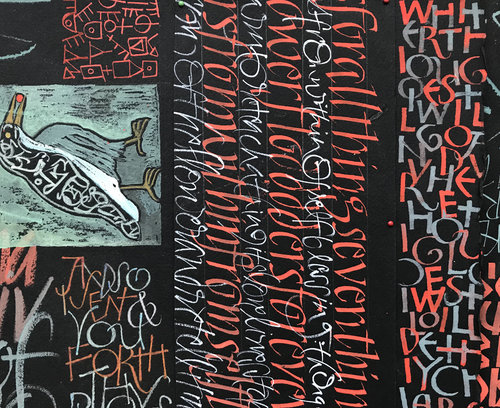 Laurie Doctor, Detail of Book Cover
from a Teaching Workshop

An amputee sitting next to me on the train keeps a one arm vigilance over his stump—that though I steal a glance at it, it is not long enough to allow it to sprout in my imagination either a hand or the missing fingers. I am always intrigued by missing body parts—intrigued over their place of absence. Now he’s covering up the stump with a magazine, a cheap magazine. I wonder who chopped off his hand. And for what reason—stealing? Merciless thought. But no mercy can put the hand back on. So why not! It is a godless loss, and no god can restore it. But why doesn’t he have prosthetics done? But then what of my natural impressions, what would that artificiality do to them? Do you suppose he had me in mind when he didn’t have the work done? Maybe my response that he’s feeling now is a deterrent to such restorative thoughts. And maybe he keeps it unclad and exiting pinkly and swallowed (it looks as if the skin is swallowing itself) just to stir my imagination. Droll thought, but that is not all! What if I just reached over and kissed it!—do you think the moisture of my lips would animate it, make it grow fingers!—that would reach into my mouth for my tongue and pull on it admiringly as a lifesaver? A no more repugnant idea could occur to me. And that is just why I think it. There he’s covered up his arm again. Earlier he tried smoking, and now he’s stopped after I coughed in my throat—a forced cough—he put it out half-lit. He must have some feelings. I imagine a relationship between us. Perhaps a friendship over his handlessness. What an intimate basis for friendship to take hold, where my thoughts grasp what his body can’t handle. Now he’s pulled his sleeve down and is leaning over it with his free arm. He’s playing the maiden, I can tell—but this time I look the other way.

Richard Krause has an enjoyable way of weaving honest thinking with an innocent playfulness. It is the same authentic curiosity we see in a child, ever so aware of the world with a wonderment, even if our later adult political correctness would silence such knee-jerk judgements. The voice here makes conclusions, while realizing such conclusions can change, and finds an attractive bewilderment to that new awareness. “An Amputee” is a journey, not just on a train, but as the speaker realizes others in the world, and their idiosyncrasies. Seems the speaker longs to place a definition to what these lives may be, and yet with a sense of eventual acceptance in what, or hopefully who, can be found. It is a fascinating poem that meanders at first as if a lonely journey, but it becomes a comforting presence of diversity, despite differences, realizing one is not ultimately alone in this shared world.

That said, there is also the honesty that such intimacy is not necessarily easy to sustain. In many ways we are all missing some parts. And finding connection is not honestly easy unless we are accepting of our own shortcomings enough not to look the other way. Plus, so much has been written about regarding the judgmental, the noticing of the speck in another’s eye and not realizing the log in one’s own. Sometimes the realizing of the log is simply being aware of one’s own amputation.

Some of the wordplay here is lots of fun, and the questions lead to an ironic stance for the speaker who at once inhabits the kind of considerations any person might make when confronted with another person, and yet also allows the reader to critique a culture bent on seeing another only through one’s own questions and considerations. The poem’s fine work to accomplish this double reading is ingenious.