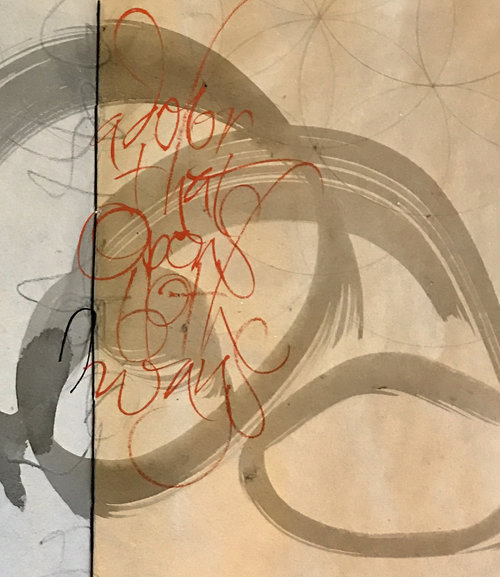 Laurie Doctor, Door that Opens (Detail),
from the Sketchbook

The Hidden Buddhists of Baikal

Stalin, as Stalin was wont to do, gave land for a large temple to the Buddhists in Buryatia, then he had all the lamas shot and the temple looted a few years later.

My hosts took me to a steep hill overlooking the clearest water I have ever seen. Across Lake Baikal was Buryatia. The land looked a lot like this side of the lake. The Irkursk side. I could see a few children on a school holiday grouped below me on the lake’s edge. I could smell the fish being grilled. I could see a little of the charcoal smoke that the breeze carried up and over the lake. Or was that a mist, a cloud, a haze on the lake? A reflection of what was above on the clear water?

On the trail down from the hill was a scraggly tree, wind-bent stripped of leaves for the most part, but still alive despite its appearance. Bright and once-bright rags were tied to the branches. Some had a script or an imitation script on them. Some had little sketches of men seated in what could be lotus position. On one rag, the sketch showed such a man floating above the lake, or on the lake ,or even under the water, unbreathing as he sat suspended in the clear cold fluid.

“Are those Buddhist prayer flags?” I asked.

“No, those are from shamans. From aborigines. From those that don’t know much. Some hid out north of Baikal until the fall of the Soviets. But over across the lake in Ulan Ude, the Tibetans are building a new temple. A lot of shamans and Buddhists are showing up there.”