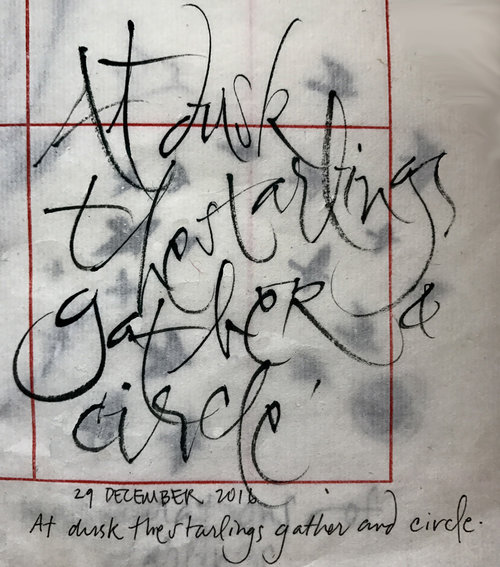 Knives So Many Knives

Knives so many knives in my childhood home.
My father collected weapons and left them lying around,
a mace on the landing, blowgun by the back door,
sling shot with steel pellets on top of the microwave, used to keep cats out of the yard,
alongside the recliner a stun gun that he would regularly fire just to hear the jolt,
umbrella stand filled with cutlasses and machetes and spears and javelins
and several rapiers concealed in canes.
In the basement he had a target for throwing stars.
In his bedroom he would sleep alongside loaded assault rifles,
boxes of ammunition in every caliber pilled in every available space.
After dinner he would lay in front of the television disassembling, cleaning, polishing, reassembling.
Regularly the sound of sharpening would fill the small house,
blade against stone,
rhythmic rough metallic passes
up and down
up and down.
He would know that they were sharp enough when
they could easily shave skin tags
off his arm.

Zieja’s father is known here by the company he keeps. That is weapons of all kinds. Not just knives so many knives” but almost anything that can cut, maim, inflict pain, or kill. They must be kept ready, kept clean, kept sharp. But why? That we don’t know from this poem. We do know that other than cats, that will in theory be kept at a distance thanks to a steel pellet or two from a handy slingshot, no one has anything to fear—yet. Well someone does. Zieja’s father slices off his own slight imperfections, skin tags from his arm. A knife is sharp enough when the unneeded and unsightly are easily disposed of.

A fantastic, spine chilling poem! I love the opening alliteration: “left,” “lying,” landing.” We just slide into this poem. You make it sound almost normal to have a mace, a blowgun, a sling shot with steel pellets, a stun gun, cutlasses, machetes and spears and javelins, along with rapiers and loaded assault rifles. I do hope this is not your story. I think “he slept” is stronger than “he would sleep.” Ditto “he would lay” could be “he sat.” I like the image of the Father in front of the television, “disassembling, cleaning, polishing, reassembling.” The short lines at the end work really well, especially “rhythmic rough metallic passes/up and down/up and down.”

I felt the layers of threat as you kept adding more and more weapons. I think the ending could be more menacing. I felt a bit let down it ended with “skin tags.” But again, maybe that was your point, that there really isn’t much of a threat here.

The hyperbole of the list and transformation of the house to a magazine is wonderfully counterpoised by the specific grittiness of the final image, “they could easily shave skin tags / off his arm.” As the reader hits that final image, what was considered hyperbole then must be reconsidered: the father becomes a militia and the house becomes a nation. The tags run a wonderful double between small flaps of skin, military identification tags, and the labels used by morticians. The poem succeeds because of the complexity of the mix of the hyperbole, the specific imagery, and the metaphoric ripples.