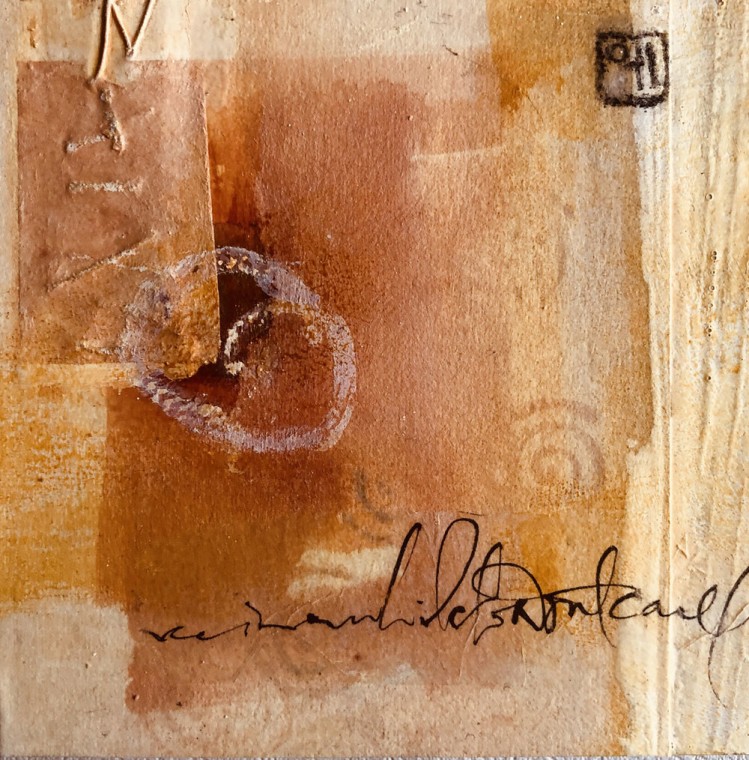 Light unwoven at the edges The loom

shows around it I keep paring down Soon

nothing will be left Will that make me free

or just poor I swear I hear the waves I hear

the giddiness of starfish The legions line up

to reduce me All the reactive centers All those

handwritten letters sent away from my own

heart Sob in cascades cooling to the dew point I

exhale I breathe in golden light What does this lie

sound like if I listen through it to the generating

source? If I listen through a cataclysmic smile?

What star waste sailed a chambered vacuole to the

till it nosed against the outer wall I can’t pull

my color back up against gravity There is

no one waiting up for me to make sure I

reach my destination On earth the birds

with golden bellies flit from bush to bush

What a delight to run into these three poems by Oni Buchanan. I am always attracted to work that foregrounds invented or broken form and graphic design over content. I love the risk and surprise that awaits. The sense that a new bite of consciousness is about to be mapped. “A Chambered Vacuole” is such a poem. It works the dynamics of the isolated line which suggests that the poem will move forward via complete thoughts more or less down the page in the same duration. Beautifully, Buchanan undoes this by removing punctuation and then playing with phrase length and caesura. This propels the poem across and then powerfully down the page. It has beats. It also has dynamics as it moves between statements and questions. A dynamics there that has its roots—I always think—in song form and the Shakespearean sonnet. It’s percussive (I’m not surprised to find from her bio that she’s an accomplished musician). I’m also not concerned that the “about” is somewhat occluded here—this is not a transparent lyric narrative—but there are so many other pleasures to experience. The rhythm carries me from beginning to end and brings me back to this poem.

Light, sea, space, earth, and human converge here. On the one hand, the loom, a human-machine, is not weaving, but is allowing the light to be unwoven, just as the letters that have been sent seem to elicit no meaningful response, just as the starfish, a being very like a cell and very unlike (in some ways) people stands in opposition to the speaker. That sense of disintegration begins the poem, but the speaker then turns to how to hold it together, how to make life mean, and turns to a larger consideration: the source, a final ending that is also kind. These considerations offer no real answer—just a parcel of waste, like a vacuole nearing the cell’s border. Instead, the speaker understands the individual’s work against meaninglessness, just like the birds, partly golden, staying on the wing. It’s a sad poem, but the movement from cells to celestials is beautiful and reminds me that while life can be tough, it also has it’s consolations, especially in movement and light.

I’ll just state up front that I’m a little in awe of this poem, and like more than a few of Buchanan’s poems, I don’t quite have it figured out—some unifying piece is missing which is a mix of delicious and frustrating, in this case I think that might identify precisely who or what the speaker is. Could there be more than one? Sometimes you realize that you fail a poem? That the poet or poem knows something you don’t and the poem is built around that one thing that if only you knew the whole thing would come together? Even so there’s no doubt this poem works and tantalizes and mystifies. The title takes us to the cellular level: a vacuole is like a storage room within a cell to sequester waste or store water or necessary molecules. You get a sense of the resonance metaphorically of a ‘cell’ with a room in it that contains many more rooms? Cell meaning bounded space, as in organism or house or jail or monastic cell? Or simply perhaps a planet which contains, conducts or maintains life bounded by limits? In connection with that there’s a strong sense that this speaker isn’t bounded terrestrially—Light unwoven at the edges [suggesting a galaxy]…star waste...I can’t pull my color back up against gravity [suggesting a black hole?]…reach my destination On earth the birds [suggesting one speaking not of earth? God or some other extraterrestrial speaker?]. What secures the ambiguity is the micro and macro contrasting with the personal ‘I’ speaking, and moral nature of the inquiry or lament of the speaker and some of the terrestrially fixed nature of the details: Soon/ nothing will be left Will that make me free/ or just poor I swear I hear the waves I hear/ the giddiness of starfish…handwritten letters sent away from my own/ heart Sob in cascades cooling to the dew point…correspondence which results in a meteorological event?

What I sense emotionally from the poem and speaker is a quest or journey with high spiritual or existential stakes that aren’t necessarily limited to the human (partly because of the repetition of light—light unwoven, breathing in light, color snatched away by gravity), moral questions (Will that make me free? What does this lie sound like?), conflict (legions line up to reduce me), a loneliness (no one waiting up for me to make sure I reach my destination), and a longing or nostalgia for beauty or common earthly things (giddy starfish, birds with golden bellies). What does it all add up to? An extraordinarily ambiguous, mysterious and beautiful poem that I simply admire without feeling the need to continue trying to figure out and make mean. A day or so I came across this line from Franz Wright’s prose poem, “Litany:” While we slept, we are made of the same things as stars, sang our cells.