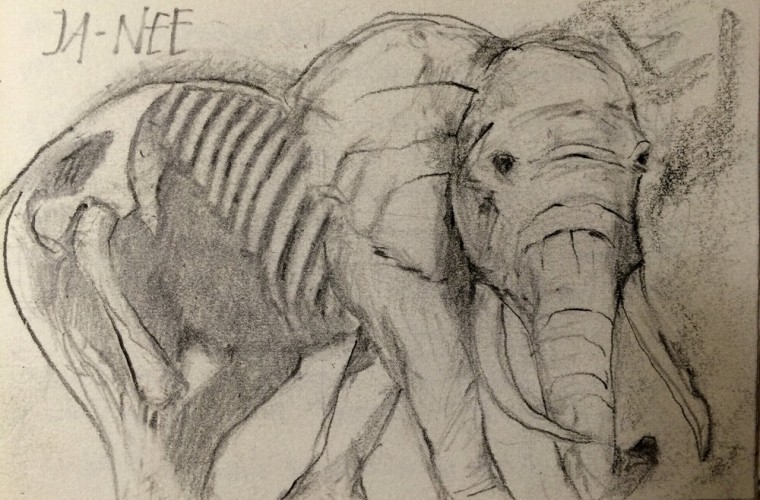 Pages from the Book of Animals

“Tigers are the polar bears of India,” a man said to me.

We were in India when he said it. I said Hunt’s tiger—meaning the one with a notoriously short fuse that ate British birder David Hunt, February, 1985—ended up in the zoo at Kanpur, and Hunt’s body, once it was recovered by the forest rangers, was taken by train to Delhi and burned.

“Tiger show over,” the guide said. “Tiger show gone finish. Chalo—” He meant it is done, over, let’s go. I knew that word: George Orwell had used it in Burma, at a hanging. Words are old, dirty. Facts in contrast are a kind of navy blazer you can take anywhere—a party at the Ambassador’s, the reception for the poet, business class at the airport. A tiger has one less tail vertebra than a lion, but two more teeth.

In India, eunuchs sing at weddings—

did I read that or did I see it happen? A dream of falling feels the same as falling, at the time. In India I rode the red kayak of experience through the rapids of exuberance and threw up in a ditch. On the train, passing through first class, I heard the American woman say to her friend, about the swarm of children begging on the platform, “The smallest are cutest,

There is an endemic Indian gazelle called in Hindi chinkara, though Vishnoi hunters call the gazelles cheenk, after the sound of their alarm calls. It means “sneeze.” Hey look, three sneezes just crossed the road. I like this mutton, it tastes just like sneeze. The Moghul kings of India coursed gazelles with cheetahs but the last wild cheetah died in 1967. I was alive then. It was not so long ago, when the end of nature was starting finally

to become the end of nature.

At the kill, the dead sambar looked like a deer shipwreck: dangling neck, antlers a mess of shattered sticks. We had left the jeep to go on elephants. The tiger had eaten the intestines of the dead first, leaving a bowl full of flies. In death will I look like that? I just want to die with my hands folded on my chest like a stone king

in a church in France. It can be an animal,

just let it be a tidy animal. Who will be the final person killed by a bear, a feral boar, trail-coiled cobras? After that, the rest who die will be shot by policemen or angry husbands. Death by nature will be a story for children, just so much more long ago and far away. In a lecture, Peter Zumthor said once that when you think about it, landscape without architecture is, you know, a bit ugly.

The problem is that most things are a bit ugly,

including human beings and most architecture. The students who get a D in architecture class must as punishment design airports. Tell me what to do or say in order to be upgraded into Premium Economy Plus, drinking Diet Coke all the way to New Delhi. Outside the window, the mountains of Iran looked like a kind of heaven. Addictive as smack, experience: say when when you’ve had enough. Zumthor meant empty I think:

some people but no houses, no stone barns, temples only in our minds.

That would be empty land and when we feel empty, we fill silence with beaters and clappers. In India, what if white people did the dishes, mowed the lawn at Agra? Would the Chinese want their parts too? Don’t kill the last of the tigers, here, take this—we call it Viagra, it’s powerful voodoo. Too bad tigers can’t shed their skins like snakes—

I wrote that in my journal, right below something by Emerson,

a lover of the East who often annoyed Thoreau by borrowing his ideas and his folding telescope. Thoreau paid for telescopes by making maps, collecting more and more pond turtles for Spencer Baird, making ever more pencils. Left two thousand pages of journals. We are creatures of expanding scale: nobody ever says to Peter Zumthor,

Tear it all down so we can replace it with something smaller, more modest,

and if the poachers take the final tiger, that still leaves leopards and stray dogs. They will be glad, one supposes: all loss is somebody’s victory. The knife will work between skin and muscle, prying the tiger’s hide free like pulling up carpet tacked too firmly to runners. Another American woman on the train: “Well, the sun causes cancer, and you don’t hear it going around apologizing.” Or maybe they will be caught, the poachers, caught and tortured and made to drink the same radiator fluid

they use to poison water holes.

We want justice, so long as it happens behind padlocked doors. When the last tigers are shot or go cross-eyed from in-breeding or are hit by trains trying to dash from one scrubby bit of forest to another, we will be sad, or we will think we are sad, and we will have a competition for who will design the monument, and it may in fact be a very good piece art, interesting and sensitive and made from recycled materials—as a tribe, we are not bad at making art—though as a poet said, it is not being shot by the bullets any of us should fear, but the gaps they open up in us

and the rush of clarity afterwards.

I happened across Charles Hood at an event in a tiny bookstore (Passages) in Portland, OR for Michael Light, a photographer who collaborated with biologist and writer, William L. Fox, and Charles Hood both of whom provided essays as text for a book of aerial photographs working as art (Lake Lahontan | Lake Bonneville).

What a find! I have since been seeking out his books and coming across interviews and published works on the internet. I won him over to submit to Triggerfish, I suspect, when he discovered our mutual admiration for J. A. Baker (quoted in Issue #23 at length), whose prose writing we both find inexplicably good. Hood has given up trying to teach Baker in his writing classes at Antelope Valley Community College.

But on to this poem—I love the way Hood so casually involves us in the inevitability of global warming/environmental catastrophe/6th extinction debacle as a foregone conclusion, as if all the damage were already done, to the point it isn’t even controversial or political anymore. I think he achieves this by being quietly brilliant—first of all through extensive world travel, broad reading and personal experience, and attention to what he sees and hears along the way, but in addition here and there is this visible iceberg tip of encyclopedic knowledge of history and a naturalist’s attention to biological detail which suggests he knows vastly more below the surface, and lastly he has a poet’s ability with rhetoric, analogy, juxtaposition and metaphor. I also have to say I admire the technique of using a longish prose poem but with the careful use of structure to hybridize this through use of 3-5 line paragraphs alternating with a single line regularly and careful and meaningful line break and use of enjambment. He demonstrates the best of both structural/formal strategies.

He launches quoting a man saying, “Tigers are the polar bears of India,” later offering arcane details regarding the distinction between tiger’s and lion’s anatomy, and again casually states by slipping in this general but ominous declaration, “It was not so long ago, when the end of nature was starting finally/ to become the end of nature,” and reinforces it by meditating concretely on the last person (in the not very distant future mind you) to be mauled by a bear, and considering that we will no longer need to fear being taken down ever again by large predators, even in the context of a zoo, because they will simply be gone, a dream, like the picture of a dinosaur in books, “a story for children.” While he may be ignoring natural disaster when referring to ‘death by nature’ this is probably on purpose, so he can drop the wry bomb to suggest that as long as human kind will be here, violent, gory deaths will remain prevalent (by the hands of policemen and husbands). Still, there’s no sentimentality or whinging or hand-wringing about any of this. Hood is at least half or more a scientist, and rational (and journalistic), before he’s a poet, which makes him all the more effective at his job as a poet. Via stream of consciousness we slide from the death of nature to a commentary on beauty and ugliness of nature versus culture, issues of social injustice, a leap to anecdotes dropped about Thoreau by proximity of referencing his own journal entry quoting Emerson.

Don’t let the humor and wit of this piece fool you—this is very serious, darkly sad stuff here indeed (knife working between skin and muscle) reminiscent of the satire of Swift or a prophetic parable of Jesus which disarms you long enough to punch you between the eyes. For those who have ears to hear…then

the rush of clarity afterwards.

The problem for us here is that rather than prophecy Hood’s strategic implication is that this parable is more like journalism from the standpoint of resignation and describing as if after the fact what hasn’t quite happened but is all but inevitable. I get the sense he is probably one in a position to know. It hurts to hear the news, but the writing’s so well done I can still take pleasure in how skillfully I’ve been flayed and gutted.