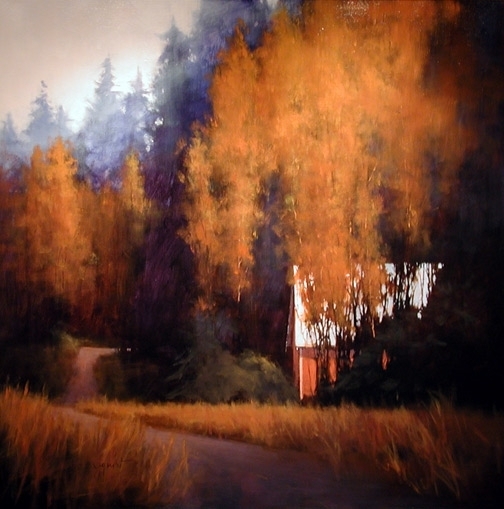 There is no station, only a parking lot
next to an underused laundromat,
where two men sit idly smoking,
waiting for their clothes to dry.
As the bus leaves her behind,
she tightens her grip on the suitcase,
which she had stolen in El Paso,
trying to appear like someone
who would carry a suitcase full of clothes,
someone also who has many friends,
even in this strange, angry, and dust-blown town.
She has seen it happen—
faces bright with fake surprise
rushing into each other’s arms—
because that’s what people do.
The movies make this much clear.
In reality, it’s hard to imagine
how little anyone cares
whether she has a reason to delay,
before she strides into the unforgiving air,
stranded in the seething daylight,
making a show of checking her watch
and a practiced pout of annoyance,
as if her problem were someone else’s tardiness,
and not this platform out to nowhere.

Even after one reading of Prisoners of Love, I know this woman at the heart of the poem. In fact, I feel certain that I know her name, even though it’s not mentioned. This is due to how clearly the poet describes her situation and pulls the reader in hard.

Alan Shapiro has said that all writing, including poetry “has to be first and foremost a story, a memorable story… it has to be a story in order to be memorable.”

Keith Dunlap tells a strong story in very short order. The brevity of the poem matches perfectly its subject and setting. The details, like the absence of a bus station, the parking lot and laundromat where two men sit smoking, the way she checks her watch, are brushstrokes in just the right places to fill out the scenery. The only name mentioned in the poem is El Paso, which means the place of passing – another well placed detail.

Using third person point of view, the poem mirrors the distance and separateness the character experiences. This life she doesn’t have, she’s observed, as we now observe her. Dunlap zooms in close to show us how she is trying to pass as someone who would have a suitcase full of clothes, a life full of friends, and “as if her problems were someone else’s tardiness”. Boom. The story ends and we have traveled to this character’s world. And we want her to make it. For me, that’s what good storytelling is all about.

I would like to comment on Keith Dunlap’s poetry. In particular the two poems “The Rip Tide” and “Prisoners of Love” for these are impressive efforts to say the least. I always marvel when I read a well-crafted poem. A confident voice and sure description in a poem are massive challenges. Not overstating the message is also one of the most difficult tasks a poet faces. Then you want to add a lyrical quality to the action and just a small amount of mystery to the subject. I am very happy to say Keith has accomplished all these things in his poems. I will give examples. Consider the total package in the following lines from “The Rip tide”: “I am neither young nor old” “as I stand against the wind” “where the titanic currents jostle” “briny sinews corded together” “like a furious hand clawing at the sand” “where the waves that will break upon the strand are mounting” “until I lose sight of the land”  Then in “Prisoners of Love” we are treated to the beauty of the following lines: “There is no station, only a parking lot/next to an underused laundromat/where two men sit idly smoking” “She has seen it happen/faces bright with fake surprise” “how little anyone cares/whether she has a reason to delay” “stranded in the seething daylight” “as if her problem were someone else’s…” I cannot offer too much praise to Keith for the outstanding use of language and theme to draw a precise and moving human situation. Further, Keith easily demonstrates the art of combining language and theme in a powerful, tightly controlled vehicle. My earnest congratulations to Mr. Dunlap for giving us all a truly accomplished trio of poems. Well done and well done.