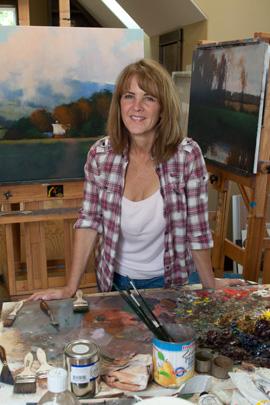 TCR/DM: In your ‘about the artist’ portion of your website there’s a provocative, surprising statement: “Romona likes to trick the eye, using muted colors and blurred contours painted as softly as a whisper. But in reality her canvasses are a war zone and her weapons of choice-sand paper, ends of brushes, rags and anything unconventional she can employ in battle.”  The jazz innovator and genius Thelonious Monk sometimes used his elbows to play his piano, stating that that was the only way he could achieve a certain sound.  Why are your paintings a war zone, and why the need for rough stuff in making them–would you care to elaborate a little bit on that?

RY: I like to attack a blank canvas with tonal washes and deconstruct from there.  And then when adding paint it will get to a point to where it just looks like a painting. Boring….so sneak up and cause unrest…by scraping off paint with my pallet knife. If it starts to become interesting I continue by wiping out areas, drawing with the end of my brush or generally anything that isn’t conventional ( kind of like how Thelonious Monk uses his elbows.)
So I continue on down the battlefield, I may win but I might lose (my closet is filled with casualties).  I think this painting is a good example: 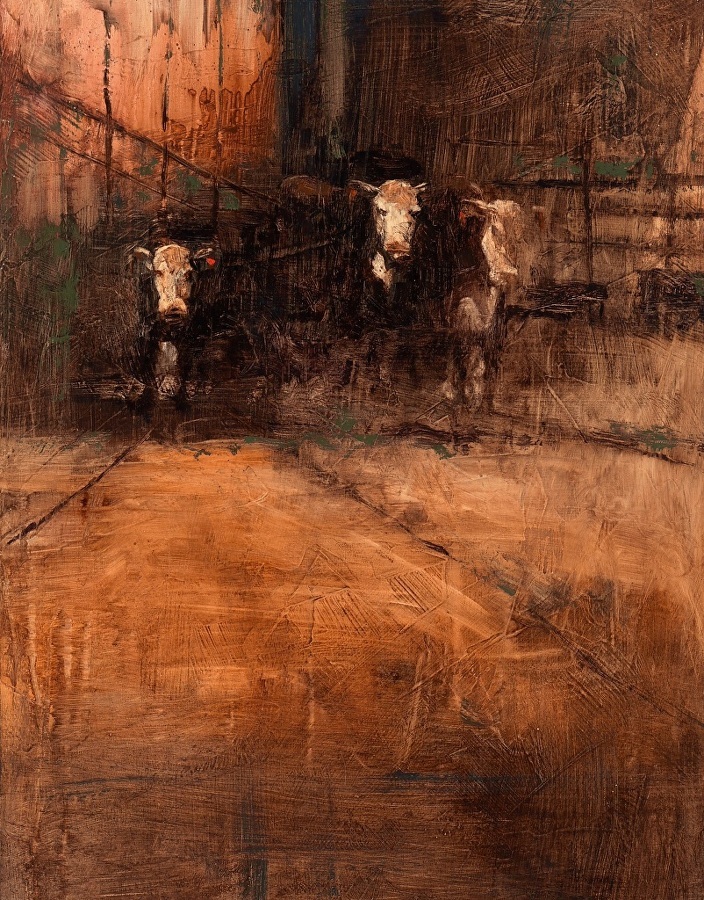 TCR/DM: You also say in your bio that you knew from the time you were four that your calling was to paint. There are a couple of directions of inquiry we could go from a statement like that, one about calling especially from an early age which implies a single-mindedness, passion and gifting/talent. The other is how one discerns and carves out a career as a painter and a creator of fine art.  First can you tell us what it looks like to know you are a painter and an artist at the age of four and some of the stages along the way that confirmed or denied this sense of calling and identity?

RY: It’s kind of neither of these but also both. But more trying to communicate how I see and feel the landscape around me. Even from a young age I became frustrated with people because they didn’t appreciate the beauty and interesting Things I saw. The interesting part is that I didn’t have access to fine art. But I loved to draw and eventually figured out that if I learned to paint well enough maybe I could communicate what I was seeing. But I learned it wasn’t only what I was seeing but also conveying the feeling and sense of place. Such a great challenge I have in front of me…
Hope this makes sense??????

TCR/DM: Are there other painters who have been models for you along the way toward maturity as an artist in translating this feel and mood of a landscape, when obviously you’re going beyond mere representation of a landscape into a realm that transfigures what we might see or even you might ‘see’ and adds other dimensions to the picture?

RY: The first painting I saw that made me think, “This is the direction of the vision I see. Oregon landscape painter Michael Gibbons.  He’s one of the first “plein air” painters in this area before the term was heard of.  Learning how to paint “plein air” was a huge step in translating what I was seeing onto canvas. With the basics, I spent years using mother nature’s lessons of “seeing” nature.

TCR/DM: It seems like place and the local landscape (in and around Yamhill County/Oregon Wine Country) are of primary importance to you. Since this is the subject matter and your muse as an artist, I can’t imagine you working in any other location, say Phoenix or downtown Chicago? Any guesses as to what kind of artist you’d be or subject matter you might work in if you grew up or lived anywhere else?

RY: I can find beauty in the most surprising places. It’s mostly about the light but I have to say, “my passion is where I am right now in our beautiful spot on earth”. It would be much harder to have my ” vision” in a place that doesn’t excite me visually. 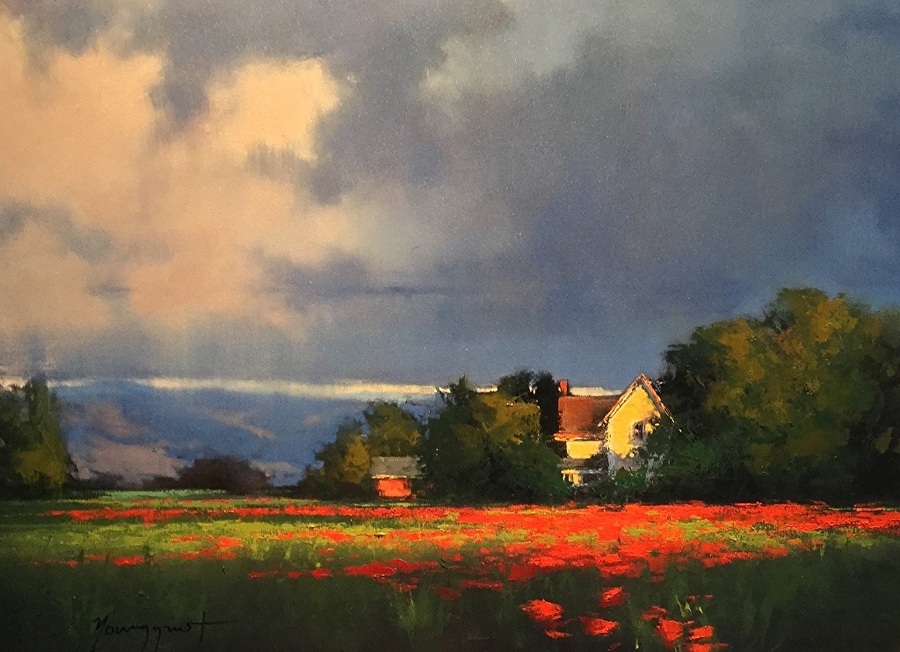 TCR/DM: And, any guesses why you think the local landscape resonates with you so much?

RY: Because every day here is the most beautiful place on earth to me,,,,even in the raining.

TCR/DM: Another local painter, Gary Buhler, who also works primarily in landscape, when interviewed by Triggerfish says recently he has begun painting buildings in Portland and sees this as a move toward something more human. He still doesn’t paint figures, but finds it a step closer toward something social to depict human architecture and city-scape. Houses and country homes or farms find their way into your work, and obsessions are a funny thing, but do you ever see yourself branching out in some different way? 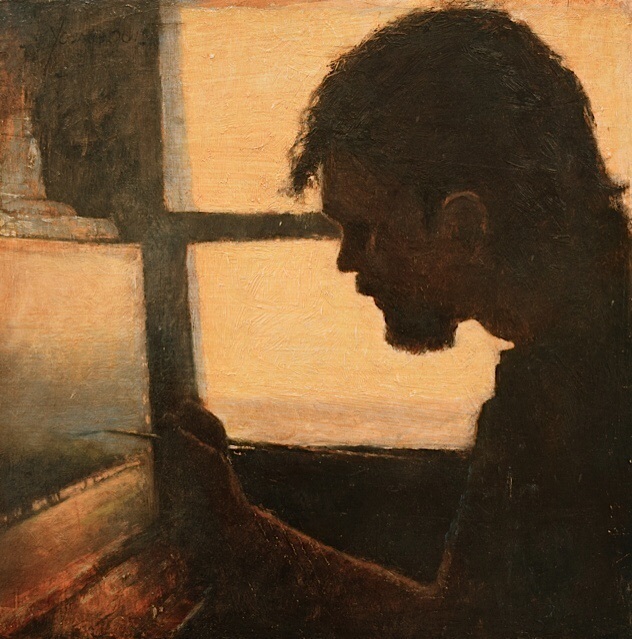 RY: I have no desire to bring humans into my landscapes  as I’m a extroverted introvert. But I do strive to bring more minimalism to my work. I would like to see a more powerful message of peacefulness in my work and I think the path is a simpler, more abstract design.

TCR/DM: Can you describe the process you undergo a bit. I find it personally fascinating that it’s possible even from an early age, that you view a landscape differently than most other people. How do you see? How do you translate or transfigure something ordinary into a luminous, moody, emotive impression? Do you use photographs as an aid? What goes into translating what is seen into an impression by painterly means? 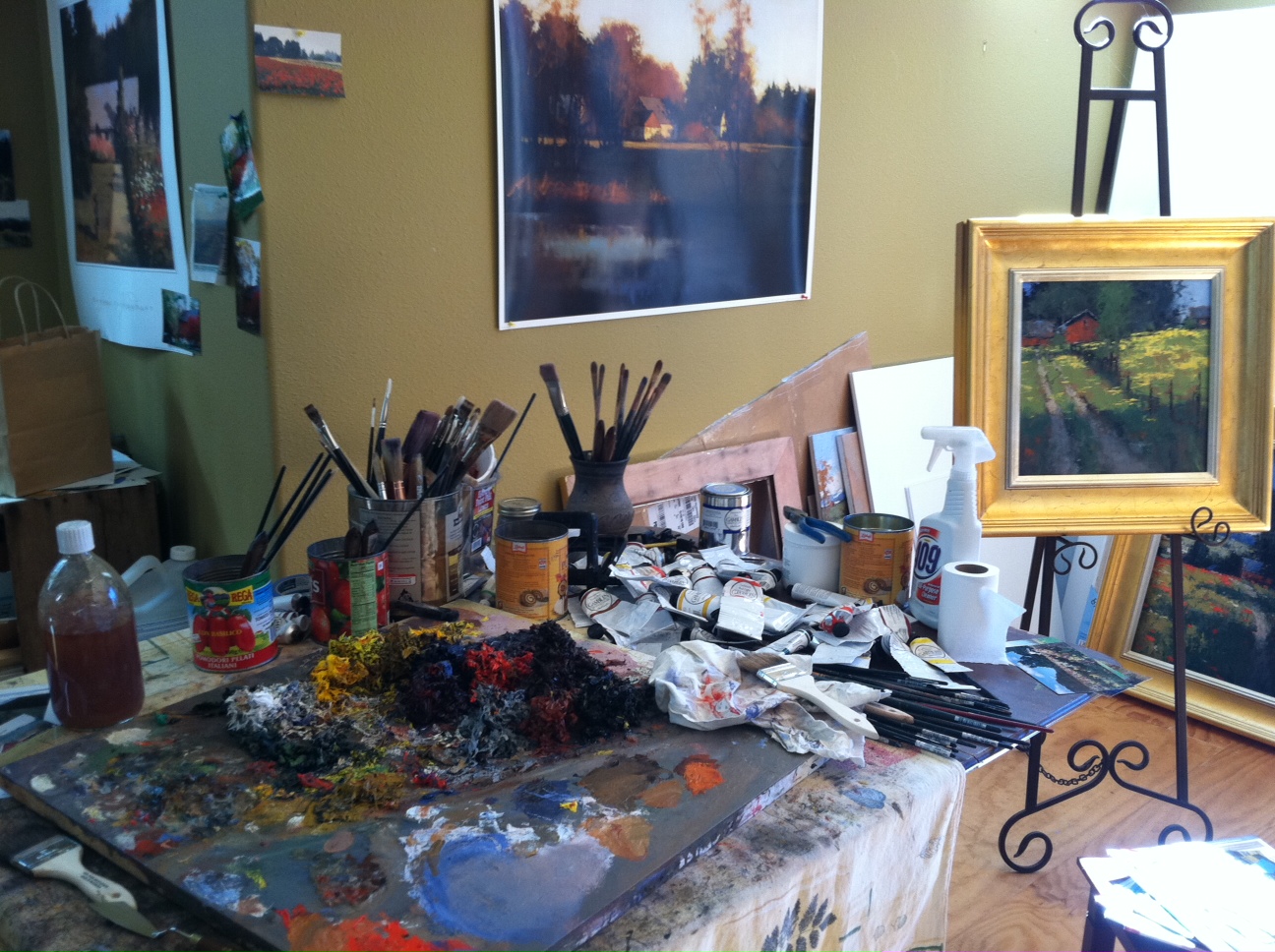 RY: The possibility of a painting always starts with a gut feeling. When I approach a scene and get that gut feeling ( it might sound goofy but it’s close to the feeling of when you first start to fall in love). Then I know I have to court the scene and seek a full relationship. And honestly, it is like navigating a relationship with lots of trial and error. So much of the time I have no idea what I’m doing and it’s very intuitive. I do believe something other earthly does guide me. So many of these relationships don’t turn out and I have to break up with a painting and move on haha.

TCR/DM: Plein air ever or studio only?

RY: Both! But this summer I’m trying to get outside and paint more to get fresh eyes. 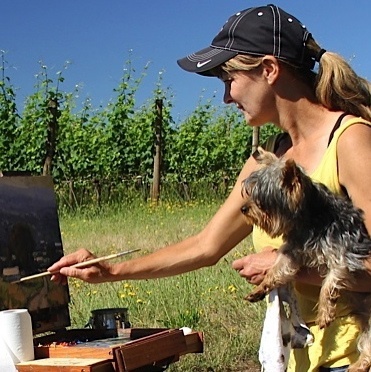 TCR/DM: There’s a question that I would like to ask that’s a struggle to articulate, and of course if it’s hard for me to ask you it will be hard for you to answer, but you reference it in your answer above about taking a painting to a place that is beyond ‘looking like a painting.’ I’d like to ask you to try to describe what that quality is that takes you and your audience beyond the merely representational to something that transcends and becomes art–something that becomes universally receivable from the particulars you are capturing.  It could be done with writing or with painting, and when we see it we recognize it, and it involves skill and technique, but it mainly has to do I think with a vision the artist has and conveys to the audience than mere technique.  There’s a fiction writer/memoirist, Karl Ove Knausgaard, who tries to capture and describe this quality in his massive work, My Struggle, Book 1.  He is in a train and passes an industrial area in sunlight and mist and experiences a feeling similar to the one he gets when viewing certain great works of art:

What I experienced seemed to me to be of enormous significance.  Enormous significance. When the moment had passed the feeling of significance did not diminish, but all of a sudden it became hard to place: exactly what was significant? And why?  A train, industrial area, sun,  I recognized the feeling, it was akin to one some works of art evoke in me.  Rembrandt’s portrait of himself as an old man in London’s National Gallery was such a picture, Turner’s picture of the sunset over the sea off a port of antiquity at the same museum, Caravaggio’s picture of Christ in Gethsemane…the experience did not favor any particular epoch, nor any particular painter, since it could apply to a single work by a painter and leave everything else the painter did to one side.  Nor did it have anything to do with what is usually termed quality; I could stand unmoved in front of fifteen paintings by Monet, and feel the warmth spread through my body in front of a Finnish impressionist of whom few outside Finland had heard.

I didn’t know what it was about these pictures that made such a great impression on me.  However, it was striking that they were all painted before the 1900’s, within the artistic paradigm that always retained some reference to visible reality.  Thus, there was always a certain objectivity to them, by which I mean a distance between reality and the portrayal of reality, and it was doubtless in this interlying space where it “happened,” where it appeared, whatever it was I saw, when the world seemed to step forward from the world.  When you didn’t just see the incomprehensible in it but came very close to it.  Something that didn’t speak, and that no words could grasp, consequently forever out of our reach, yet within it, for not only did it surround us, we were ourselves part of it, we were ourselves of it. (pages 222-223)

We all know what Knausgaard is trying to describe here, and I think he does as good a job as I’ve heard anyone attempt on pinpointing the quality that Art has of moving us.  C.S Lewis also, in Surprised by Joy, attempts this–it has to do with a spiritual perception, and the sublime/transcendent.

How would you respond to this, and in regard to your work how does the landscape itself, which is one thing, that we all see, become transformed through the process of painting it become a new thing–the landscape as you see it?  I sense asking a question like this is not very nice or fair to do since the complexity of how you translate vision to the canvas probably must be largely intuitive or inexpressible, but give it your best shot.

RY: It’s the challenge to make a person stop what they are doing and appreciate the landscape. I haven’t diverted from this path since I was little. Standing in the middle of the road in rural Oklahoma and seeing the beauty of a stormy sky behind a grove of mulberry trees. I tried so hard to make my family see what I was seeing and appreciate it with me. And I’m sure they did in their own way. But no one really cared. It seemed so sad to me. I had to figure out a way to get their attention which is basically what I’m doing to this day. Skill and craftsmanship will come in time but vision, desire, tenacity is something that can never be taught in art school. I really believe I was an Indigo Child because I am so single minded. Or even a savant…..( perhaps even the idiot part). I do know it’s a calling, it’s who I am and I constantly strive to perfect my message. ( by studying nature). I just hope my paintings bring that gut feeling of falling in love when people look at my work. I hope people get to escape into a time gone by and find peace and beauty in the landscape around them. 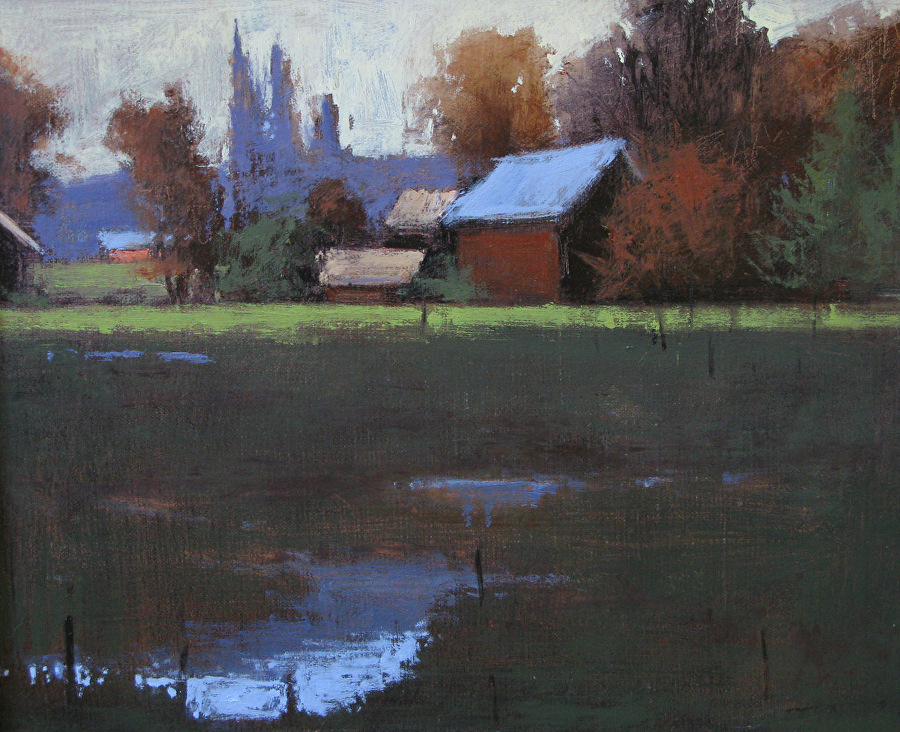