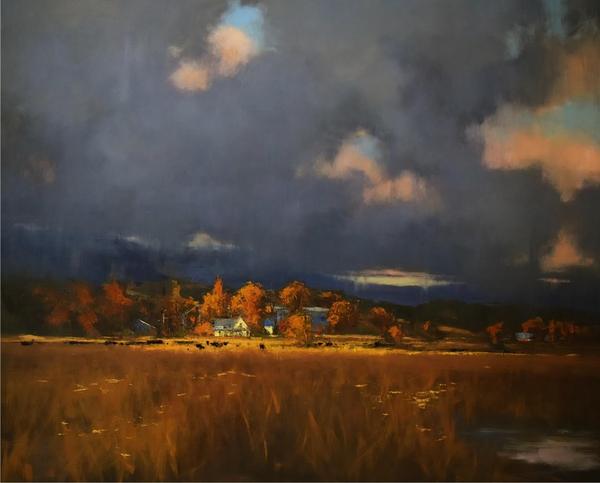 Revive in me the need to run,
Take to the road in a high wind
And listen as stories intimates told
Build like grain in a bin;

The first and worst are of death of course,
The next and dearest sweetest
Are of love and loss of love,
For nature never treats us

As we wish and shame and wanderlust
Invite a story’s end
As death revives the urge to live,
To turn about that trend;

Outside my pickup window, trees bend
At the waist, shed cells of red
As climbing buntings, clipped by a wind,
Skid sideways like flung dread.

And I am a singer in the night,
A dying note not quite dead,
A channel of chattel blowing free,
My microphone my head.

*Note: This poem first appeared in Plainsong, and then was reprinted in Larry Woiwode’s chapbook, Land of Sunlit Ice, published by NDSU Press in 2016.

The nature of song in poetry has been somewhat displaced since the formal elements of verse lost their primacy in recent poetic praxis. It was not inevitable that much so-called ‘free-verse’ should come to resemble talk more than poem; yet that does seem to be what has transpired—for better or worse, depending on your chosen stance in relation to the ever-shifting dogmas that from a great distance dot the poetic landscape. Personally I hear so much talk-talk-talk all about me, day-in, day-out, that I long for a bit of song when I crack open a sheaf of poems. And though song-on-the-page is different than song-in-the-ear (where music and melody contribute the animating spirit of the words), still the ‘sung song’ and the ‘written song’ tend to share those formal elements of rhyme and meter that serve as an invitation to leave the quotidian clatter of chatter behind one and enter, through a more talismanic language, a more magical place.

To be frank, these devices can often be used quite crudely in the sung song. Song lyrics on the page often fall flat without melody & instrumentation to accompany them. Song on the page demands more subtlety, and Larry Woiwode’s Mid-Fall Song provides just that: “closing rhyme’s gate”, not with a harsh and hurried clang, but with a gentle and thoughtful click. Right from the get-go, in the title, that calm measured approach is in evidence, for mid-fall song needs to be read in two ways: seasonally, of course, but also as a song-that-is-sung-while-falling, a falling song, a song to fall to, a song to fall with.

The poem that follows is all movement, orchestrated movement. We know we are falling, for that is given to us from the start, but that act of giving ourselves (through song) to the fall, (and its seasonal namesake, the Fall) revives in us “the need to run”. Inevitably, that landscape through which we would run as we “take to the road in a high wind” is a landscape where, bowing to the season, all things are trending downward, are falling: a landscape where “trees bend” and “shed cells of red,” where birds “clipped by a wind / Skid sideways, like flung dread.” And, paradoxically, there is at the same time a rising —“As death revives the urge to live,”and as the stories that have fallen continually through one singer to the next “build like grain in a bin.”

For me the essence of all song is that ability to contain such contradictory movements. This is what music does best, conjuring as it does many e-motions at once. It is the soul that music thus addresses, the soul which surrenders to the moment whole; rather than the intellect, which divides and separates in order to apprehend. Language itself is too often shackled to intellect, and yet it has a ‘music’ in it as well, one that can be heard soundlessly. As complex as the emotion here remains—fulfilling its nature as a song, the poem is simple enough to hum, to vibrate in the head, to tattoo on the heart, to contain everything by allowing everything to fall with it through the mystery of tuned language. At this point in my own fall, this is precisely the sort of poem I find myself returning to again and again. Oh, I can talk up a storm as robustly as the next poet, but more and more I find it crucial to abandon speech for song—to become…

…a singer in the night,
A dying note not quite dead,
A channel of chattel blowing free,
My microphone my head.