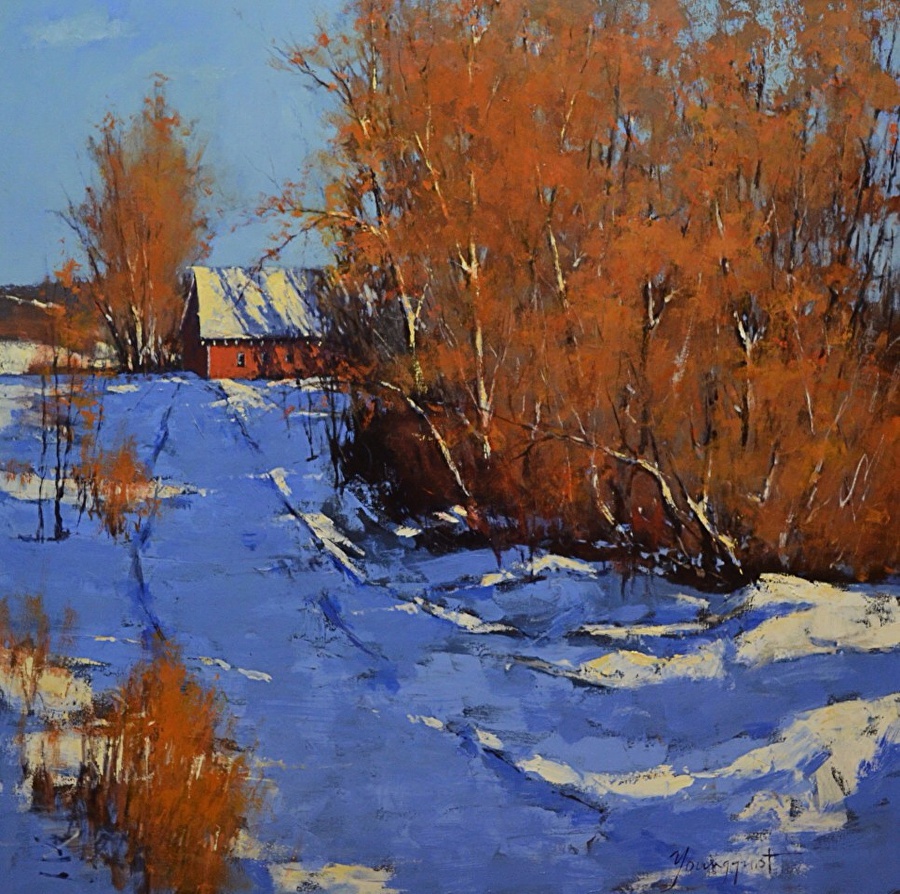 After a Night of Snow

The day returned
on a small wind,
the sun a stone outshone
by the sky’s sapphire.

The empty hands
of apple trees clutch
at the rufous glow
of their fruit,

through the stillness
of these rooms,
memory and desire
effaced like shadows

in the afterlife
of a priestly white,
and all the landscape
blanched beneath

the echoing light, save—
poised and bobbing
upon a branch—
a bluejay the color

of the flame that glints
beneath this quiet kettle.

Wallace Stevens once remarked on the difference between what Williams was up to and he himself. He would come into contact with the same reality as Williams’ but he would add to the “spareness” a summum bonum. I mention that because Casey’s “After a Night of Snow” seems a blend between Williams’ “spareness” and Stevens’ summum bonum.

The point is simple enough: “After a Night of Snow” shares a Zen-like spirit with Williams and Stevens. The apple trees that once clutched “the rufous glow / of their fruit” are now “fallen and doused “under drifts.” But the snow is not a mere fuzzy blanket. What consolation comes from the force of the imagination which is less the clairvoyant eye of, say, Emerson, and more the modern poet who confronts the nothing that is.

This is a fine poem confronting a reality difficult to catch. Neither is it mere romanticism. My sense is that it’s in the tradition of poets seeking some harmonious center without confounding a reader with lexical complexities.

There is always a tension in descriptive poetry between simply saying ‘what is there’, and projecting enough onto ‘what is there’ to fathom what inspired the act of observation to begin with. Say too little and a reader may as well just look at the world on their own, without the intermediary of the writer. Say too much and the writer may block that world from view entirely. Imagism may have been a welcome antidote to the egocentric prolixity of the Romantics; yet as the poetic seasons take their successive turns, bald realism has exerted its own tyranny on the poetic eye—with a result that is too often now a symptom of the journalistic materialism of our post-modern age with its appetite for empty detail.

Here is a poem which seems to balance effortlessly on that poetic high-wire between the objective and the subjective. This snowy landscape, observed in minute detail, is so utterly external that it distances even our own “memory and desire,” its white palette effacing them like the shadows they are. And yet, closing with a single startlingly beautiful brushstroke of color, the poem calls us home, home to the hearth it springs from…

poised and bobbing
upon a branch –
a bluejay the color

of the flame that glints
beneath this quiet kettle.

…home to the blue fire beneath the poet’s kettle, which I see quietly reflected in the poet’s eye. Nowhere has the integrity of the landscape been imposed upon by this poet; there are no tracks of trespass in the snow here; and the bluejay is still a bluejay. Yet the active heat in the eye of the poet has sought and found its refuge in ‘what is there’—and in so doing has transformed it. I must confess I gasped at that final image, at how calmly it commanded my eye to see ‘what is there’ and ‘what isn’t there’ in the same instant.