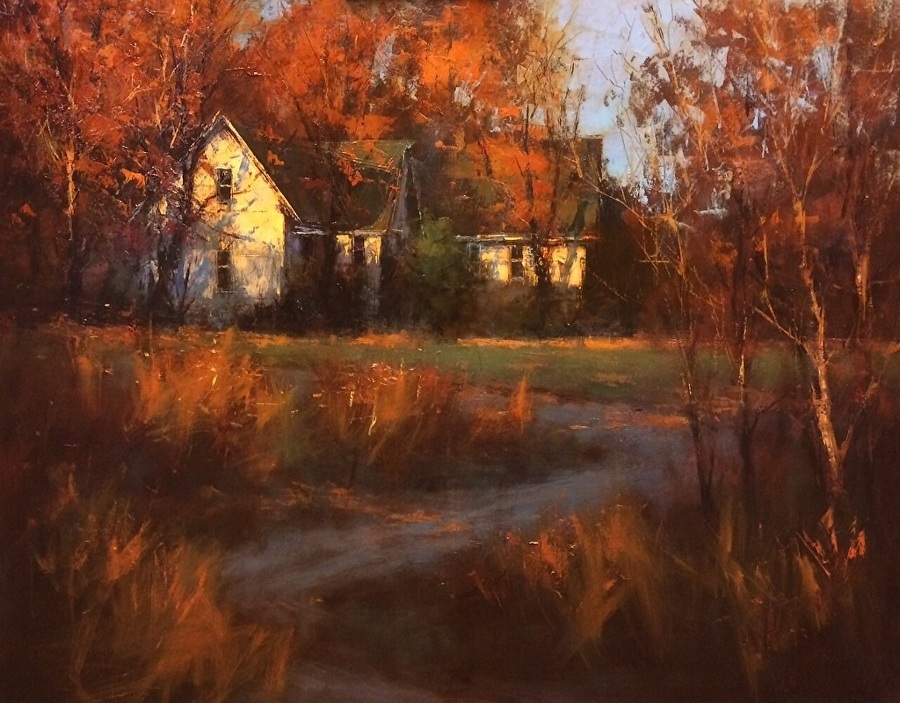 coffee is good this morning
rained hard for two days now
just starting to let up
wind is getting up
it will get colder
every season has a day
when it folds into the next
today is that day
most of the leaves fallen
squirrels in panic mode, gathering
birds five deep at feeders
smell of snow not quite in the air
ponds and lakes will soon freeze
thanksgiving five days away
now timber scent is heavy
the very earth gives off
inherent primordial pheromones
reminder of our origin, our future
somehow peaceful feeling
of unknown anticipation
with no real fear

As the title suggests, this is a poem about absences, about what’s missing and what’s not stated. We’re eased into this poem slowly and cautiously: (“coffee is good this morning”), followed by a quick weather update, all in short, terse lines without punctuation. At this point, the style and content suggest a speaker who’s working toward gradually exposing some sort of internal conflict, and who’s perhaps easing himself into his own environment.

In this way, the poem is reminiscent of Hemingway’s Big Two-Hearted River sequence, which also presents simple descriptions of basic actions and conditions using brief, unadorned language: “Nick drank the coffee…”; “The coffee was bitter. Nick laughed.” Hemingway uses this type of language to show a speaker who is attempting to take things slowly and carefully in order to tamp down an inner turmoil we’re never allowed to fully see or understand. By this poem’s conclusion, the impact on the reader is similar.

In line five, the speaker brings up the notion of transitions, of movement from one stage, one season to the next. With the introduction of squirrels and bird feeders, we’re also in a setting of in-betweens that straddles the natural and domestic worlds. The poem’s final section provides us with its central contradiction, related to these transitions, hinging on the word “pheromones,” a word that suggests — not only transitions — but procreation. Visually and even in terms of smells, the earth itself is communicating the type of positive future, the sense of newness and becoming, usually associated with the spring, not fall.  So, even though this is a time of death and decay, the speaker perceives this transition as peaceful and pleasant.

This perception provides us with a final reinforcement of the tension between these short, understated lines, and what goes unsaid: the speaker, in noting the contradiction between his peaceful mindset and the changing of the seasons, refers to this feeling of peace as “somehow,” as if he’s surprised.

The poem’s conclusion takes us back to its title, and leaves the reader wondering (in a way that’s not unsatisfying) about a hand-shy speaker who’s expecting anxiety from his astute perceptions of his environment, fears “real” or imagined, but who tentatively comes to the conclusion, like Hemingway’s Nick Adams, that maybe things will somehow be ok.