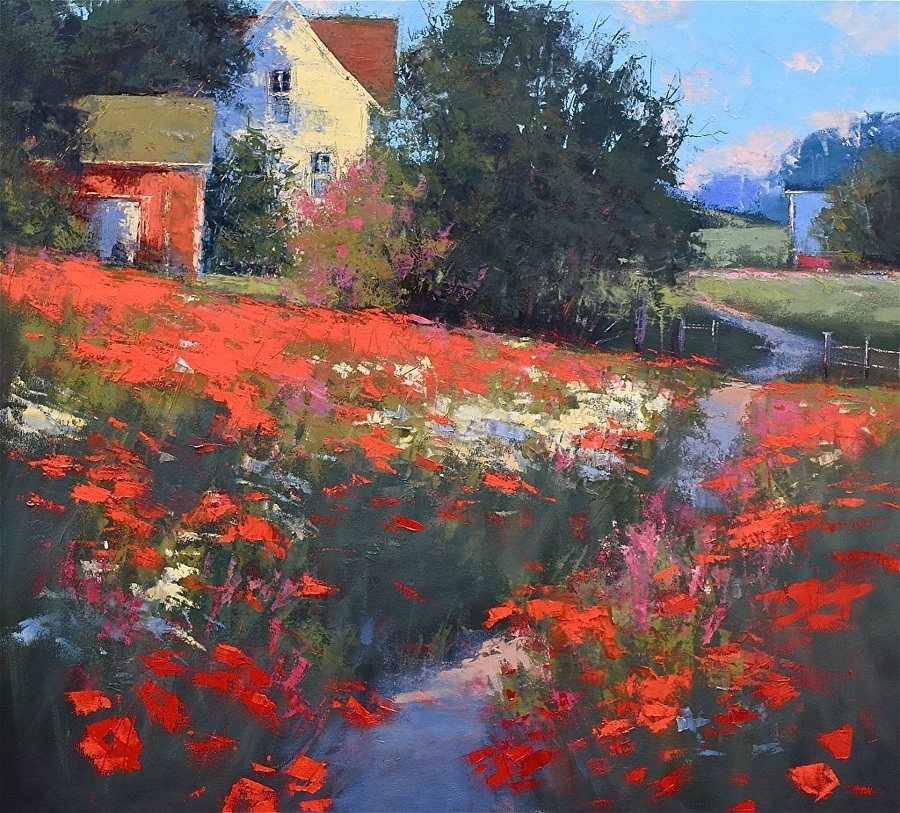 Horses sleep in the wind driven snow northwest
out of Fargo. Flocks of buntings come down in
swirls of flakes into fields of stalks. Night
appears an hour ahead this early March. Thick
flakes darken and slow. Slush forms on the horses’
backs. They shudder it free, steam, are cold once
more, stamp, let it build up. No colors now show.
Great heads droop toward drifts climbing up dark
hocks as silence ferries in its crystalline blow:

Out of Fargo, apart from you across a curve of
continent this season, seeing snow fall over
these of all the sleeping horses here between.

*Note: This poem first appeared in Harpers, and then was reprinted in Larry Woiwode’s chapbook, Land of Sunlit Ice, published by NDSU Press in 2016.

1.
Lineation is too often a tool that is ignored by contemporary poets, or treated with a certain flippancy. I am always surprised, when hearing poets read their own work aloud, at how they tend to gloss over line breaks they themselves have enshrined on paper—running lines together breathlessly, or breaking them a word or two before or after that break actually occurs on the page. Given the fact that lineation is sometimes the only thing left that distinguishes a piece of verse from a piece of prose, this casual approach to its usage seems unfortunate. The integrity of the line itself, as a visual and musical unit, is undermined; its inevitability is called into question; and the space at the end of the line, that moment of blankness where the reader is left hanging in uncertainty, is undervalued. Though I greatly enjoy Kerouac’s prose, I confess I have a bit of a beef with the Beats whose legacy is too often reduced to a fetishizing of momentum at the expense of the clear delineation of that blank space that haunts the end of each line of verse, a space in which so much of a poem may unfold. In Larry Woiwode’s poem, Horses, that space, due to his masterful use of enjambment, speaks at times as loud as his words.

Enjambment is a dry and technical term, I suppose—one of those ‘three dollar words’ that may annoy anyone who is not an active student of poetry. But the experience of enjambment is made utterly sensual in this poem. One senses that almost every line has to reach across empty space in order complete itself, just as the voice in the poem is reaching out toward someone far in the distance. In form and content, it is this essential distance that is the landscape of the poem, it is this essential distance in which this snow falls, in which…

Slush forms on the horses’
backs. They shudder it free, steam, are cold once
more.

Between thick and flakes, between horses and their backs, between once and more—. It is in this essential distance that these horses sleep.

How often the horses of enjambment are impetuously harnessed to race a reader across that precious gap between lines. Not so, here. These line-breaks accomplish something that neither a comfortable full-stop, nor a galloped bridge can: they make that gap habitable by image, they let the snow drift to earth there, they let the horses drift to sleep there. Their syntactical interruptions do not jar, they are not impatient—. Rather, they attenuate—. Longing for completion, they stretch out into that distance they themselves create by reaching, reaching, reaching. The entire landscape here, the expanse “out of Fargo,” as well as the expanse of the printed page, is seasoned by absence. For absence, the poem assures us, is indeed a season.

2.
The “crystalline blow” of silence which hovers over the white space of the poem’s only stanza break is, textually speaking, delivered by the italicized triplet that closes the poem.

Out of Fargo, apart from you across a curve of
continent this season, seeing snow fall over
these of all the sleeping horses here between.

Most of all, for me, it is that remarkable final line which strikes the blow of silence in my soul, that line in which the sense of enjambment is not just linear, but seems to have crept into each individual word of which the line is comprised. At first reading, the line seems deliberately designed to make one stumble—but gently, for at the same time it seems designed to catch and cushion one’s fall into it.

these of all the sleeping horses here between

Subsequent readings transfer that feeling of falling from the reader to the words themselves, which seem to have landed in their positions much as the flakes of snow have landed in this landscape “out of Fargo,” settling into the line like “swirls of flakes into fields of stalks.” So-called “inversions” (of grammatical or expected word order) were once a common device in poetry, employed to elevate ordinary language—until over-use tipped them toward hollow cliche, and they lost poetic currency. But wait, something similar, if more authentic than mere archaic mannerism, is going on in the strangely stilted but stately progress of this line. The effect is one of both vast distance and of intimacy, as if there were a huge gap between each of these words, a huge gap that nevertheless unites each of them into the line. Each word feels swaddled in distance.

This is the conjuration of the word, the consolation of the image: though it can neither reach through infinite time, nor compass infinite distance; though its yearning be ceaseless, its beloved forever beyond; though its eye cannot hold “all” the sleeping horses—yet it can, in relation to that all which it is not, tenderly figure forth “these” horses—“here between” there and there—in the ache of one infinite moment for the next.