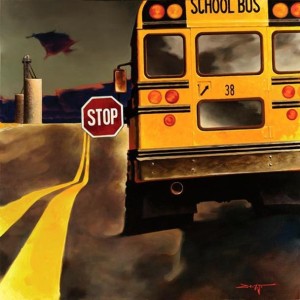 This Is How It Will Be

Other people had already set the table, so we wandered out to see about the yard. A plot of dandelions that puffed out their seeds. The day was still, so we began blowing on them and flapping our arms to create wind until we were dizzy. A man who had been standing like a tree said the dandelion blowers are over there and motioned to a field of kids, tall as corn, somberly blowing the fluff to the ground. He shook his head. Maybe you can do something about it – I am busy pretending to be this tree here, so when the rest of the world peers in from their living rooms, they won’t know we’ve killed all the bees. He snarled his barkpocked face into a knob. Child labor. It’s disgusting. No one said anything about wishes.

Where are we going I wanted to say, but the question came out like this: Going where we are, and the question mark caught in the space between my teeth, so we walked until we got back to where it all began.

What if our names aren’t on the list? You ask, nervous and itchy. I scrape my nails against your back to plot our location. Ah, right there, you say, (you are wrong, we are over here I say and move my finger lightly over your kidney) but really, what if our names are not on the list? We burned off our fingerprints long ago. No, they melted, I say. In the blizzard of 15? you ask, shaking off the rain. No, remember? in the fires of 20, I say. Our faces melt in the acid falling from the sky, but we are bone-close and I love the smile of your skeleton.

We click into the house finally, our soggy bones sticking from the humidity. Dinner is still being made. The children are drunk on dandelion wine (what did you think was going to happen, making them work all those hours and with only one song playing over and over again, the national fucking anthem says a youngish woman to an oldish man. They have no hope she says, propping a sloppy 7 year old up against a rubber plant which he wraps his arms around and says he loves). Can we help? We ask, opening and closing our fleshless hands to stretch our tendons.  (Will we scare the children? we ask, and then chatter our teeth in a thousand rough guffaws. They have seen worse you say, tenderly touching my cheekbone.)

I wear a phalanx of your smallest finger around my neckless spine. You have carved my new name into your rib right above your missing rib.

Now that we don’t have flesh, it is like the garden of Eden again. We are shameless and thin, and we can talk to animals through the teeth marks they leave on our femurs and clavicles. Also, you point out one day while we are sneaking into abandoned malls and trying on clothes like hangers, we can travel anywhere, and no one will know we are from where we are from. Where we are from slips through your teeth like oil.

The word feels like a coin with so much dirt stuck to it that it jams up the machine, when all you wanted was a rubber ball to bounce or stuffed animal to smooth, or a plastic gem-stoned ring to wear: something to pass the time, something to help you remember where you’ve been.

Where we have been we remember in shivers at night, while we rename the revised constellations. Orion has lost most of his belt, and the Pleiades are down to only five sisters. Little bear is gone, and Ursa’s low growl has become a bed for our bones, which are grinding down faster now that the oxygen is gone. The only thing that makes us sad is that the dandelion children never got to grow up. As for us, we lie in a pile of tangled parts and, when we are a pile of dust, we say excitedly as we fall asleep, we will REALLY be able to travel. Even beyond this world I say. And you nod in a sort of shimmering of particles against slants of light from the shadowy moon, whose long work is almost done.

My mother, not my mother mother, but the ideal her, who changes life through courage.  Attacking, attacking;  asking, answering.  Such Intimacy!