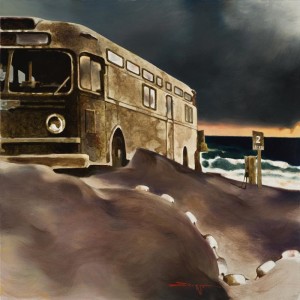 I’m not sure how long it took to realize it, but one day I noticed the gulls had stopped flying at the landfill. It wasn’t due to lameness though some limped, one-legged, or had empty gouges in their faces where eyes used to be. A few made threatening gestures by lifting their wings high above their backs, arched up like arms, taking on the aspect of fierce angels, hooked beaks like pointed daggers and the avian forward-looking eyes of raptors. Eventually I noticed a molting of feathers, but it wasn’t so much molting because they retained the spines or quills of their plumes only losing the soft material necessary for flight and lift and the skin underneath took on bizarre hues and color. I was witnessing some sort of metamorphosis but toward larva or pupae stage rather than butterfly. Maybe in this Oregon landfill I was being transported to prehistoric Liaoning Province to what would become so many millions of years later–(now)–part of the Yixian Formation and that ancient lakebed where even now they are digging up fossils of preflight birds, the sinosauropteryx. Bird skin without ‘feathers’ must be ugly, but the gulls were more scaly and reptilian and even the gimpy ones were capable of running more quickly than before—their legs were taking on muscle mass, perhaps compensating for being grounded. Still, unable to leave any longer, the mud found a way of reaching up to embrace them as long lost friends, or as if they always were of earth, dust, grounded, ground. “Sues points out, ‘It seems that, genetically, it’s not a great trick to make a scale into a filament.'”