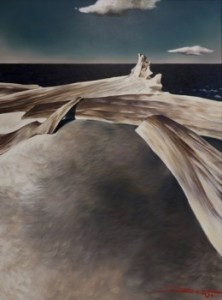 death of bowling and the various use of heads

Some objects become something other, a new thing, when jarred out of context and separated from the purpose for which they were created. On the MRF tipping floor a bowling ball becomes a thing of sadness and fear. They come in on Goodwill loads. Sadness, because their arrival in such large numbers signals the death of a sport, a previous generation’s pastime, the end of an era—now those men or their children sit in front of a flat screen watching the movement of light and images representing other people’s activity, drugged by illusions, alone and sedentary. Fear, because those polyurethane cannonballs can shoot toward someone lethally when wedged between a loader or backing truck tire and the floor. Once after the MRF first opened, an operator named Tim picked up a ball between the bucket and thumb of his excavator and pinched it at the operator on the other side of the building as if they could play catch—it rocketed over toward Robert, bounced off a wall, punching a hole in the sheeting, and dropped down on his machine’s counterweight, denting the cab deck as if hit by a single giant piece of hail. Any machine that has to grapple with them is at risk and they roll everywhere like marbles under bare feet.

Another issue is doll’s heads which invariably come apart from the body. You might think it would be easy to view them as mere hollow plastic, just the remnant of a toy, not real flesh and blood, not a decapitated baby or toddler.  Still, it’s disturbing, despite running through this calming rationale, whether because it’s an infant’s head or because it’s designed to look very lifelike isn’t clear or even the point. The point is it requires work to see them for what they are and not what they seem. They litter the landing which is a wide plateau at the top of the cell that houses the tipper and special waste dumping grounds. The heads get mixed in with the small chunks of concrete used as roadbase, and after rains they float to the top, so that on an early, dark morning it’s not a stretch to see a re-enacted wasteland of Cocytus, Dante’s icy plain covered in complaining human faces that must be stepped on to pass through. Here they lie dusty, muddy, skulls cracked open, faces dented by tires running over them, the delicate features of nursing newborns peaceful, or smiling, eyes lidded at rest or staring open. I have never heard an infant’s cry, but the silence, except for crunching tires seems off too.

I read somewhere that due to the quirks of physics or anatomy, the heads of suicide bombers always remain intact and thus become a kind of grisly projectile adding to the horror of their last act.

Dave Mehler is a smooth talking trucker with vulture eyes for the metaphysical. he operates out of a singularity, the Landfill, and writes poems w/ his right brain while his left brain processes the road taken.

A grisaille compo(r)t.  A nightmare composition of colorful human waste, flesh compost, A Garden of Earthly Refuse. Convoked:  stupor, petrifacts (‘I am trying to remain vulgar in your presence’).  A triptych.

I read this as glorious Ekphrasis.  Next I imagine-sense A flat horizon, and believe every person who owns a piece of land in the US should float an atmospheric balloon, to show the government that it does not own the airspace above Your head, only You and God do! [by the way, I sell such balloons].  Plectra.  You’ve come a long way, Bosch, baby!  (May be the worst mis-reading of my life…)