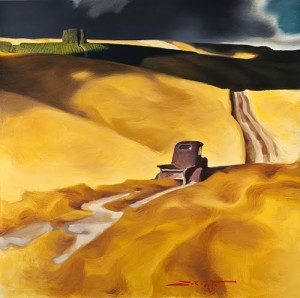 When, sense-y, the body drinks from some hell sunk in the absence of laughter.
The insane body, mad with its lungs of this flesh how it hates white, the chest-sticks
surrounding the blood feel like cathedrals, the brain having seen nothing for days begins to feel like
a bottle, or how all conversations are storms like the sex we’re not having.

How every tooth has its own vision of crazy, and to chew is to rampage the tongue,
sweat stained, unthinkable.

The body has gone mad with your decision, left for dead
like a drug that can no longer be shot, the body has not been
said like a prayer in the midst of a murderer with no beer,
the body rains under itself and stains anything white,
the moon-illuminate, the body rumbles over the road
and into the cornfield, rolling down some embankment
towards ravines, there sunk to its knees to gnaw on crates.

The stink of the body is its madness and its clothes aren’t pretty. The dregs of the body
accumulate, bitter for not being scratched. You’re the sins of the body, and what the body does when
it goes poof, the knife thrust through the eyes into the skull without blood, and how the hell, you’re
wondering, but its legs after legs; you: the kiss with no suck.

You are: dreamscapes laid over an unstained bed,
the dark without being able to sleep, the book with no such chapter,
the parade versus its clowns, and the night drive through the cemetery awake;
you’re what happens running into phantoms while pulling nails out of floorboards, awake, escaping
while smoking a cigarette trying to decide why I would want to go into the house awake, the
inability of water to boil when watched, in other words,

you’re the turn of the century pressed up against the end of a photograph repetitively thinking, in the midst of counting sheep, my own left hand between my legs instead of yours, hearing the neighbors talk loudly in the street at 2.00 a.m., 90 degrees with no butcher paper when you could have just as easily been lying under a pine tree making promises my fingers up to eggs in your bones in the dark while awake.

I could stop now but you’re full of it and I’m the moon
to keep my eyes going and the bed is a table you’re hungry when it’s finished at.
The body gone as necks picked clean of their smells, ill, water in the middle of the night
fresh from a period of hell, the body freaked out and fucked up and fetched for fuel,
the body walking over the hill without you for light the anger-body all in its shoulders,
this rolling effect through the dogs and out the attic somehow, perhaps through
the chimney, or now its nothing but dogs—all returning home moments before dawn;

White grapes shot in the center with blue bulb; the salt; the leakers: the eyes—
crazy with scenes while awake, the old shell game of which hand
is yours I miss the most but this fist, certainly, is mine.

The anger of the body and its madness in animals and pills and in the graveness of wood
of the virgin and how the whiskey feels dumped over mail, in the event of a sickness
asking for a penknife or snow since the kiss which began the long wintering, followed weeks later
by the pain of the half-cut rubbed over your soles and how the fog resembles poems walking on the
bridge, the water beneath evidenciary (full of dropped guns),
the boats in the fog committing sins by rubbing against each other.