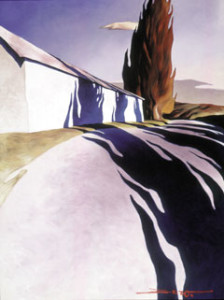 On The Road Again, Z.Z. Wei

Notes From The Ghost Writer Of My Autobiography

After research, I ascertained that I had three choices for a subject:
a living one, a dead one, one not yet born, or the theater.

According to the dead, I am its fire.

The alive was given a church.

For these reasons I chose to write about rain.

Just like rocks are sepulchers for intimate vibrations
I research my clan projected backwards into music.

Then later record the morning when nothing much happens.

Just as stones could be eyes where silence is a car.

Reportage of these difficulties called as such: my rrrrrrr eality show.

Reporting how I lived during that period
where a struck match had just begun to rot.

Editing down my monologue into a cat near dawn. I figured I would tell true
stories about myself that occurred to others and then I was born.

Except for that stain behind light. How the dark punched
me in the future and gave me black ice. And how,

when the ice melted, there was your coffee.

i have always been struck by how lucid greg can be in his finer moments. it’s almost like you’re in a café with him, and there are a lot of conversations all starting at the same time. there’s that general discharge of personality/ personhood. so you wonder, hell, which one is mine/ ours? some of that wonder rubs off here. and possibly a wry look at “life the monologue.” thankfully, greg is also skeptical about pinning down life to a pat answer; he leans more towards the mystery aspect of things.  that’s why you’ll see a lot of give and take, a lot of detours, a lot of free associative metaphors, and a lot of recriminations in greg’s writings. about the last one. the ghost writer. the director of the reality show, the homunculus behind the eyes—a kaleidoscope of archetypes passes through the poems. there’s a constant procession of people, shadows. some of it traceable to biblical maneuvers, some of it more cryptic/ psychological in a very real sense.

that brings me to another aspect of a greg poem. i usually feel guilty about classifying poems this way, i mean we all “know”the rule rt? the poem depends on you. you or the poet depends on the slippage of the signifier. the poet should never come in between the reader and the text etc. but greg does. see, it’s not like it’s greg, in the flesh and blood, who materializes before you in a frisson of poetic thinking. but it’s more like it’s greg’s shadow. and he has a lot of those. as a poet i have never known him to shy away from bringing his own stuff to the table. whatever happens to him , changes him, he allows himself to give in to the process of change and he invites the reader to change along with him or wrestle with ideas/ life events the way he does. for at the end of the day, a greg poem is also about thinking, bloodied knuckle balls-to-the-wall sleepless thinking. let’s tune in to the deleuze channel for a while—“something in the world forces us to think. this something is an object not of recognition but of a fundamental encounter.” (difference and repetition) we have such encounters every day. some of us re-cognize them and pass by quickly thinking it’s none of our business, then there are some of us like greg—not staring into an abyss but climbing down into it and pulling us in.

now you might be thinking where’s the money at? so getting down to it—

“Editing down my monologue into a cat near dawn. I figured I would tell true
stories about myself that occurred to others and then I was born.”

this is as good as it gets. and i mean, in poetry. how many of us have reached this brink of ineffability, this abyss only to find there’s no beyond there, not right then at least. or at least not a beyond we can agree on. what we are usually sure at the end of such voyages is that there is a correspondence b/w where your dark space behind your eyes ends and the world. or maybe osmosis is a better term. poetry as a form of metabolism? i am sure greg will laugh at that.

Absurd! Look at that title! But then I think, ah, it’s the Ghost in the Machine…

Still, everything is subversive and undercuts all sense and orthodoxy in this poem. The self seems insubstantial and not well-described here. You can’t trust any of the conventional “signifieds”. The syntax too is unreliable – “According to the dead, I am its fire.” Referents fade away. There is a blithe disregard of logic. The narrator has three choices for his “subject”. He lists four. Then he picks one he didn’t list.

Greg has an unusual lyricism, sneaky. He makes mundane statements that morph into myth: “I research my clan projected backward into music”. We seem to understand. He seems to be speaking to us in a vast hollow voice from under the sea, but we start to get it.

The ghostwriter, half-way through, begins sharing his notes. The monologue gets written, but it must be edited down to a “cat near dawn”. I envision a few yowls, cursing from windows overhead. The ghostwriter is not too sure about his subject’s/his own self-hood – he feels more comfortable reciting other people’s stories about himself. He also doesn’t want to talk about the stains and the darkness in his life. But what he will talk about, as the poem opens out into a tender ending, is “your coffee” – “when the ice melted, there was your coffee”. There is a sense of completion and comfort here. I feel this line is a simple tribute to a loved one who has been a great help in life. This is why I enjoy Greg’s writing so much – his sophistication, his indeterminacy, the thought-play, and his ultimate seriousness of purpose.