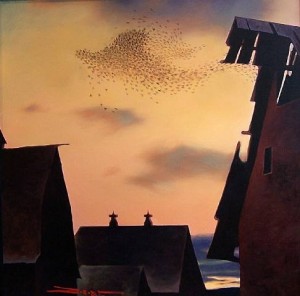 “the threat is muted, familiar values impose themselves, and in the end the mind reduces the pressure upon it by accommodating things to itself as either ‘original’ or ‘repetitious'”
–Homi K. Bhabha

“…the entire creature was in motion, but it was disorderly movement, chaotic and irrational progress involving all six kinds of motion. It travelled erratically in every one of the six directions — forward and back, right and left, down and up. For it was a mighty wave that washed over it and ebbed away from it, a mighty food-supplying wave, but even greater was the disturbance caused by the properties of things as they struck the body — as any given body met and collided with fire from outside and elsewhere, or with a solid mass of earth, or with liquid streams of water, or when it was overtaken by a gust of air-driven wind — and when the motions caused by all these things passed through the body and struck the soul. In fact, that is why these motions came collectively to be called by the name they still bear: ‘sensations’.”
–from Timaeus

He gets caught up in the stairs
one ranged step & one slightly floating
damp, the crippled sunlight bares
his ear, he communicates back with a ring
unwinding each eye into the awe grinding
where resolution is no fair, last year’s
he hears low-pitched or thrown overhead
uneasiness catches up, softens his head
to velocities similar to what the new arrivals
impart, grazes his fingers, he slows down
to invite harmony sparking thru his hair
‘the threat is muted, familiar
values impose themselves’
his shirttail catches in the banister

midnight with every passing sting
he stays on the dust deep-breathing
hot germs cling to the sun
spools shaped by rotation
pedaled thru confusion & confused longing
is it in future projects that
the amalgam nears 9 times
denser than red hot nails at
work:
himself free to take a protracted course
the wincing sun mounts the binaries
spider legs up the river
swells with passing maneuvers
south with the fine structure & knows
best “the firm foot was ever the lower”
quenched lower in the river throes
heat increases pressure
that puffs up his chest
siphons his brightness

“running jump” illustrates Arka’s comfort with the ineffable. One might even say that the ineffable is his specialty. The initial question with his work is usually, what is this poem about? And the answer usually is, something that is very difficult to express in conventional syntax, something that can only be referred to obliquely, an attempt at describing a transitory insight that is fading even as the words hit the page. But since Arka has a formidable mastery of English and very good control of the poetic techniques he finds congenial (evolving rhyme schemes, referents in the form of quotes and footnotes, lengthy epigraphs, fragmentary lines, and strong aesthetic and metaphysical preoccupations), the result is usually beautiful and haunting, an observation of a brief moment of life.

One of the epigraphs here, from Timaeus, seems to me to introduce the poem in clear terms. Timaeus talks about the External – the motion of it – how it rushes through us and strikes our souls. In “running jump” the External seems to consist of the receipt of a complex of sensations, occurring while the narrator is mounting a staircase on a hot day with dust-motes, maybe answering a cell phone. Does he receive the call, or just pause, struck by the universe that at this moment is passing through him? So many impressions; low-pitched sounds, sensation of rapidity, experience of “harmony sparking through his hair“. This might be an outside staircase, with a breeze. But he doesn’t receive these impressions cleanly. All must pass through his own confusion, his thoughts of the future and of all that stings in his life. He feels like a spider legging it up a river. He is breathless. The mystery is intact, an attempt made to describe the indescribable perceptions. And where do the stairs lead? To whose door?