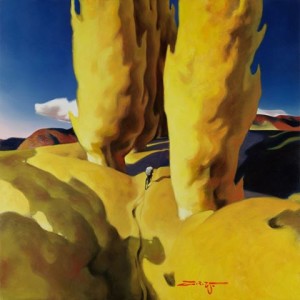 The Law Of Unintended Consequences

Jack and I were lying outside on our backs looking up at the sky.
Janet comes out and says “The watched pot never boils.”
I say, “Christ, it’s the law of unintended consequences, isn’t it?”

We’d been looking where the lack of proof
would one day be layered then breached, the entire whole
of euthanasia gaining and filming itself

up the wreck of our guitar missing the d string, coming to take us
back to the beginning, the future egg, the pound without bark,
where rinse has yet to blood and gold’s putrifixaction.

I was instructing Jack that yes, those are only spirits burning
quanta to dusts, and that one day what’s empty would become cold,
theory winding around itself into holes.

“What have we been looking for all these years?” Jack said.
The lowest common denominator, the tree where everything that moves
will end up and be smashed to pieces.

I think I see it, Jack said, but I laughed, and said,
“No, that’s only me, which, unfortunately, you’ll never get out of,
there in your throat, nightingale, the blossoming flower
or pail filled with first wave,”

…”your unborn daughter,” I went on revising even as we fell
asleep in the grass, “who I was when there was nothing
in the grave waiting for you but her milk.”

Later Janet comes back out and tells us it’s time to come in.
There, on the stove, slabs of beef frying in a black pan,
a skillet, I’ve been told, more like a casket of poems, a belying,
or spraying of grease, depending on when you last had a serious operation.

We sat down to eat, dying as we came alive, sucking
in, cleaning, and dispelling wait through our gills,
being penetrated by and forgiving, constantly, god’s shadow,

some kind of energy, whether it be murderer or enclaves,
soul separated into that same spirit, hurt every day of our lives
by god’s propinquitary loneliness, deer coming right up
to our kitchen window to drink.