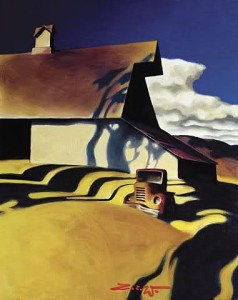 Scientists Conferring At The Site Of The World’s First Corpse

Scientist with the Gloves On:
He will stall in the craw of victims, and be there
devoured by shadows if there are such things.
Think of the heat in the windows!

Scientist Making Notes On The Dead with a Rooster’s Bone in August:
At the end of the funeral he is a hill below the ruin of huts.
An attitude of relief. Also, he is at the cessation of games.

Scientist, Disturbed:
He walks out of the scene where he stumbles.
He sees more of his ham than is comfortable.
The patterns fail.

Scientist, Masking the Face:
Where did the twine come from that wraps up the present?
At what point did the horse fall into the stirrups?
Where did he learn what he keeps forgetting?
Excuse me, but there’s a wing in my past.

Scientist, Speaking to the Pupils of the Eye:
We think, and he is mistaken. We shake
dice on a blanket, which makes him our corpse.
He connects our batteries with desire,
and is turned on for most of the century.

Scientist-Doctor, Wearing Electricity:
(Sticking an oil gauge down the corpse’s throat,
then pulling it back out and reading it)

He’s down a few basement steps.
He’s severely behind on his dreams.