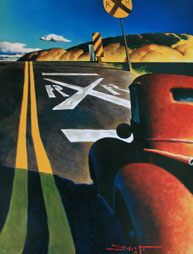 then there’s the ascorbic ‘Fuck! My God!’

you’re in the midst of a horror poem…

I was looking for something dangerous
I wished to impede any idea of sloth
so I bought black socks – six pairs bundled
and dark blue sweat pants – incorrigible,
I thought – then a pair of those Chinese
plastic sandals – light, the goosebumps
underfoot, and a remarkably non-skid sole
and a pair of real high-top shoes – leather –
no breathing allowed – then bought a ciabatta
and lemon soda and went home to wait, to read.

ideas can not be seen

I don’t think of nightless ideas

ideas are not inhabitants

an opposite to dying

ideas can not be seen

ideas are not inhabitants

ya know what I hate is being sanctimonious

I’m no different than them

that’s what I hate

that’s me, him – on to the story…
Ideas are legends
I hate them

your mired fucklust
ideas are wolves

me? I’m fucking a crazy cook – jalapeno ice cream banana split – it was hot and cold
I didn’t have a split banana to present it on – I used banana ice cream
they went fucking nuts – ‘a banana-split without a banana…´

I wish I were not free from guilt – but I hate that word, let’s say credit

what I love is dead

guilt is never a promise

crying thru one eye…

bad thing is you are now a witness

you don’t ‘kill time’ – you kill all witnesses of time

it’s like weakness is desire and desire is sex

(greatest love poem I’ve ever ever written,
but u(r)nreal, nominal, without breath…)
[my delusions are similar to forgetting]

it’s the living who betray me – with dreams of sacrifice

the blood is not my teeth

God how you love a man!

I lost faith when I lost you

I will ever trust another person,

I could be half of you

being human is sitting on a toilet

ideas are not worth ideas

my caskets are linear

Ideas forget you were not aT HOME

The idea is simple.  Do a string of koans of the same moment; or hundreds of haiku written at the same time in the same place over many years; or contemplate 20 minutes worth of lightning; look into puddles in a confined area, all reflecting approximately the same thing, all different; write a letter then tear it into scraps, send the scraps to the letter’s recipient  in different envelopes, mailed on the same day from all over the country. See the same thing differently. See different things the same.

Each line in the poem is an idea.  These line ideas are made of other ideas.  Some of the ideas branch out over various sections of the poem.  Perhaps the poem itself is one large idea reaching back through the various lines.  Perhaps there is, really, only one idea.  Or perhaps there are many ideas but no real ideas.

If you don’t love this poem like I do, what can I say?  The poem is like a lake in which nothing is hidden and yet much can hide.  Water is transparent but if something is deep in the lake, you have to stare for a long time before it becomes visible, and even then you only have a vague idea of it.

Maybe if you were never once a poet, or you still are a poet, this will mean nothing to you.

I don’t think of nightless ideas.

The test of a really excellent line of poetry is that anything you say about it detracts from it.  Even looking at it while you read it weakens it, infects it with the world.  You want very much for everyone to love it like you do, so you feel compelled to say something about it, but unless you say more poetry, it’s hopeless.  Your explanation will slow the line down, the line will begin to stumble, lose balance, and there goes all the numinosity.  Like a butterfly pinned to cotton, you now possess the line, and it’s dead.  Congratulations.

fog hangs low along the banks
just seeing is light

I’m trying to explicate or somehow edify this poem.  The poem defeats me. Thank god.