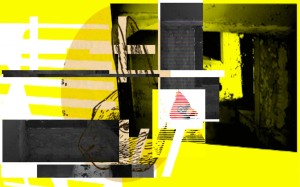 *(note: “TRANSVERSAL” will be appearing coincidentally in the print journal, Spinning Jenny #13.  We, the editors, believe this poem deserves the double exposure.)

Small ash is stuffed in the Corvus
talons to the park, leading devises on
needle knitting hours.

Glitter spills in
the loom, in the hour of our
shed combinations.

A limon tile which is white
coy pond ceiling, swimming in fabric hour.

Small thighs tattooed
with [lights] – and Idiots
among a
wing, holy tomorrow, Bad Apples–
Neon yarn
Stitches the house to a factory’s wall.

Cages cross stitch,
sharpening wires,
sand to glass in a slow mutation
of a silver chest.

Tunneling forward in the train of manatees,
inside of a mucus
the winds of
thread and stone ice fields, leaves and green woven couch
floating in Starfish.

Drinking daisy’s from the
glass temple.
Babbling
the lips
of rusting, potassium rooms
within –

Just as much as
dimensional Nova, the neighbors
of sunset.

Plays
will occur in an oak chest.

Heat will plan and discipline
DNA strings with the fifth
cabinet of a
spring loaded now.

A third flinched perspective layer:
we water the windows –
Drifting
to solvent lights, formed of oranges,
blinking to pouring, walking to
lining.

And inside hands, shelved along the diaspora, sphere
or ring finger of life perches.

Silver painting of the fish.

Now, swimming circles through
clouds under the seams, swimming in and out of spirals
trained to the knife throwing wheel―

Scoop the air into a bucket
the saltwater
layers, air, and cakes.

The dormant isosceles of the
Field, growing
T-shirt taste for [breath].

Japan’s [3d] glasses set on a shelf
in the medicine cabinet.

Purple worm like a dress in the
micro world, in the crevices,
designed around the dark,
for the swim
or infinite
equations
housed in a fear.

Wouldn’t it take
up thirty floors of the cube,
electrocuted pauses.

Written through sounds in
the walls, so much dancing,
apple wings grow saturated.

Science group #5 lands upon the ready-made star,
a photograph of technology’s dead past
A butterfly garden clutched in lab coat sweat
on the train ride.

On the shores
drafting a ‘boat’ in secret
designed
eyes
in a need to kiss.

Groups five and six transplanted this room
with guitar strings, lights,
water, the crown, cardboard
heads, a chair, the table top,
dust covered papers, the DNA,
strings, an edge of the sky,
always folded neatly around the shoulders.

A broadcast on the station 12 roof top making little
piles of sun on its transmission
and Michelle’s flowers.

Silk hair dancing to the radio transmissions
from Russian
satellites
until the night is shadowed
In language,
ghostly faces of Michelle, and
Vladimir at the dark patches
of the house.

Letters,
an orange peel,
the sky.

In ivy shelves,
the rooms pool into a [cup.]

Science group # 1 decides to arouse the sphere, and call indentations a brain.

[laced] in the diamond shadows
groups put iris around the doorways.

With a divine cut in
the stone “biology,” saw-blades dissolve.

Latticework morning
of our garden into the [cup.]

The radio last night
strung together the
chimney to the person,
the diamond to the scissors, rinsing out
the old radio.

When electric static is
left on, radio waves wash the windows
with a shallow tool.

Surges of radon disconnect a  molecule
and iron the alley.

Around the corner,
disturbed birds disappear upon a wire.

With the citadel chop – Coho’s
part of the jumpsuit lays lonely in casing,  jagged edge,
Radio waves send nutrients to the
house caused by
removed dust.

A black mold
from the circuit board of tulip dangling.
There is just enough light
for a twig, in voices,
built of a treasure chest house, stairs,
shooting stars,
fish in brass pond,
and escaping light.

Plants
splattered paint,
rooms that breathe,
Nesting in the clock
a Chandelier.

A brand new felt, butterfly nozzle
collides with the part that
sits nowhere.

Down a rope for
afternoon with Chandelier hands.

The traffic
and the transistor, whispering.

Arms inside
apple trees along a hidden
orchard,
mid future,
draining wind, each other.

The     rest
is
found
inside the transmission
in
picking up
a new satellite.

A soviet segment of the
News.

It is difficult for the exacto knife to cut along the lines and completely remove the “self” from +zach’s poems. Inevitably we inhabit them, consciously or not we breathe his words. There are two components: Transmission and Receiver. We are the latter. The poem the former. By writing this I have already failed to extract myself completely. The Receiver doesn’t care. It only receives and translates.  “Transversal” transmits and reconstructs itself into an emotional narrative. Not emo or confessional emo or any derogatory connotation emotional may conjure. It distills the feeling, the actual linear narrative stripped away, evaporated and the remaining raw underflesh of emotional experience quivering pink in the sunlight. (Point: the Receiver may mix metaphors if he or she desires. Deal.) The Receiver has been translated across the continuum by proxy. And it was awesome! +zach (I am referring to him with his own chosen moniker because the Receiver feels its fits him quite well) doesn’t tell us anything, he shows us nothing, but in that nothing we find everything we never knew we really wanted. Bits and bits add up, swelling a tide of language minutiae and that breaks with wave after wave of the full experience. The Receiver travels thru space. i.e

We know this because he drops us hints. We know this like our bones, like hunger, because +zach makes us live thru it:

It all collects, adds, and accumulates in a way Chess Master Steinitz could never have imagined. We are whole because of it.
At times the bits of flotsam become tangible, almost Braille:

Already woven of breath, as rusted skeletons, cola rivers,
crochet hooked paper flowers
warp and dangle across the atmosphere,
They rise up, crawl from the page, and burrow deep into our marrow.

The Receiver feels! How odd.

With America privatizing space travel, the Russians living in the black for extended periods of time, and the only real philosophy of the 22nd century coming from dog-eared manuscripts of Philip K. Dick it was inevitable that poetry would follow us into infinity. +zach does it well. Keeps us grounded amid the flight with earthy things that we pack in our flesh. Tzara said (I am paraphrasing here, cannot seem to find his exact words) we carry our hearts like a suitcase. For interstellar travel this reads like what humans would tote along.

Thru all of this +zach has his influences, his intended and unintended shadows. Silliman and the LanPo circle rear their Boar’s Head. Ashbery and the oblique poets peer sidelong at us. Tzara and his Approximate Man weave thru “Transversal” in the repeating phraseology. But +zach’s heart eats thru it all. The real triumph of this piece, despite the rare occasional phrases that could be clarified, is the nimbus it leaves glowing in/around us. Our hearts seared with experience, with love, life and the real.

In the end he leaves us standing anew of firm fertile soil (that reminds the Receiver of the black Baltic Earth):

A phenomenology, not of the Physical Universe, but its invisible things, echoing the transcendental [crash].