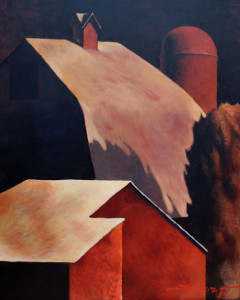 Ms. Davis, While Barely Having Begun Developing the Muscle Discipline Required for “The Gaze”, Receives the Following 95 Director’s Notes After Early Rehearsals for “Donovan’s Brain” Which She Nails To The Door of Her Bathroom

1. Save it for the brain.
2. Considering the nature of love,
3. That love exists outside of the body,
4. It cannot be acted,
5. But it can be performed.
6. Therefore, the role of a devoted wife is one of action, not acting.
7. Supposing, therefore, that a man needs to be heard,
8. The love for that man is not expressed in the face,
9. Nor even expressed with gestures.
10. Rather, love is already off-screen, gathering the necessary equipment.
11. Your love is not the tender stroking of a fuzzy monkey.
12. Your love is not tenderness.
13. You leave the monkey on the operating table,
14. Not for science,
15. For love.
16. The longing gaze,
17. The gaze that hungers,
18. That hovers,
19. That hangs upon the face like a painting,
20. That even in frenzy is no more than a movie playing on the face,
21. Save it for the brain,
22. The brain that is fed by flickering shadows,
23. That lingers above all,
24. That abhors effort,
25. That basks in tableaux and frottage,
26. A pernicious camera,
27. A snail carrying the vault of stars.
28. Save your gaze for the tanked,
29. For the over,
30. For the luminous,
31. Build it up
32. For that moment when you are forced to do it,
33. That moment some think is love;
34. Perhaps you should always hint of mourning that mistake,
35. With a sort of calligraphy fixed on your face.
36. Remember when they said you looked Chinese?
37. Nobody can read Chinese, but it looks like something.
38. Therefore, nobody will know what you are mourning,
39. But they will see a distant shadow,
40. They will imagine being blocked from the sun.
41. This ornamentation, if you will, this distinction,
42. Fixed, as it were, to every expression in an admittedly small range of such,
43. Will not justify, but will form a sort of relief from,
44. The actions you will so quickly and unquestioningly perform
45. From beginning to end,
46. Not including the final scene,
47. Which will be naturally lit, by bright daylight,
48. And will represent the resolution brought by death,
49. The only time of the movie in which you will convey emotions,
50. Like adjectives upon your face,
51. The happy,
52. The concerned,
53. The hope-glistened,
54. And yes, the loving, desirous, hungry,
55. With all action having been resolved.
56. You will be your ghost,
57. Projecting a phantom of yourself upon yourself,
58. A screen within the screen,
59. Stills will be taken from this scene
60. Because everything in this scene is still;
61. The drunk surgeon has returned from Hell,
62. All of you have,
63. Nobody drinking anymore,
64. Nobody smoking anymore,
65. Nobody burning,
66. Nobody looking,
67. Only looked at,
68. Saved for the brain,
69. The brain who is not saved,
70. The absent brain,
71. The unknowing brain,
72. The burning brain.
73. What does a brain feel when it burns,
74. Having no skin,
75. Seeing no flame,
76. Tasting no smoke,
77. Alighted from the spine,
78. Not even touching the walls of its own aquarium,
79. Whose only eyes are yours,
80. Looking past the brain into the audience,
81. Who cannot touch the glass,
82. Who don’t know the color of your eyes,
83. Who are eating something while they try to understand you,
84. Who are locked outside of you,
85. For whom you must be the magician,
86. And the rabbit,
87. And of course the lovely assistant,
88. Who somehow must enter the box with you
89. But still not know how you cut yourself in half.
90. Look in the mirror until you can’t see yourself,
91. Then you will understand what they see,
92. Then you will know what to do
93. And nobody will call you anything again.
94. The rainstorm will shatter the desert
95. And the lightning will strike.

It pays with Don’s poems to look for the real main character, not necessarily the one mentioned in the title. Though Nancy Davis (a B actress who became First Lady of the United States by marrying Ronald Reagan) is a character here, she is only a receiver of the imperatives she has just received from her director, who remains unnamed, but whose personality shapes the poem with a blend of romanticism, medieval formality, and surreal whimsy.  She is not Luther, the director is; she is the people of Wurttemberg, under instruction. She has nailed up the 95 theses the director has given her on her bathroom door. Within the bathroom are the tools of her own religion; her makeup and hair implements, and most importantly, her mirror where she practices her expressions for the camera. Within the Cathedral of Wurttemberg, five hundred years ago, were the treasures of holy relics which could be viewed and thereby offer relief from sin. The Gaze which Ms. Davis is working on is her particular treasure, and will make her famous. Or so somebody told Don, who found that thought intriguing, I am told.

Like Luther, who wants the Church to draw back from the practice of selling indulgences, the director wants Ms. Davis to draw back from the wanton use of this expression she possesses, the Gaze. Both relief from sin, and use of The Gaze, require authentic action, not payment of a few coins. Ms. Davis is instructed in these 95 theses from her director to remember that body and brain cannot exist independently. The poem, according to Don, whom I had to inveigle to reveal his intentions here, is about “brain/body disconnect…acting is obviously an important metaphor for whether you are truly in your life”.

O yes; yes; this is what Don is up to in this poem, and this is only the beginning. For, not content with situating us in the 1950s with Ms. Davis, who in turn is dealing with a structure imposed five hundred years before by Martin Luther, and who is rather a stick figure in the poem, we must also incorporate a third metaphorical universe, that of the film Donovan’s Brain, the 1950s scifi/horror film. Some of us, the extremely old and persnickety, remember watching this film of a Saturday morning as children, about a rash scientist who attempts to keep monkey brains alive forever, who has the opportunity to save at least the brain of a great scientist in what I recall to look like a big pickle-jar. Alas, the Brain, thus rescued, begins to degenerate, exercising a homicidal power over others… Ms. Davis’ Brain is not at risk, but brains in general are, when they are disconnected from the body, as in, perhaps, bad acting.

And all of this is only the setup to this poem, which now works through a set of instructions to Ms. Davis. Again, these instructions reflect the strange fancies of the director; they are suggestive, not precise. For instance:

8. The love for that man is not expressed in the face,
9. Nor even expressed with gestures.

73. What does a brain feel when it burns, …
78. Not even touching the walls of its own aquarium,
79. Whose only eyes are yours,
80. Looking past the brain into the audience.

In the end, a return to transcendence is possible:

90. Look into the mirror until you can’t see yourself, …
92. Then you will know what to do…
94. The rainstorm will shatter the desert
95. And the lightning will strike.

And this is the grandeur of acting, of the stage, of the movies — it can be a transcendent art. The lightning strike symbolizes, the poet says,  a more general enlightenment, getting beyond the self.

Why is the scientist’s wife, a bit player in the movie, the vessel of all the symbolism in the film? She is neither the Brain nor its Controller, she is the bit player whose eyes must widen at the right moments. Why must she bear the burden of Martin Luther and transcendence? Call it a caprice. Say that the poet has found the symbols in the film, abstracted those, and inserted them into the brain and body of the young actress who does not bear that symbolism in the film. The film has collapsed into Nancy Davis. She is the message. She stands on the sidelines, absorbing the action, the Witness. She is Wurttemberg, the people, the universal.

Or maybe I still have Don’s 95 Theses all wrong. The next 500 years will reveal their value. Meantime, read these instructions. They take you back to the body where we must all return before we can live with lightning.