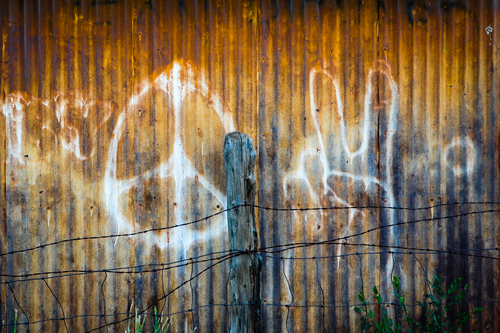 Some people mow and blow their lawn
at first light. Some people plant
milkweed for monarchs. Some keep
a dog tethered to a tree. They may
or may not smoke on their porch.
Some will tell you a group of towhees
is called a teapot, some that a cheetah
does zero to sixty faster than a Ferrari.
Some people think whatever they say
someone else wants to hear.
Some will never wear polka dots.
Some seek enlightenment, some revenge.
These may be the same people. While
you are meditating you may wish harm
to the fucker who sideswiped your car.
You can love that cicadas sound like
secrets told to everyone, but hate the heat
they thrive on. You loved Kevin’s
Home Improvements sign on his truck
(“One call fixes it all”) until you met Kevin.
Some people chase their partner crying
into the street. Some people aspire
to sainthood. Some fly a flag you want
to bleach or shred. Some are bowed
by a mantle of sorrow. Some have too much
time, some are actively dying. They may
be the same people. Some eat handfuls
of sunlight. Some hear children’s voices
and think ghosts. Some do not know
what a ballad is, or a prayer. Some
pretend they care about nothing
but walk to the park anyway.

This poem contains a number of fragmentary images whose substance adds up to what a “day of sheltering” was like/is like. During days of enforced idleness, pointlessness becomes the point. My favorite phrase is “cicadas sound like secrets told to everyone.” Nice!

A wonderful musing. The anaphora is terrific. I particularly like the repetition of “These may be the same people.” I might even add it one more time toward the end. I like the mixture of the mundane (“Some will never wear polka dots”) and the tragic (“Some are bowed/by a mantle of sorrow”). I also like the break from “Some” in the middle. The humor is great, especially visualizing harm while meditating. I am less certain about Kevin. Not sure it merits three lines. I really like “Some eat handfuls/of sunlight.” I found myself wishing you ended with “Some do not know/what a ballad is, or a prayer.” Powerful!

Faiths and dogmas that compel us to act in a certain way; personal truths and quasi truths that define our engagements; idiosyncrasies that watch over our sleep; scaffoldings that prevent reality to crumble in front of us; survival skills that keep the predators at bay; prosthesis for the soul; reliefs, human comforts; fancies, incubi, and the fine line in between. The choice is infinite. Which one is mine? Which one is yours? Their affinity is crucial for our communication and mutual understanding.