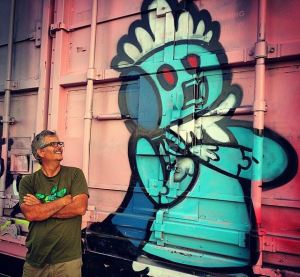 Karen Golightly approached us about featuring her photographs of graffiti art (mainly from Memphis, but also locales such as Dublin, Chicago and San Francisco) for an upcoming issue and I accepted on the basis of the beauty of the work. It was only later that I began to realize how much graffiti synchs up with our mission to promote excellent but under-acknowledged, commercially nonviable and thus ‘pure,’ often blogged or posted online poetry, therefore virtually anonymous work.

She says, (snagging some quotes from her essay in this issue):

“They can’t sell their work, which would seem to be a drawback, but it also opens up their audience and accessibility. In that way, everybody owns graffiti…..To that end, they [viewers] will look at a photograph of the same piece and consider it art. In my work, I try to show a new way to view this public art that people have ignored for years. By zooming in up close, or pulling back to see the work, both separated from and integrated into its surroundings, people can see beauty in it.”

Earlier on in our correspondence, I told her:

“I feel like I’m publishing the poetry equivalent of graffiti artists–not that they are doing urban poetry slams or writing hip hop or rap songs but they are every bit as disenfranchised and isolated (I believe) and many of them as accomplished with language as these artists with spray paint.  Like graffiti there is little commercial value to what the poets are doing and they receive no remuneration for their work, and there’s very little appreciation or understanding much less prestige or acknowledgement or validity in being a gifted poet.  One feels very invisible and sometimes even ashamed to admit they are a poet who reads or writes poetry.”

To my untrained eye some of the graffiti photographs have the sophisticated color palette of Rothko and the painterly texture of Van Gogh. These are hi-res photos—if you click on them it allows you to magnify and zoom in on parts of the image that interest you. I strongly recommend doing this.

Also as it happens this issue seems to have a preoccupation with issues of faith. It wasn’t planned that way by me (though after a while I began to go with it), but often, when things go right, issues seem to fall together with a will of their own into an organic cohesiveness. I hope you will be as challenged and intrigued and occasionally filled with wonder at the beauty of this issue, as I was, putting it together. Poetry has a crazy way of surprising us by its tenacious ability to survive and propagate and pop up when and where least expected, similar to those mischievous, sharp-toothed dinosaurs on Isla Nublar in Jurassic Park.