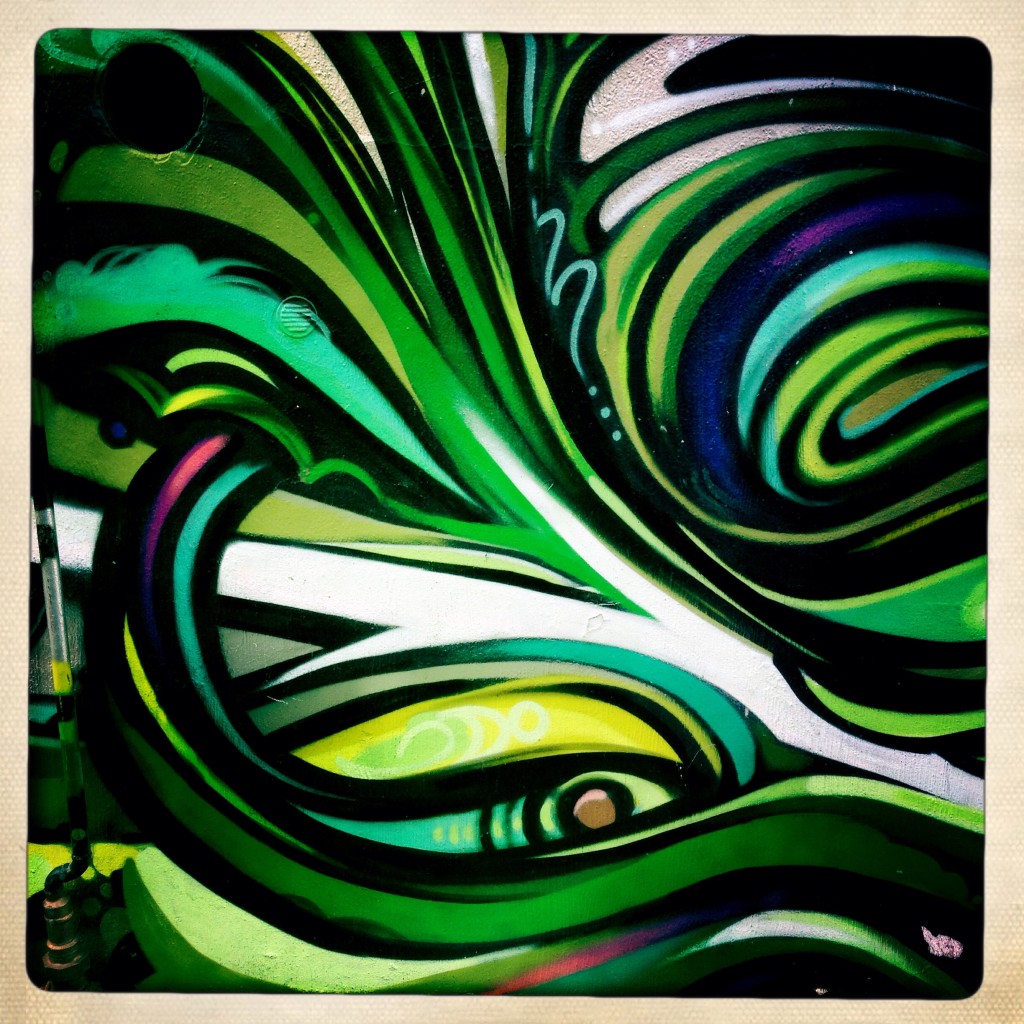 Graffiti: Stories for the Lucky

By Karen B. Golightly

Drive through most any city and you’ll see it, hiding in alleys, looming high on overpasses, gracing abandoned warehouses, donning ditches and culverts, painted on the sides of dumpsters, buildings, and trains. You may try to ignore it, but it’s there, when you go to the movies, drive to work, walk down the street. And it’s changing, moving, expanding, rising, and becoming much more than a name scribbled on a wall.

Gang tags, vandalism, urban blight, scrawl, bombing, throwups, writing, pieces. But to me, it’s art, in its most public form. In a picture or a word, it tells a story, the story of a guy with a can of spray paint, of a building, of a street, of a city. 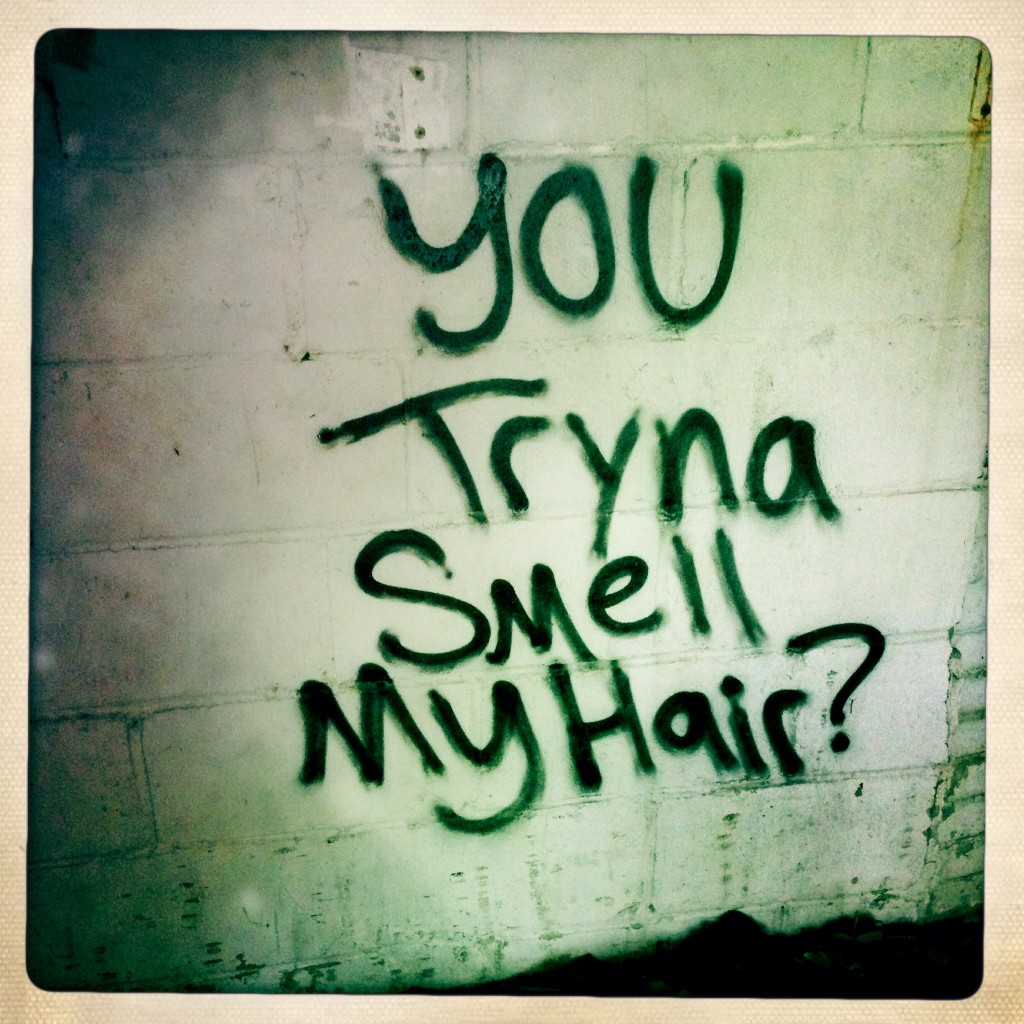 Graffiti has a lot of names, but very few faces, despite the marks writers leave behind. Trained, some in painting, in graphic design, others by their mentors and fellow graffiti writers, these guys (and some women) move at night, in hidden spots, showing their work to the lucky few who pass by before the work gets “buffed” by owners of the property or the local “beige teams.” As Memphis graffiti writer Rakn says, “The beauty of graffiti is that it’s temporary. It’s not meant to last forever. And only the lucky ones get to see it before it disappears.”

Greek graffiti writer INO, stated, “If you want to learn about a city, look at its walls.” But you’d better look quick, because it may not be there tomorrow. That’s one reason I shoot graffiti. I’m attracted to the graphics, textures, colors, scope, techniques, artistic talent (often while dodging trains and police), humor, rhetoric, and even the bravery of the work. But I’m also drawn by the immediacy of graffiti, the fact that few get to view it, and I try to capture the moment before it’s erased, transformed, or buffed away. If I can change one person’s negative perception of graffiti by showing them what it looks like through another lens, then they too might consider it art. And then, they might look a little closer to see what tales the city is telling through its walls.

Graffiti appears in lots of illegal places as part of the urban landscape, but writers are quickly opening graffiti up to art lovers, appearing on permission walls, commissioned for public art projects, showing in art galleries, and plastered all over social media. Even on t-shirts and coffee mugs, graffiti is finding its place in other places than overpasses and train yards. Placement, it seems, is as important as content for these artists. Writers weigh the dangers of the art, getting arrested, fined, and injured with finding a place where their piece can “ride,” or remain untouched for a long time. Bigger isn’t always better, though it can be impressive, according to Memphis writer, Nosey: “A lot of times, instead of writing my name huge across a surface at eye level in plain sight, I’ll pretend to tie my shoe and write something really small on a piece of metal stretching out across the sidewalk,” because “even if it’s 42 feet tall, staring them in the face, a lot of people will not so much as glance at graffiti, because they don’t care about being connected to their surroundings.” 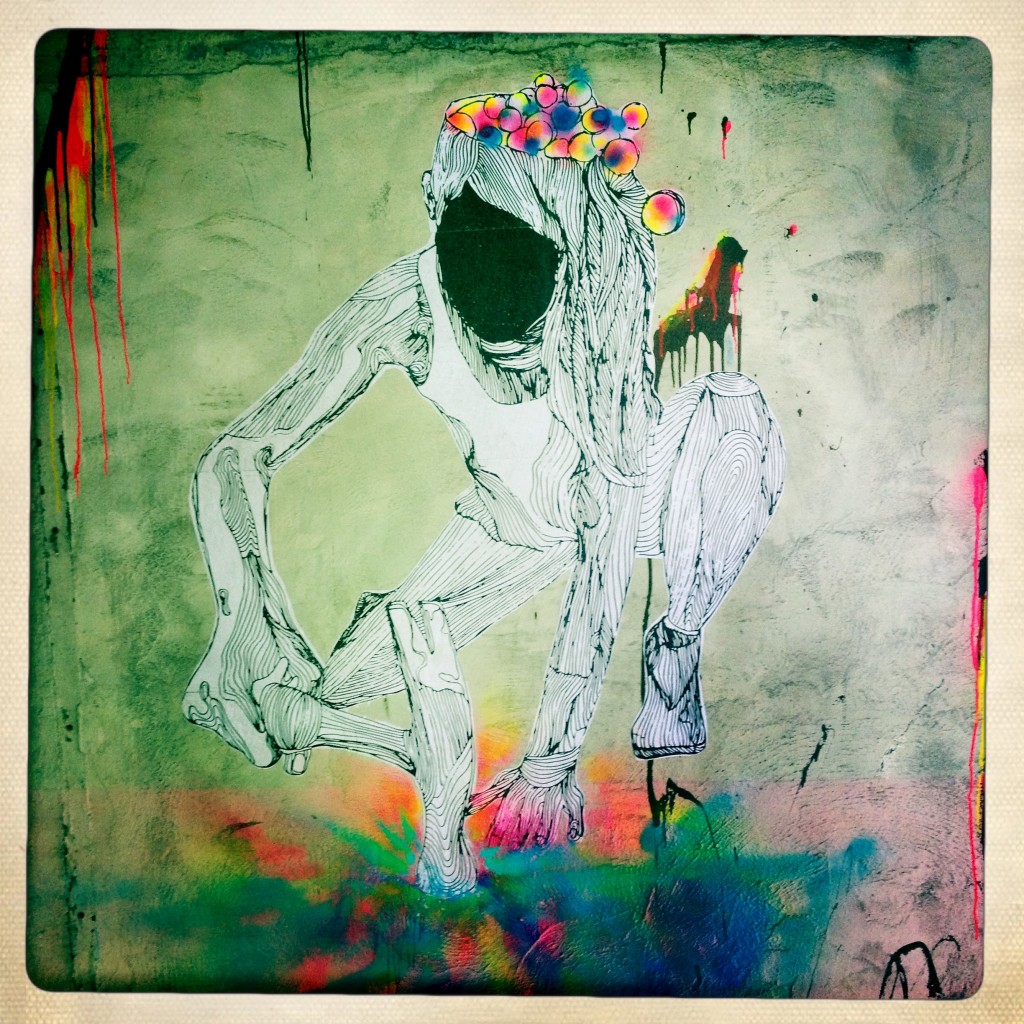 Graffiti writers’ obsession forces them to stay connected to the world around them, scoping out spots as they ride around town, sometimes considering the consequences of their actions, and other times painting because they want to, they need to. Part of that seems narcissistic, leaving your physical mark on the world, your fifteen minutes of fame through eight-foot tall bubble letters, spelling out SMOKED or TAKI 183. Their names both preserve their both their anonymity and their reputation. But the work is also a reaction against marketing and advertising that bombards us verbally and visually. Rather than push consuming, graffiti pushes expression, through words and images, through paint and walls. As the lowest-paid fine artists in the world, graffiti writers paint as a compulsion; they are pulled to walls and ditches, to railyards and abandoned buildings, because they can, they need to, they want to, they must.

Each piece tells a story, of their names, the images that speak to them, what kind of day they had, how they see themselves. A marriage proposal, an homage to a fellow artist, a superhero, the skeleton of rat, a cowboy, self-portraits inside of O’s, praying hands, birds, lots and lots of skulls, every imaginable body part of a woman, hearts, hearts, and more hearts, each piece carries its own tale. It tells the story of the writer and the paint as well as the surface upon which it rests. The craters in bricks and the crevices that run along pipes all become part of the work. The signatures tell their names, their crews, their cities, where they belong. 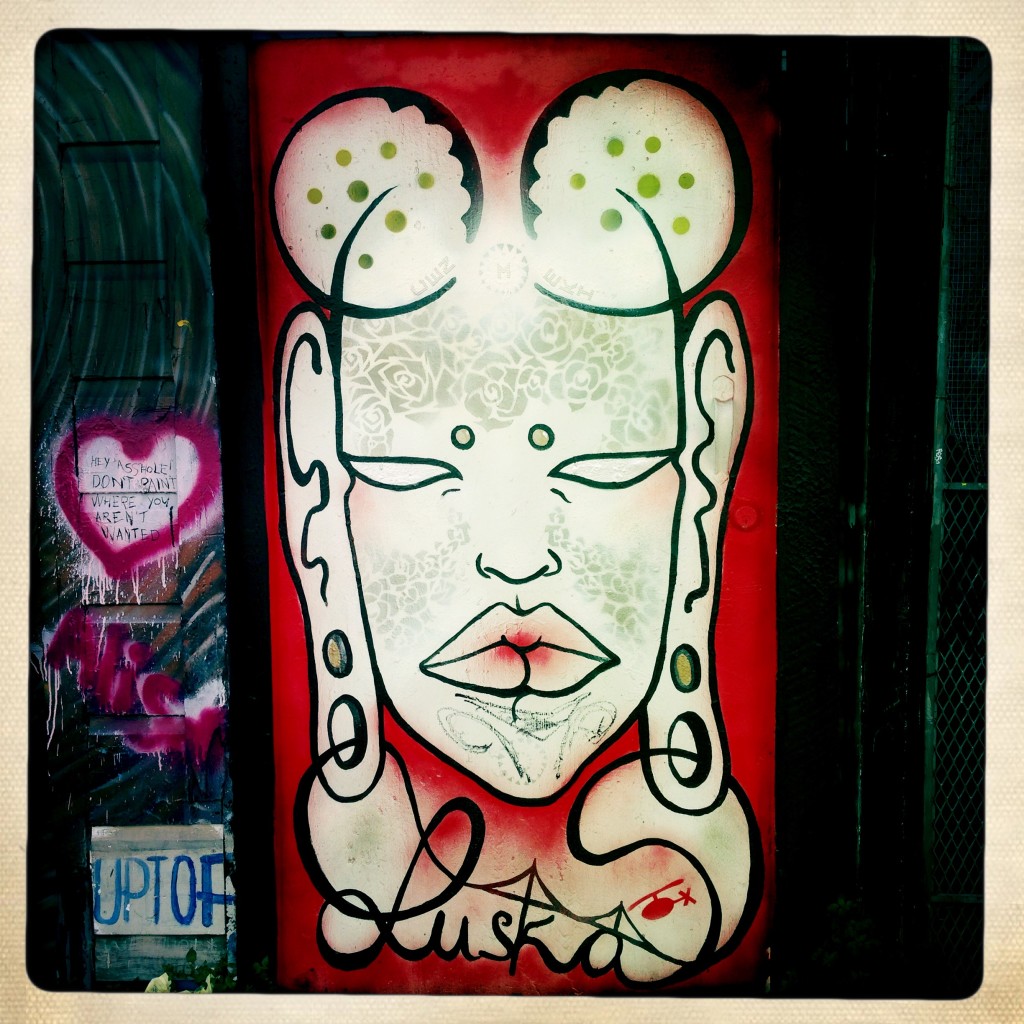 People complain about graffiti, even the work that’s done legally, critiquing its lack of skill, simple techniques, and cheap materials. They think of it as a sign of danger, that criminals are moving in, marking their territories, and gangs will start taking over the neighborhoods, pushing drugs and prostitution, moving into a kind of chaos, all driven by the mere presence of paint on walls. It’s $3.58 for a can of spray paint, which reeks fear in the calmest businessman at the sight of it on his parking lot wall. But I’m not sure they’re looking hard enough, these people who find fault in the artistic endeavors of these writers, most of whom just want to honor a historical figure, demonstrate their skills, or say, “I was here. I am here. I have a name, a story. I’ve made my mark.” Writer Nosey sees the variety of artistic ability in graffiti writers: “A piece can shout, I WAS HERE. ”Some people shout louder than others. Some people try to shout, but it ends up looking like they have a speech impediment.”

Their materials are simple and cheap, by necessity. They use mostly spray paint, lots and lots of tips, permanent markers, photocopies, stickers, and an occasional paintbrush, all of which must be easily transported, light enough to run with, and stable enough to survive the elements in outdoor locations. Unlike studio artists, their connection to their palette extends into their art. They turn imperfections into highlights of the work. Surfaces become integrated into pieces, a hole becomes a monster’s mouth, a crack becomes the water under a fish, a corner holds a surprise around its edge. Danger and adrenaline become part of the process as the uncertainty keeps them addicted.

It must be the adrenaline, because it’s definitely not the pay. Graffiti artists rarely ever get paid, relying on other jobs to support their artistic habit. Sure there are famous writers who have turned their obsession into a profession, like Swoon, Shepard Fairey, Banksy, and others, but most of them make little from their passion. Traditional fine artists work in a medium, whether it’s canvas, in metal, or clay, that they can transport to a gallery or sell to an individual or a company. Graffiti artists are unique. They can’t sell their work, which would seem to be a drawback, but it also opens up their audience and accessibility. In that way, everybody owns graffiti. 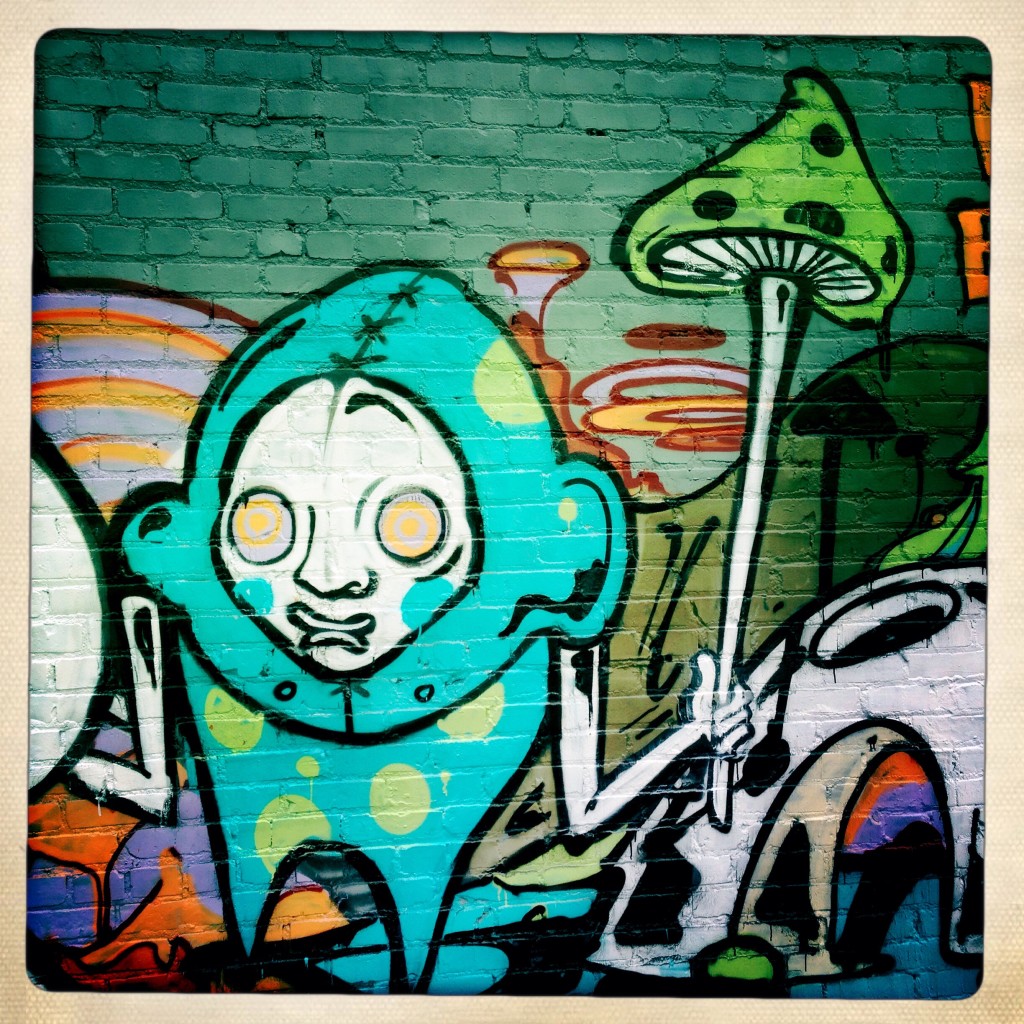 But, in many cities, such as Memphis, where I live, graffiti isn’t as easily seen on every street corner, as it is, say, in places like San Francisco or Seattle. So capturing it digitally is a way to open up that access, especially to folks who would never consider graffiti as art. The form itself, with all of its connotations, repels them, even invokes fear in some viewers, so they turn away, preferring to duck into art galleries instead of the alleys behind them. To that end, they will look at a photograph of the same piece and consider it art. In my work, I try to show a new way to view this public art that people have ignored for years. By zooming in up close, or pulling back to see the work, both separated from and integrated into its surroundings, people can see beauty in it.

There is the issue of photographing someone else’s art and claiming credit. I can’t claim credit for any of these works. I document them, focus on textures and images that interest me, and try to capture them before they disappear. I want to imprint the image permanently, instead of relying on the short lifespan of a piece that’s been put into the public domain. But the graffiti itself remains both owned by the writer and by the general public, who have, in viewing it, made it their own. To that end, I try to give credit to the original artist when I can, but at times, their self-imposed anonymity leads to uncredited photos. 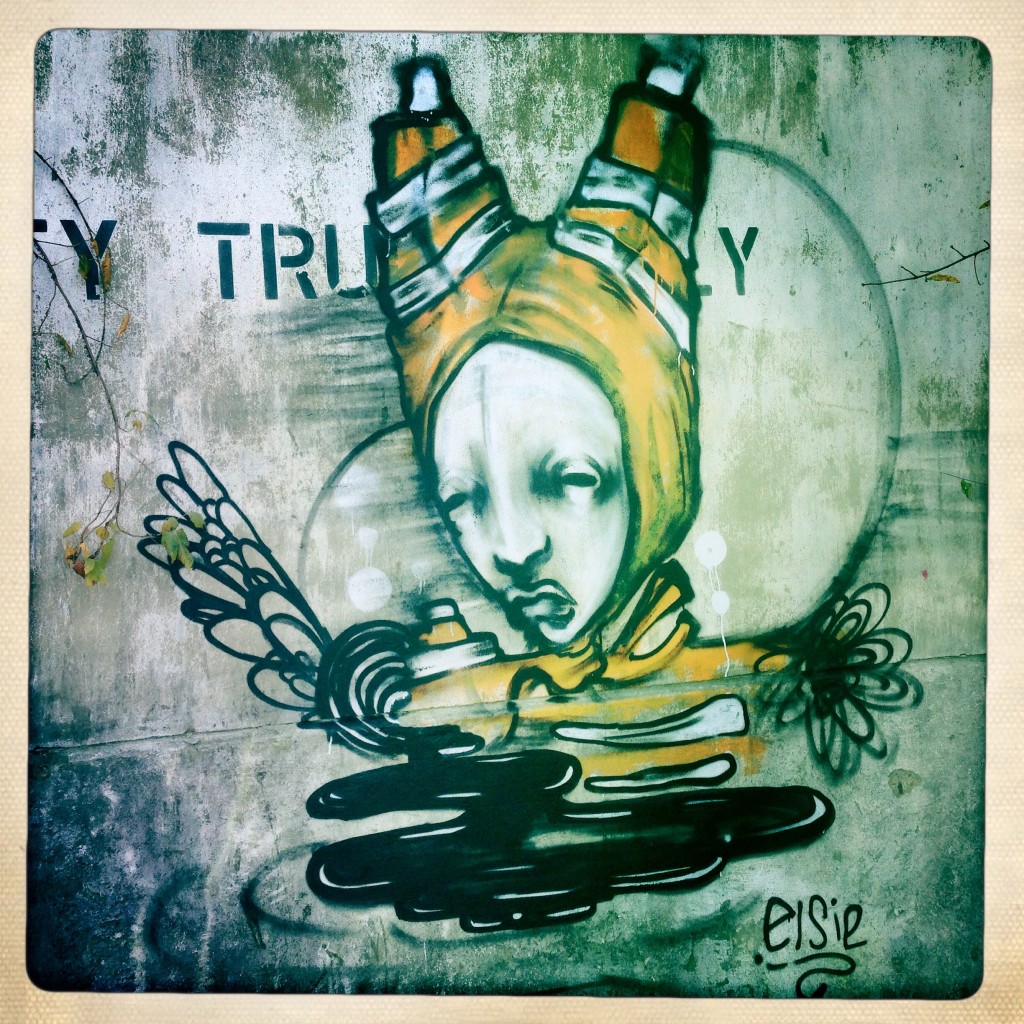 Several factors have changed graffiti, but the internet is one of the biggest influences, allowing toys to make a name for themselves overnight, providing inspiration and designs to a wider audience, and connecting graffiti writers all over the world. Toys (or newbies) have it easier today because they can paint ten pieces, put them on their Flickr account or Instagram and it looks like they’re “crushing.” They can become a king (an expert) overnight. But being a king takes more than just a virtual medium. They have to learn the craft, the materials, the spots, and make a name for themselves not just within the graffiti community, but within the community at large. An appreciation of this transient art by non-artists is high compliment to these crews.

So, take another look, the next time you’re driving to work or school. Look up at trestles where the train has stopped. Peek down alleys and into the windows of abandoned buildings. Focus on overpasses and convenience stores, or newspaper boxes and street signs. Or look down at the sidewalk. Look closely, because you might miss it. It’s there, if you take the time to notice: throwups, tags, names, pieces, art. Graffiti is here. They are here. And they have a name. They are telling their stories, and the stories of the cities in which they live. You’ll be surprised: some of it is better than the “art” you’ll find in galleries and museums. But you have to look fast to be one of the lucky ones. 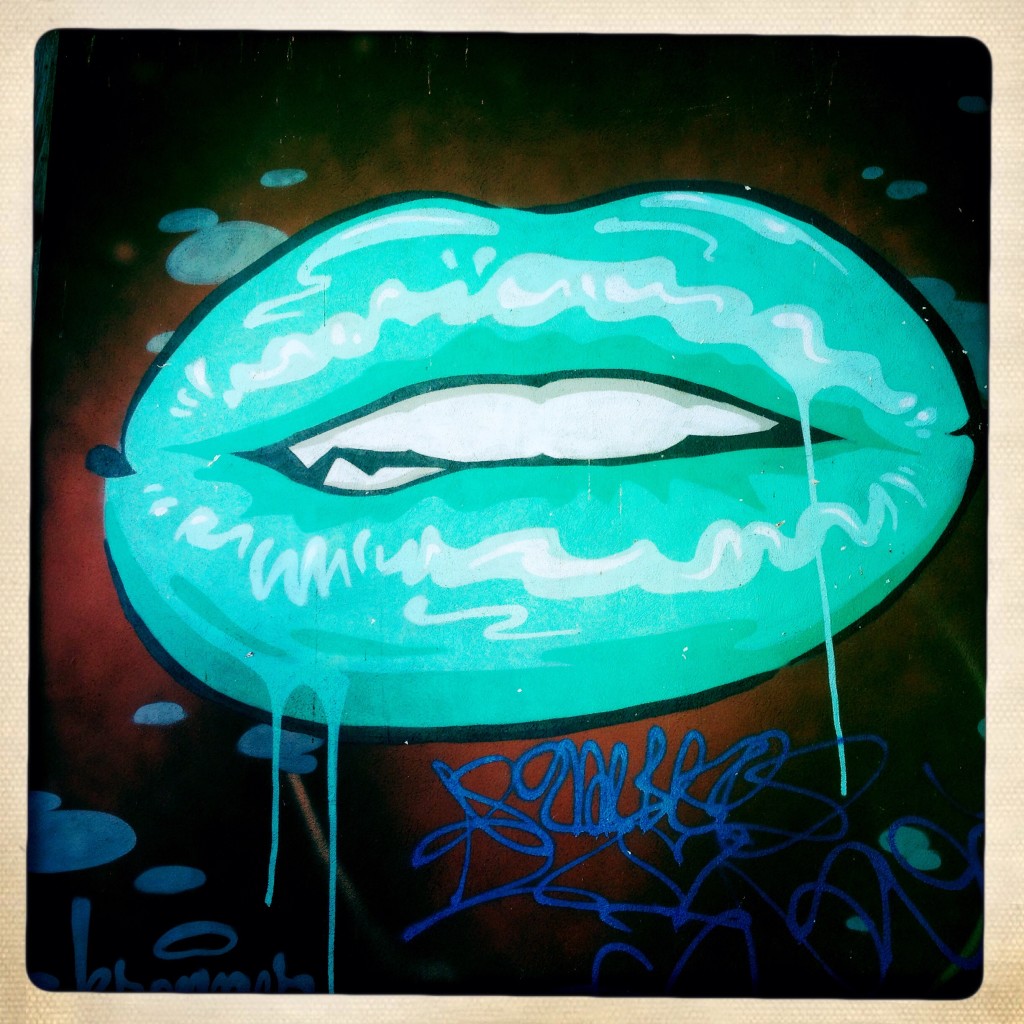