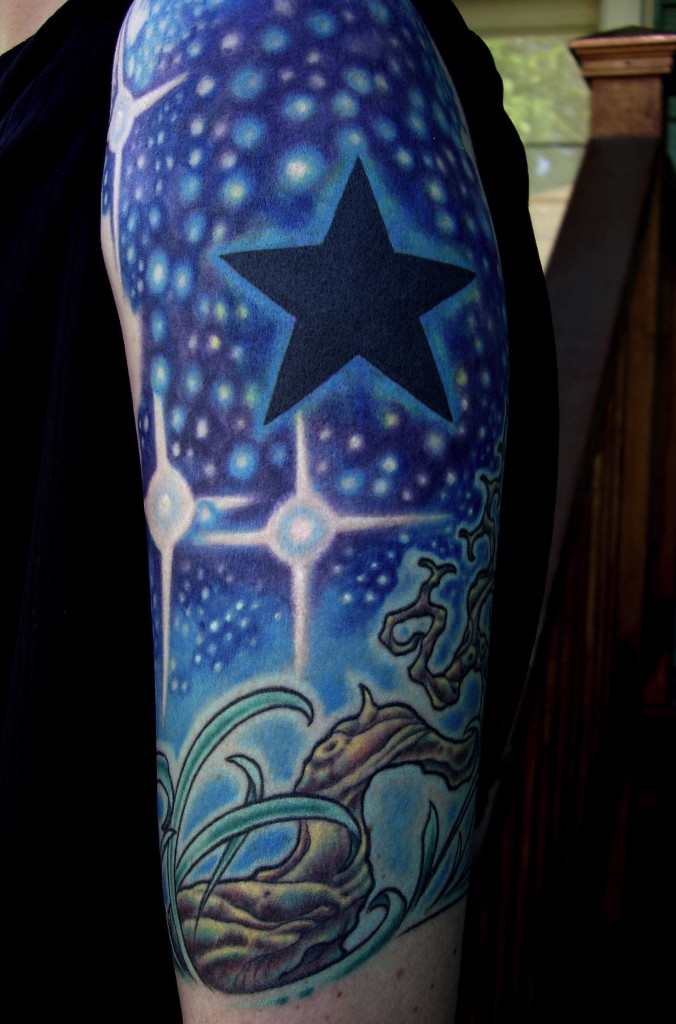 “Even our genes are subject to our beliefs.”
–Vin Prihamanda, MD

Humans also gambol. Red and yellow and black and white
(not a compound subject in standard English,
adjectives modifying the noun and simple subject)
humans (and an intransitive verb) gambol.

I’m talking to me.
(Frolic is a synonym.)

Mose is pretending to be blind. He comes around with his seeing-eye chicken,
an overweight rooster named Smiley, in harness on a leash. They
join Thomas Byron at the Storyteller fountain.
“You forgot your Hoover cane,” says Thomas.

Last week Thomas had a vision.
In his heart he stood on the levee.
The river water became souls, billions of souls flowing into God,
flowing inexorably a few miles away into boundless sea.

The fountain’s jets arc water up and it settles like rain
on a man with a goat’s head reading from a book ( I
actually met the analogue of this creature when I was 6),
reading to dogs and sheep and an alligator and several frogs. Actually,
the water comes from the mouths of 5 frogs at the points
of a pentagram.

The rooster pauses for air.
A girl teen on rollerskates sets down a piece of sausage for Smiley.
The rooster loses interest in the seeds and begins to rub his head
on her silky smooth and firm legs.
“Errhhh a errhhh a durrr,” he crows.

Thomas asks “How are you now, hon, not even 2 decades into your job
on the planet?” She considers this an inane question from an older person
and not worthy of any reply. She skates away.
“You scare people,” says Mose.

The Hebrew priest placed his hand on the goat’s head and confessed
the sins of his people and then drove the goat away, into the wastelands.

Delbert Whiggins is the name of the white slaveholder
who raped Mose’ great great grandmother and contributed
a sixteenth of Mose’ genome. “His guile follows me,” says Mose.
”I picked that up in the early 1800’s.”

Mose has lately been witnessing to Thomas about Jesus Christ.
(This is a compound noun; it is only a name, as John Smith is a name.)
Thomas has known about the redoubtable Galilean for a little over 300 years.
For Thomas, Jesus is a salutary influence, like Henry David Thoreau or Mahatma Gandhi.

He saw firsthand the human slavery as practiced
in the American South. He detested it, chattel, people as chattel with not even
the slightest chance to take the helm of any personal vehicle of will,
slaves belonging to Christian owners who justified the system with Biblical teachings.

On a not quite conscious level, then, Thomas stopped considering a God of love.

John Galen Holliday, MD, poet of storm and stress who uses an innocuous pen name,
walks up and sets a half-eaten hamburger with all the toppings in front of Smiley.
“Errhhh a errhhh a durrr,” crows Smiley, forgetting the last bits of sausage.

Thomas considers poetry to be of more value than Western medicine.
He eschews pleasantries: “You have the gift
of naming. Never give it up. Never relinquish it.”

Doc sits between Mose and Thomas.
His attention is on Smiley. Animals fascinate him.
He believes them to be free of the human scourge of concupiscence.
He once wanted to be a veterinarian.

Doc has lately become a Catholic Christian. Mose is his Deacon.
“You gave me a piece of the Host that Father consecrated at Mass, this a.m.” he says.
“God is in the details,” says Mose. Doc goes to Mass every day.
He is almost a year out of serious addiction,
Valium- Dilauded- Fentanyl.

Last week Doc had a vision.
In his heart he saw Jesus addressing hundreds of followers.
Jesus said “You must eat my flesh and drink my blood.”
Most of the hearers were offended. Jesus watched them leave.

Chemical dependency runs in Doc’s family.
He has lately completed an exhaustive periodical search
on addiction as disease.

In the late 1980’s, he made a study of common birth defects.
Spina bifida bothered him, cleft palates bothered him,
but it was the anencephalic monsters that he could not shake,
newborns with only a vegetative brain, no higher function, short-lived,
unable to apprehend beauty, or humor, or themselves.
This solidified his atheism.

Doc’s chorus gambols in the fountain.
Six grungy old men and two semi-hot women and Jeanette,
a project-dwelling cynic— they leave off Doc’s case just now.
They hoot and whoop in the spray. They splash each other.
They may also be scared of Smiley who is still working on his hamburger.

“There is evidence now that our genes do not necessarily determine
our biology,” says Doc. “We are actually not at the mercy of our DNA.”

Doc segues into a reverie. As a child, he was taken to an alligator ranch
near the Okefenokee Swamp. This was before alligator meat
began to be regarded as a delicacy by anyone other than the Cajuns
in Louisiana. A nearby man tossed a cigar into one of the gator’s mouths.
Another guy threw an empty Coke bottle at the same gator.
This rankled Doc. He asked his father about it. His Dad called them
a couple of “lowland plains hillbillies.”
And so on.

Our John G. suddenly wonders why he is thinking these thoughts.
In recovery, he has learned about triggering circumstance.
At times, he is able to watch his mindstream in a dispassionate manner.
He does this every morning when he meditates. Right now,
he believes his chorus is just rattling the bars on his cage.

Last week, Smiley had a vision.
In his heart, he found himself in a chicken coop with dozens of fine hens.
The signals from all of them were “Go!” He went,
and he went, and he went.

Jeanette takes an abandoned cup and throws water at Doc.
One of his grungy old guys tells her to “desist.” Doc once believed
the chorus was him. He no longer thinks this way, however.

Smiley is the fortunate product of hundreds of years
of selective breeding. He is randy and potent by design.

Thomas and Doc and Mose are the products of many many many thousands
of years of breeding based on vital yet subtle definitions of beauty and desirability.

Mind and imagination, will and emotion are synonymous to soul in these three men
and a chicken. Any being—air, rock, water, wood, flesh, spirit– carries existence.
Thinking is only one form of being. Today, Thomas and Doc and Mose and Smiley
and the entirety of the universes exist with ease. (The infinitive “to be” implies
a state of being; “I exist” is a complete sentence.)

At the Storyteller Fountain, just now, Thomas and Doc and Mose and Smiley are not
merely waiting for their various genes to turn on or turn off. For them, intelligence, love, joy,
body-mind and heart-mind are subject to will, and even will proceeds from choice.
They are not consciously aware of this.

Last week, Mose had a vision.
In his heart, he stood on the bank of a river.
A very Semitic Jesus stood waist deep in the swirling water.
He bid Mose to come into the silted stream.
He cradled Mose’s head and lay him back into the flood.
He brought him up again and Mose was all alone.
A white dove hit him squarely on the head. It was light;
light; it was all light; nothing but light.

For Thomas and Mose and Doc and Smiley, each with good treasure
in his heart, balanced on a fine point, volition trumps DNA. Nothing
is determined apart from belief. Beliefs operate their bodies and their minds
and manipulate the nearby quantum fields of reality.
Each cooperates in the creation of this common world.
They are not really consciously aware of this, either.