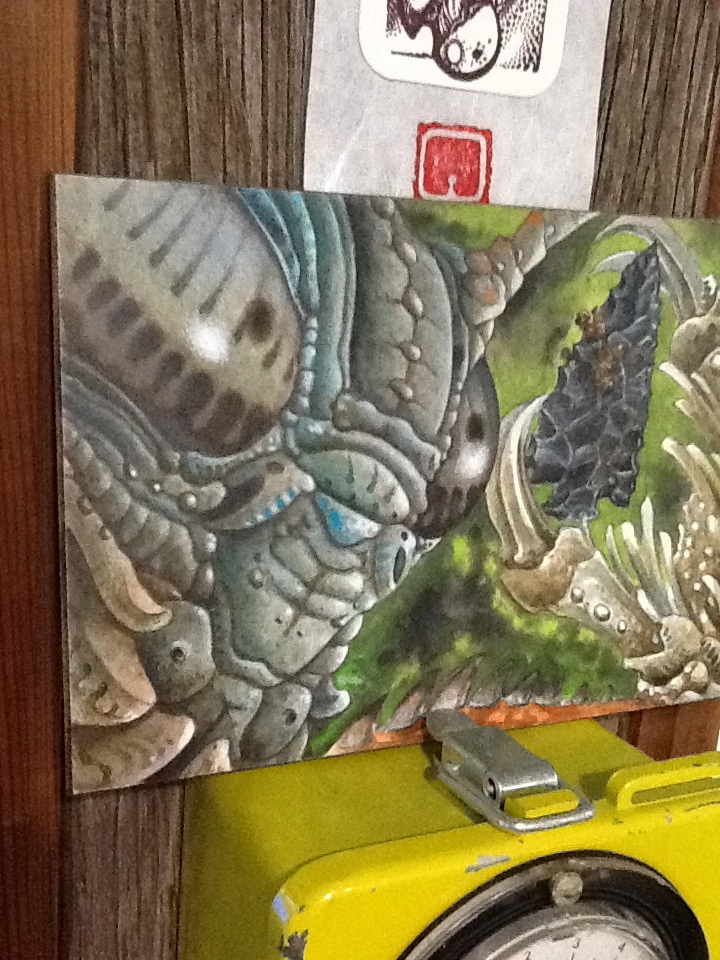 The Fantastic Voyage: Review of Zachary Hamilton’s chapbook, There is a Story in Meat

Imagine if instead of Tender Buttons, Gertrude Stein’s subject matter was warehouses, longshoremen and children’s toys, a ship’s captain, cute animals and candy canes, in the context of Freudian sexuality amidst a violent whimsical streak, written in a style with slightly less abstruse grammar and a little less repetition and you’ll come close to what Zachary Scott Hamilton has attempted. There’s a bizarre blend of urban fringe subculture and childlike innocence; the disenfranchised and marginal with brand name toys and foods as descriptors, kittens as characters standing in for those acting and acted upon, and a surreal dystopic dream vision narrated in chaotic stream of consciousness. It’s original in content and style of writing, and unlike most experimental writing in this vein, it holds a reader’s interest—it is wild but not so wild one isn’t drawn in to discover what both the writer and the characters will do next. The poem appears to be a series of thirty linked episodes that are numbered in reverse, which seems to belie the fact that there are poem titles (subheadings?) suggesting they might be individual stand-alone poems. One of the ways Hamilton can hold our interest in the midst of a long, experimental poem with his unique vision and technique is to utilize narrative and something like a script of characters on a dreamquest to ‘Bermuda’ to create action and story in his chapbook. The characters are objectified and more like things at times than people and the universe is very constructed and artificial, partly to convey Hamilton’s version of satire and dreamscape, but at other times the speaker which is possibly himself or his characters display motive and instinct. The lack of individuality, personality or spiritual capacity is definitely part of the point here, as one gleans from the title immediately.

The effect of juxtaposing innocence and perversity is at times endearing and simultaneously disturbing. For an example, let’s look a prose poem interlude,

Aside from hands being disembodied, is the juxtaposition  or them next to candy canes ‘bounding’ through a warehouse candy-land where they are sucked into a story and either torn apart by machines or are spirited to a slaughterhouse where other animals (real ones?) are.

In a previous section a Heineken shipment is about to be delivered to a dock for loading on a ship where the ocean is made of silly putty and the cumulus clouds are made of Legos, but the characters in the form of ‘white headdresses’ are staging a robbery by distracting and fighting off sailors and making off with cases of Heineken to their shantytown, the description of which is a whimsical place sounding like a kid’s art project,

The effect is something like a perverse Disney movie in which threat and danger are not just hinted at by hunter and forest fires in Bambi, or the debauchery of Pinocchio and friends going to Pleasure Island to be gradually transformed into donkeys due to their own self-indulgence. It’s more like forcibly causing Peter Pan to grow up by meeting with a pedophile pirate, instead of Captain Hook, or finding himself transported to Brave New World rather than heading to Never Never Land where his arch-nemesis gets swallowed by a cartoon crocodile.

At times the perversity and the innocent images are juxtaposed without let-up, with sly consumer branding, material and spiritual poverty, surreal alienation, fragmentation and wounding such as landscapes and buildings being composed of meat, institutional/industrialized squalor described and mechanization and objectification, such that reading on becomes difficult. There are however moments of light and levity in this dark vision, as for example here:

cats like to land in the boats and configure plans for a nightly adventure there. on the lego toy boats, they land down on the horizon where the silly putty meets the coral reef. the plan is to purchase a boat and sail it to bermuda. snoop, the burmese talks the rex kitten into maneuvering the boat, and everybody piles in.
sail!
the deep silly putty curls away and the lego anchor is pulled.
to bermuda! the cats meow, eight days of fine wine and doily making, silly putty pulls the ink out of newspaper. an edge of doily through sunlight.

from “m a o m a o, <25
> “
But this feels like gratuitous fantasy and wish-fulfillment—a fairytale bone tossed to the reader, which rather than relief almost makes it worse. The reader senses a moral conscience who is composing deftly in what isn’t so much satire seeking to effect a correction as a knowing, sardonic despair which not only doesn’t offer solutions but more than likely doesn’t truly believe in one. One which can’t help seeing and mourning nostalgically but is frustrated, despairing of any outside (metaphysical/philosophical/ideological?) help or mercy.

He does do satire here as he pokes at McDonald’s’ in a universe of parallel universes with numbered versions as if they were software (written without a programmer one would presume, and this is a poem about meat after all):

boat drives//car strapped boat universe 5.23 zooms bye. it’s the mcdonald universe 7.21 and it zooms and blurs and captain takes a picture of the ultimate mcdonald with his point and shoot camera he purchased (used at the shop in thought squat town.)
universe 5.71 goes by in a flash, parking garage.
he rows swiftly, chasing his hands with his second hands until (intake/ outtake) until blur of fifteen arms row fast boat zooms, rough the meat city. universe meat parking garage, meat book shop are wrapped in brown paper and string. meat city workers and meat banks collide into one as he comes to a sudden stop.  from “m a o m a o, <24
> “

However I’m not sure what if anything a reader, or any of us, is in a position to do about the state of things. This is a brilliantly original, inventive vision of a poet who is in control, where his subject matter is reinforced by craft to achieve his ends, and takes us along for the ride, through the grotesquerie of a proverbial ‘Tunnel of Love,’ or given us a peep at a 19th century carnival freakshow. This is art in the best sense, however; I wished for some way out or a trapdoor if not a way forward out of the nightmarish mess (where Bermuda turns out to be a rotting carcass), but if the author doesn’t believe in one it makes it all the more powerful and courageous for his unblinking narrative eyewitness account to the insanity he perceives around him.

Not everything works perfectly or seemed necessary, and there are some missteps or detours here and there where the prose seems to devolve into word salad as here, “an aura fix, with green eyes the thought matrix helps talk ronnie to the bob, ether drunk is hungry for electric bubble gum” from <17>, or where the colloquiality of the speaker harms, I thought, the originality of the fabric of the rest especially where the speaker shifts from second to a first person narrator or where imagery takes on a gratuitously scatological ( as when monkeys are throwing shit at plexiglass windows) or pornographic interludes(“the painting will get a beating,/ and a spanking, and a proper fucking./ he assures the map, taking one dip of vagina, and then licking his glove.”). But these are relatively minor and brief interruptions on the whole and obviously it could be argued that as primal, id-like interludes of a dream vision text they are justified and justifiable and come down to issues of subjective taste and audience consideration. To me they seemed small interruptions or missteps in a largely successful longer work which I personally would be tempted to edit down a bit but this is an opinion with which other readers looking for different things might disagree. On the whole this chapbook furthers the prose poem genre in some really exciting, innovative ways in the fabulist and surrealistic vein, and Hamilton manages admirably to achieve and sustain this accomplishment over thirty linked sections. At times it’s playful, irreverently perverse, iconoclastic, satirical, despairing, innocent, erotic, whimsical and nostalgic, but always wildly original throughout. I highly recommend reading this exciting new chapbook by Zachary Scott Hamilton. He is definitely a poet to watch.