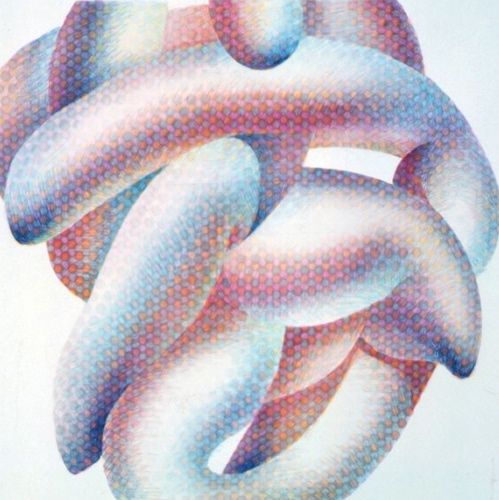 Lately, I paint my fingernails
and think of nineteen-year-old Louie,
a prodigy design engineer, whistling
at the coffee machine.
As yet, he doesn’t come looking for me,
but I’m familiar with his prick.
It comes like anxious thousands—
in showers and bed sheets, young ladies
and possibly doughnut holes.
So it goes.

He’s kind of cute in his young man way.
Maybe older than I think,
but I’d still clobber him on a date.
I know my sultry siren ways.
And this is the lightest thought
that has struck me since June.
In October, Sexton is dead—
my father’s farmer spirit

goes on dying; my friend’s cervix
corrodes with cancer; my lover lives
with his wife and kids in L.A.
Louie exists in my mind, uncomplex
and innocent, the same way a change
of fingernail paint makes life easy—
like smoking a cigarette
without the threat of cancer.
Strange, the attachments I form
out of desperation.

I woke up today, twelve hours later.
Percodan let me sleep, but with waking
it leaves a wordless, spiting headache.
I left tears with Lady Sexton;
half eulogized, worried talks with Maggie
blurred in the ink of a telephone bill—left
my lover, the same, in Phoenix,
Port Chester, New York and San Diego.

As for my strange father, I’ve had my fill
of whiskey phone calls, pleas to come
home to nurse, ingest his staggering.
Shutters clap on in suburban
Massachusetts. Wind spills the leaves.
They fall on the same side of the street
yearly. Ask anyone, “Who rakes that autumn lawn?”
My father tends his fruitless garden
like a peasant. He contemplates the town

hall like the French eyed their Bastille.
Every day I feel him skinning his own hide;
my life-time premonition of suicide.
Sometimes I wonder who’ll win out:
folly, or some foggy belief in a later redemption?
Both ride his life like the leaves.

Lately, to banish what I used to call my pain,
I’ve tried convincing myself I’m wrong
about everything. So, I caught Louie
one day—caught his light
sway as he walked, his youth as he nervously talked,
and catching his song at the coffee machine
made me happy. Louie looked untapped.
I was glad not to know him—relieved to believe
he would sniff the wine bottle cork before sipping.

I was thrilled to imagine my Louie over-cologned
for every first date. I wanted him young.
I wanted him to stay distant.
I reasoned: Louie never heard of Sexton,
cervical cancer, tragic heroes, or love affairs.
Louie’s charm kept things nice. Louie’s youth
kept bodies warm. You’ve seen where sophistication
gets us. But Louie will take his place eventually
as I have taken mine, lustily, with all the goings on.

Soon Louie won’t be sweet or my secret
anymore. Then, there’s something else, since Sexton,
coming home. No one was wasted more
than myself in her poems.