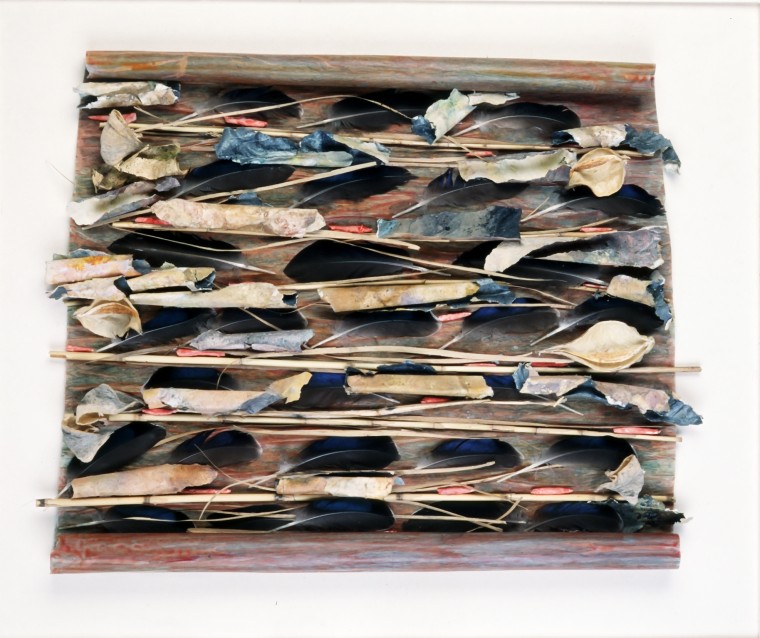 At the 5 points fountain, a common pigeon
rests on the owl on top of the Goatman’s crozier who
is seated on a pedestal and teaching, from a book, an assembly of animals all
under the aegis of water falling like rain. Five toads at the points
of a pentagram jet the water from their uplifted mouths and pause; water
that would escape something succumbs to gravity’s tether and returns,
again and again.
Always.

Life is riddled with magic, shot through with it. Spirit
impinges even into the realm of sleep, a gentle kingdom
of sense, nonsense and nightmare. A syncretistic place.
Slumber. (Once, on the Argentine grasslands, I saw
a great white heron rise on angel wings big enough to fly a man.)

John Galen Holliday MD is alone, today, really alone. No chorus. Alone.
His chorus is 6 grungy old men, 2 semi-hot women and Jeanette,
a project-dwelling cynic. They have refused to accompany our John
for a day or so. He tried to have them exorcized. Truculent Doc
and his obstreperous self.

For the bronze-green Goatman, sheened in water, auraed in sunshine… surely
he does not signify for darkness, an encroaching apocalypse, a sinister thing
requiring “rapture,” so bad no one wants to be here for it. Conspiracy.
He is only a representation of a Goatman. He is impervious to water, weather,
malice, love. Some artist forged him. Did he exist before the melting of the metal,
the pouring into the mold?

Across town, at the New Crescent Temple, food is set in front of the various statues.
Someone wakes them up each morning and bids them goodnight each evening.
“The gods and goddesses are all the same god, nameless and without form.”

At St Pachomius Catholic Church, candles burn in front of statues of Joseph and Mary.
Joseph’s staff is in bloom, indicating his fitness to be the foster father of God. Mary
wears a crown in May.

In the nearby intersection of the 5 said streets, Doc sees the Knights of Dixie Marching Band.
It is 1965 out there, just now. A phalanx of mean white guys burdened with various
musical instruments seethes under the traffic lights, trying to form
in a past day’s traffic.

(I am a gaucho. I ride the pampas and throw a weird lariat.)

Time shifts. Time’s sleight of hand, a magician’s pass. Doc finds himself
meeting Wanda Kowalski for the first time. That time expands all around him.
It is for Doc. They are hugging. Soul stuff. Doc has never been so sure of anything
down to his marrow and the busy depths of his subconscious. Something about life
begins, again. At the fountain.
Now.

The parade was the next Saturday. The center is not here. The center cannot form, here.
This is the past. Exactly 22 years from this particular past day, around the corner,
at the New Women’s Clinic, someone will leave the dumpster door open.
A crow will peck at a blue baby eye.

Doc’s chorus is of the classical-Greek-play extraction.
They once did an amazingly thorough job of ruining his present moment.
Catastrophic. Stuff.

Sheriff Buford Ramspiddler, the real life hero of the Talking Tall movies,
told the Knights of Dixie to march, today, in 1965. He is lately doing senescence
in a vegetative coma on the edge of a white man’s bardo.
And so on.

Doc likes his peaceful mind. He is content with it. He is actually considering
his chorus to be a bunch of exorcized demons. His head did not spin.
He did not vomit and spew. Strange runes did not form on his stomach.
He smokes by the fountain. His weight. He feels light, airy.

Time shifts. Time’s sleight of hand, a magician’s pass. Doc finds himself
as a newly minted MD. That time expands all around him. It is for Doc.
His father is hugging him. Today, he is a grateful survivor
of a most impressive education. Healer. A new life begins, again.
At the fountain.
Now.

Our Goatman never blinks. He cannot move. He is only a sculptor’s whimsy
in a fountain in a city in the South of North America. Goofy white men
want to lead off a parade set for another day in a long-gone present moment.
They are unfortunate earthbound spirits, all the time. And time carries them.
As long as they want it to do so. Freight.

The Goatman informs various animals. What? What is he teaching?
Frogs, dogs, sheep, rabbits. Time is unstuck, here. Doc is going back and forth
through the decades. And he always does this; and he is always doing it;
and he will always be doing it.

Doc is unmoored in time. Doc is alone. His mother died
in childbirth when he was 7. It was the day, 9/14/1963. Four girls
would die in a Sunday School class the next morning.

The Goatman does what bishops do.

(I am become the Lord of Time. I expand. I am boundless.
I am the sum of a lot of peoples’ prayers.)

Time shifts. Time’s sleight of hand, a magician’s pass.
Doc finds himself joining the Catholic Church on the Easter Vigil, 2007.
That time expands all around him. It is for Doc.
“The body of Christ. ‘Amen.’ The blood of Christ. ‘Amen.’”
Father Kevin hugs him. Heaven begins, again.
At the fountain.
Now.

In his bones, Doc knows he exists in this lively benediction
suffused with love, sense, Spirit. This stuff is easy for him because
these predominate. Yes. Really. God pours himself into time
in a myriad uncountable ways and floods Doc’s heart
which is shaped, always shaped, for that.