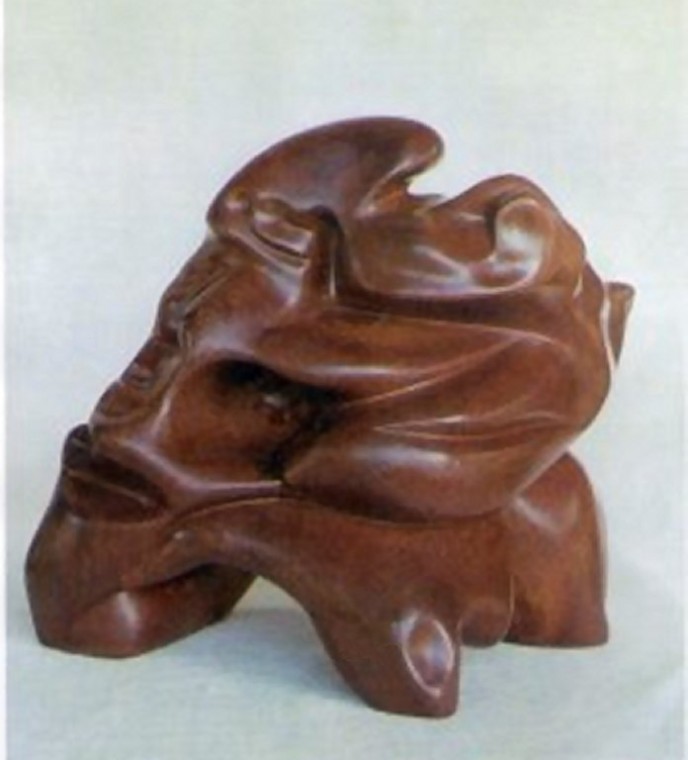 The DNA test results were conclusive: only 2.6 percent
Neanderthal. Roberta patted my head and said, “There, there,” but I
was inconsolable. “Many people have as little as
1 percent,” she reminded me. “And Africans have none at all.”
“Yes,” I said. “Then there are the lucky ones
with up to 4 percent.” “Who wants to be a caveman anyway?”
she said, sitting down with her arm around my shoulder.
“We’re all cavemen, just not from the same cave,” I whispered
into her ear. She began to breathe faster, and whispered back,
“We’re better. We’re smarter. We survived.” I was
kissing her savagely now, tugging a little
at her hair. “Their brains were actually
bigger,” I said. “They buried their dead with wildflowers.
They made cave paintings of indescribable beauty. They must’ve
been more peaceful than us or they’d still be here.”
Her eyes were nearly closed as she undid my top button.
“The original flower children,” she said. “Personally I think
you’re more than 2.6 percent.” “Maybe the Neanderthals are
still here,” I said. “They walk among us,” she murmured,
removing her blouse. “And they vote.” She pulled me on top
of her. “I doubt that very much,” I sighed as I nibbled
at her breasts. “The only thing they’d do in that booth
is paint a lovely childlike picture of a woolly mammoth with
the juice from some crushed berries.” She gasped,
“The people have spoken.”

Science has become such a preoccupation with a lot of us that it is hard not to sink into a kind of materialistic despair. For sure the advances in medicine have been astonishing, but for every cancer cure there seems to be another new catastrophe – just last week I read how the oceans are being taken over by jellyfish. No joking matter to be sure, but what can I do? Eat more jellyfish, said the article and I said to myself yuck.

Poets, of course, have weighed in. Entire 20th century careers have been built on “celebrating” nature (Mary Oliver, among others) while the 21st century may see careers built on bewailing nature’s fate. Nature’s biggest problem, as everybody will tell you, is people. Along the same lines, the biggest problem with nature poems is the poets who write them. The “celebrations” become rote, using the same tired language again and again. Or else the lamentations and protests become predictable, angry editorials chopped into lines of verse. Self-satisfaction (and self-pity) is evident. You know how everybody voted by the second line. Poems, as Robert Frost said somewhere, are about griefs, not grievances.

Which brings me, finally, to Kurt Luchs’ poem “Wrong Cave,” an instance of a poet tackling nature with good humor, aplomb, and without an evident political platform (though there is the little dig about cavemen voting – which was genuinely funny). Some would suggest this is an irresponsible approach – it seems the Neanderthals were exterminated by modern humans, therefore protests must be lodged. But extermination isn’t the whole story – it also appears that there were sexual shenanigans as well – recent DNA studies have shown that many people carry Neanderthal DNA.

Neanderthal DNA is an interesting thing, certainly an “occasion for poetry,” but what do you do with it? Luchs’ approach is to make it largely about sex. That is, after all, what DNA is, basically (and I mean basically). The sexuality in Luchs’ poem is self-evident and, well, fun. I like too the overt but ironic sentimentalization of the Neanderthals, those “flower children” aspect we like to conjure up for them – Luchs brings it up in the dialog, but I suspect that he doesn’t completely buy into it. In any case the principals of this poem are far too busy gettin’ busy for a debate or an editorial.

I felt that “Wrong Cave,” for all its merits, could’ve benefited from tightening up the line breaks, which struck me as a tad arbitrary. A minor complaint. I don’t usually care for a single stanza approach, if only because it makes poems harder to read, but by running things together this way, Luchs provides the poem a kind of urgency that, given all the sex, is quite effective; it made sense to do it this way.

Kurt Luchs offers an author note on his poem:

This is one of what I call “The Roberta Poems.” Several of these poems draw inspiration from current ideas in various sciences, as science is mostly what I read these days. “Wrong Cave” refers to paleontology, archeology and genetics.

I am well aware that the unreliable narrator espouses some erroneous and fanciful misconceptions about the Neanderthals, as many tend to do when romanticizing about obscure or more primitive peoples. We know that our immediate ancestors the Cro Magnons buried their dead with wildflowers and other objects and meant something symbolic by these actions. We also know that they were magnificent artists and must have had a correspondingly rich interior life, with both a verbal and visual language to communicate it. We do not know these things about the Neanderthals.

Some Neanderthal remains have been found in graves with flowers, but it is not clear whether this was intentional or accidental. There is not a single confirmed example of a Neanderthal cave painting, as contrasted with the many known Cro Magnon paintings. The few possible examples of Neanderthal art, which amount to little more than decorative scratches on stone tools, may be simply an attempt to imitate more elaborate Cro Magnon adornments. The two groups did co-exist for many millennia, and no doubt eyed one another closely. Neanderthal brains were indeed bigger, though lacking any preserved samples we can’t gauge their overall complexity. Based on what we know, it is reasonable to assume that they lacked a fully developed speech or the inner life and “theory of mind” that would make such language essential.

In the end “Wrong Cave” is mainly an attempt to write a funny, sexy love poem for my girlfriend, and in a small way to make a kind of generic political comment, something I am not otherwise prone to do. No wonder I projected these thoughts onto the noble, innocent Neanderthals, only some of whom were cannibals. The original inspiration was the fad for personal DNA tests — for instance, from Ancestry.com. They often do specify how much Neanderthal DNA an individual carries.