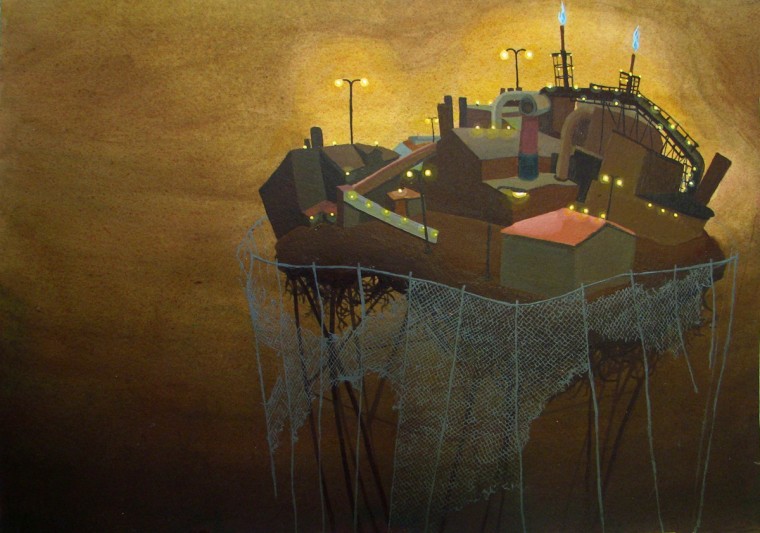 We roll off the assembly line licensed
inspected, and quality-tested
buffed up and sold to the highest bidder
the latest model engineered to stay within
the speed limit, taught to settle
for the hum of steady progress
spared the trauma of sudden death.

By way of mature choices we forego by pledge
the danger of ecstatic loops and black-out
tailspins, look for just enough horsepower
to climb a couple of small mountains on the premise
that once over the top we can coast down in neutral
balanced on the precipice, in deliberate descent
without brakes, burning the back side all the way
to easy street.

The world would be a better place
if we could put our vehicles in neutral
take our foot off the gas
coast for a while, our debt
reduced by a measure.

Another erection waiting in the lobby with duty well done
does not honor any belief that open minds
must be kept open. Some renegade not afraid
of cracking a book before getting nailed to the cross
opens an alternate route before he’s
struck down in prayer
burned at the stake
tossed into prison.

We’re reminded constantly
how a rebel tongue starves to death.
So much has been invested in us—
by bankers, teachers, parents, priests—to hold our place
in line zombied by muzak
passively pummeled into heart failure
by the frequency and duration
of half-truths.

I was feeling the assembly line and marveled at the metaphor
Of the manufactured life coasting its way to easy street.
That’s my life, I thought.

Then suddenly “Fast and Furious” is expanded to include rebels, prophets, and messiahs of every sort. And while being actively pummeled by this new analogy I can’t seem to find my way back to the original car.

And that made the last couple of stanzas feel disconnected from the rest. A road that led, a bit uncomfortably, to melodrama.

This poem touches on the (particularly American) culture’s commodification of the individual using an automobile assembly line factory and manufacturing metaphor for what the ancient Greeks termed paideia. Paideia is the enculturation and teaching of the community’s ideals to the next generation, regarding historical, cultural and moral values for the purpose of inculcating wisdom and virtue. The goal was to furnish and equip the mind of the child to become an educated, valuable and productive citizen. Whether it was the intellectual values of free inquiry and Socratic dialog of Athens, or the war-like values of strict discipline, sacrifice and the potential glory and immortality to be gained through death in battle of Sparta, the ideals and norms of a culture were taught not so much on the basis of naturally inherited rights for the benefit of the individual as they were for instilling responsibility and contribution to the community, for the community. Virtue is something we rarely hear about unless we take a philosophy survey course, and wisdom, also rare, translates to the mastery of a skill or trade whose highest level is tested and proven by one’s ability to teach it. Wisdom can also mean one who moves beyond mere factual knowledge (but also includes it) to be able to reason logically and clearly, with discernment, good judgment and highly developed taste. The Greeks valued virtue and wisdom, and paideia was the road to get there.

Because it’s impossible to not pass on your values and ideals to your kids, I think Memmott’s complaint isn’t with paideia or the lack of it, per se. I believe his concern is with the quality of what it’s become in our contemporary setting: a commodification and elevation of a materialistic ideal of safety and coasting on the prosperity, backbone, labor, and risks taken by those who’ve gone before. Part of the difficulty is perhaps enjoying the benefits of technology and how it has eased the burdens of striving and suffering in our lives enormously for the last hundred years, and/or it may be partly the distraction and confusion of what to believe (metaphysical truths?) and pass on, including the unearned nature of the next generation or two’s inheritance from the previous ones that suffered to get to the prosperity it arrived at and is now passing along empty consumerism, skepticism and cynicism rather than something meaningful, lasting, and substantial. And also to be fair, it should be noted that life and ‘progress’ because of technology is moving at a faster and far more complex rate than ever before in history which does not help any of these problems.

The folks responsible for this paideia specifically are outlined in these lines:

So much has been invested in us—
by bankers, teachers, parents, priests—to hold our place
in line

I find it telling that he places bankers first in the list, which is not where I would have started, but I’m paying attention. What they seem to be passing along is the emptiness of status quo and coasting. In other words, just keep on taking without giving, and don’t put any hard thought in about it. The issue foundationally appears to be the frequency and duration of half-truths. So, the enculturators want it this way, or through lack of action, allow such things? Those responsible for paideia (we/us) have abdicated our job for whatever reasons, which means by implication the generation to come will be ill-equipped to navigate the storms and conflict that will inevitably come.

I think of this true account of an amazing, unnamed woman from Aleksandr Solzhenitsyn’s Gulag Archipelago, who was able to stand up against Soviet interrogators in this description:

“N. Stolyarova recalls an old woman who was her neighbor on the Butyrki [prison] bunks in 1937. They kept on interrogating her every night. Two years earlier, a former Metropolitan of the Orthodox Church, who had escaped from exile, had spent a night at her home on his way through Moscow. ‘But he wasn’t the former Metropolitan, he was the Metropolitan! Truly, I was worthy of receiving him.’ ‘All right then. To whom did he go when he left Moscow?’ ‘I know, but I won’t tell you!’ (The Metropolitan had escaped to Finland via an underground railroad of believers.) At first the interrogators took turns, and then they went after her in groups. They shook their fists in the little old woman’s face and she replied: ‘There is nothing you can do with me even if you cut me into pieces. After all, you are afraid of your bosses, and you are afraid of each other, and you are even afraid of killing me.’ (They would lose contact with the underground railroad.) ‘But I am not afraid of anything. I would be glad to be judged by God right this minute.’

There were such people in 1937 too, people who did not return to their cell for their bundles of belongings, who chose death, who signed nothing denouncing anyone.”

Similarly, there is the historical figure of Franz Jägerstätter, brought to light very recently by Terrance Malick in his new film, A Hidden Life, who refused to swear allegiance to Hitler and therefore paid the ultimate price.

The big question is, if in her (or their) shoes, how would I respond?

The next question might be, if ordinary Germans went along initially with the Third Reich because it was expedient (coasting) rather than resisting Nazism when they might have had a chance, or the Russians who crumbled under the Russian Revolution to eventually be arrested, imprisoned or shot or die by famine under Soviet communism, could we be in the preparation stages for some such similarly destructive ideological turning point here in the West, now?  Will my kids have the principles (wisdom, virtue, backbone) to resist when the time comes?  These are painfully difficult questions for me.

The poem is subject to a valid critical read and accusation of being polemical, or as Alan Gold above suggests, melodramatic. However, I have seen and noted similar poems, which succeed by using such devices in their own ways and for their own purposes, from such notable poets as Jim Harrison (Hospital, Easter Again, Vows), Jack Gilbert (The Abnormal Is Not Courage, Susanna and the Elders, Pewter), and George Bilgere (Snow). I find Paths of Least Resistance a provocative, timely and complex piece.

In preparation for inclusion in his next book, David has shared a revision with me, made since the time of submission and acceptance of the piece in our journal—apparently he is always revising.  One thing that jumps out immediately is replacing ‘renegade’ with ‘insurgent.’  I will post it below:

We roll off the assembly line licensed
inspected, and quality-tested
buffed up and sold to the highest bidder
the latest model engineered to stay within
the speed limit, taught to settle
for the hum of steady progress
spared of trauma by sudden death.

We pledge to forego the danger
of ecstatic loops and black-out tailspins
for enough horsepower to climb
small mountains on the premise
that once over the top, balanced on the precipice
we can coast in neutral and deliberate descent
without brakes, down the back side
all the way to easy street.
The world would be a better place
if we could leave our vehicles in neutral
take our foot off the gas
coast for a while, our debt
reduced by a measure.

We’re reminded constantly
how a straight tongue starves to death.
So much has been invested in us—
by bankers, teachers, parents, priests—to hold back
secure our place in line
zombied by muzak
passively pummeled into heart failure
by the frequency and duration
of half-truths.

Another erection waiting in the lobby for duty well done
does not honor any belief that open minds
must be kept open. Some insurgent not afraid
of cracking a book throws wide open the door
before he’s struck down in prayer
nailed to a cross
burned at the stake
tossed into prison.