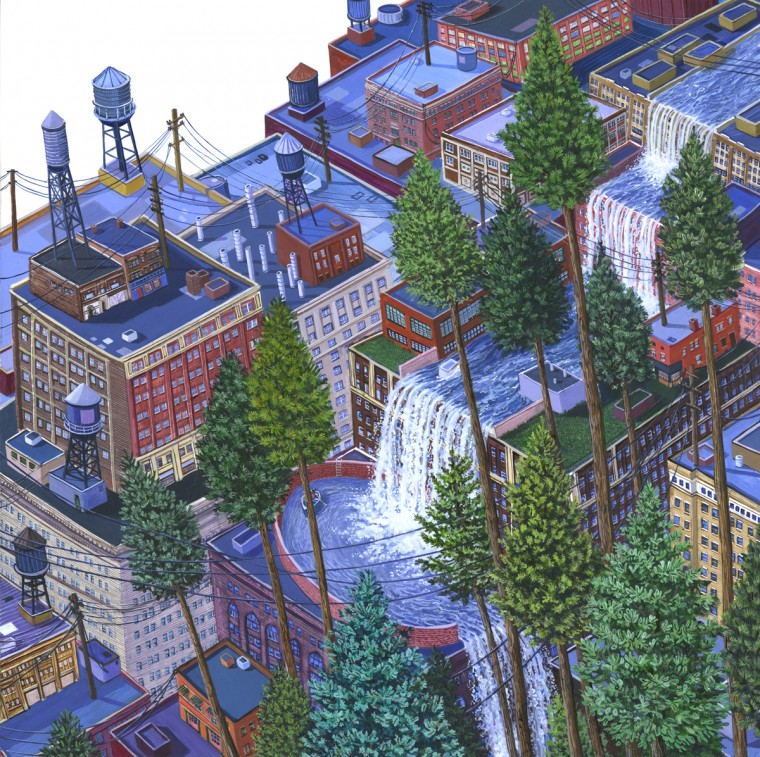 Hours after holding my new grandsons
for the first time, I dreamt this:
Out of a chaos of missing persons,
missing papers, I climbed to the top
of Sawtooth Ridge in Yosemite
from Slide Canyon on the south.
Others were with me, ahead and behind,
guides I had worked with in the Sierra.
On the crest of the ridge we one by one
turned toward the westering sun,
not scrambling over blocks and towers
but strolling along a perfect pitch
of polished granite. The going was easy,
the air around us rich and bright and pure and full.
By then we were strung far apart,
and for a moment I had the ridgetop
almost entirely to myself. The friend
I could see in front of me was just starting
to drop down a hidden ramp into deep
shadow, where I would follow,
down where the remnant glaciers rested
on the north. I was wearing a full pack—
we all were—but it had no weight,
my shoulders were steady, I was walking,
walking in the light, the world falling away
before me, just where I wanted to be.

What I like here is how the dream-narrative seems to meld right into memory: that the hiking could have been real. Of course, for the poem, it matters very little if the dream is a dream or if it’s a memory because both dream and memory end in the same place: a sublimity bending to wisdom, that we all move into that darkness, our packs lightened, finally wanting to go where we’ve been headed all this time.

Reacting a bit to Jared’s review above, and riffing off it with my own thoughts, I think rather than memory directly (though memory plays a role indirectly through associations with past friendships and the place of Yosemite’s Sawtooth Ridge), this is a dream, rather, which points to a future state and acts symbolically as a prophetic vision of paradise.  The poet has just held new grandsons, which comes loaded like a rite of passage in most father’s lives in late middle age, with its awareness of aging and impending death but also joy of passing the baton along to future generations.  Willis’s speaker then proceeds to dream within hours this dream.  “Out of the chaos of missing persons and missing papers” he ascends a mountain—in which friends and past guides are hiking with him and have reached and are passing along the crest—and one gets the sense both of a busy scholar’s life interrupted and one who lost friends in death along the way but in the dream all is well and ordered and some have returned along the trail. They no longer scramble “over blocks and towers,” but now are “strolling along a perfect pitch/ of polished granite. The going was easy …”  There are two tracks in the poem by which one can symbolically read this, and for the speaker those two tracks do end up in the same place: one is to read it as a foreshadowing of the speaker’s mortality, with the sun westering, and the path of the person ahead of the speaker dipping “down into a hidden ramp into deep/ shadow” (very like a shadow of the valley of death?).  Another is to think in terms of a future glorified state (whether after the resurrection or during an intermediate pre-resurrection heaven) what we are told is the miraculous fact that “the air around us [was] rich and bright and pure and full.”  And later, the poem ends with these lines:

I was wearing a full pack—
we all were—but it had no weight,
my shoulders were steady, I was walking,
walking in the light, the world falling away
before me, just where I wanted to be.

The non-metaphysical read on this piece is to see the two threads as dream and memory interacting.  The visionary read is to see the interaction of intimations of mortality, Heaven, and/or resurrection being hinted at.  The beauty and success of this piece for me is that Willis can pack all of this quite successfully into a poem by folding it into the context of a dream and still retain complete verisimilitude for skeptic and believer alike with no desire to grimace, smirk, or cringe.  The naturalness of the experience comes through without a hint of sentimentality.  I believe we all experience dreams like this—I know I have.

I felt something similar when my first son was born.
For me, it was curiously deflating.

My genetic duty accomplished, my DNA whispering that it no longer mattered if or when I died.

Biologically speaking, I was more than almost there. I was done.

That depressive sentiment proved to be premature by decades.
In fact, life as residue is strangely satisfying.

On a different path, Paul Willis elevates this experience.
His faith-inflected journey into the valley of the shadow
Is filled with light.