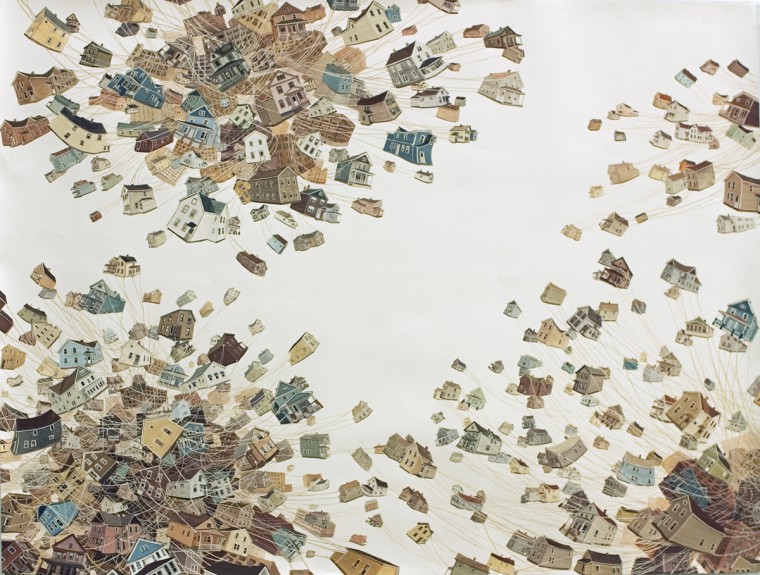 All the other attributes poetry is said to possess–rhapsodic language, say, or fierce compression, fragmentariness, juxtaposition, everything else–are bullshit.  The only tool the poet possesses that is not also possessed by the writer of prose is the line.  Give away the right margin and you give away the farm.  You might be writing what you’d like to call a prose poem, but that moniker’s all about the adjective, not the noun.  I love prose (and even prose poems) because the same absolute attentiveness to syntax and rhythm and sound is required if one aims to approach the condition of literary art.  But if you’re not writing lines, you’re not writing poetry.

—Robert Wrigley, from “The Only Tool”

Where the current is slow, behind a fallen tree, a green and amber pike is lurking.  His mottled skin seems to ripple with the striped yellow sunlight of the water.  Above him, near the surface, bleak scurry and flash like submerged silver swallows. The beaked pike is a Silurian god, down there in the lowest stratum of the river.  When he rises to attack, he dredges darkness up into the light. Within a daggered black sun of pain a bleak is seized.  Fish scatter outwards like a corona of bright rays.

I always tell my students not to worry about originality; just try to copy the manners and musics of the various, the more various the better, poetries you love:  your originality will come from your inability to copy well:  YOUR GENIUS IS YOUR ERROR.

—Dean Young, from The Art of Recklessness, pg 48

…. I heard Mozart’s last trio late last night, a spine tickler, like the night I heard Thelonious Monk in Grand Central. There are so many emotions on earth, especially trapped here where moment by moment I surge with emotions.  I’m told this place is admired throughout the world, though my brain waves tell me different. The nurses are kind and friendly while the doctors tend toward smug and arrogant. Hundreds of doctors looking for something wrong are suspicious.

The old bugaboo of depression slid in. I wanted to sleep on the floor but was frozen in an electric bed. I began to have delusions and at one point I was in Paris at my favorite food store buying cheeses with my grandson. Another night I was wailing and the attendant shook me awake. “I’m dying,” I said. “No you’re not, you’re just wailing.” I ate an apple and went back to staring at St. Francis and his birds. Without birds I’m dead.  They are my drug that lifts me up to flight.  Thousands of kinds of birds I’ve studied, even in the rain when they seem more blessed on the branches.

What is wailing? A death-drawn crooning. It hurts to hear noises from the pediatric ward — the innocent crying out.  I am thoroughly guilty in a long life.

I wanted to be a cello. I hear cellos when I’m trout fishing. The green banks with wild roses capture the cellos and thousands of birds, many sweet-sounding warblers and colorful western tanagers. Will I fish again with this badly ruptured spine? The scar looks like the bite of an ancient creature.

There is a place in us to weep for others. I found it at night with day-time eyes, whirling the memories so fresh you could smell the pain within is dark and raw. This great sprawl of sick people craving the outside, to walk in a forest beside a lake, the air full of birds in the greenery. Saint Francis dozing against a tree, a yellow warbler perched on his shoulder. There is no way out of this prison we have built so clumsily, hellish in its ugliness. Most of us want to stay. I can’t die when I want to go back to Narbonne and my secret room where I write so much. They cut me open in a long strip and luckily sewed me back up. In hospitals we are mostly artful sewage systems ….

A man saw a bird and wanted to paint it. The prob-
lem, if there was one, was simply a problem with the
question.  Why paint a bird? Why do anything at all?
Not how, because hows are easy—series or sequence,
one foot after the other—but existentially why bother,
what does it solve?

—Richard Siken, excerpt from “The Language of Birds,” from the collection War of the Foxes

The sky gleamed down through holes that were like empty eye-sockets. A wren walked over the wooden surface, its song echoing frivolously in the cloistral gloom of the friar-waisted tree.  The oak was dying into a different life. Embossed with a gloat of goblin faces, it seemed to have assumed an animal existence, as though it might go crashing through the wood in search of prey.

—J. A. Baker, from June: Beech Wood, The Hill of Summer

The sun was pencilled with clouds. It sank beneath them, red and gold, and rested on the skyline. The oaks and larches of the wood were crossed with a last touch of fire. Fox-flames burnt briefly upon bark, a splash of liquid colour. Hot golden light burnt deep, branding the trees with a ring of fire. Then suddenly it withdrew, retracted in long flashes across fields, and whipped downward with the sinking sun. What a god-denying betrayal it must have seemed to the first men, to find that the sun would not float upon cloud or water, but would always sink, would always plunge into the skyline, never to be dug up again, burrowing like a golden mole to burst at morning into eastern air … Everything was very still, quieter since the setting of the sun. The sun is silent, yet unconsciously we may be aware of its endlessly roaring flames, like the far whisper of an unseen waterfall.

—J. A. Baker, from June: Midsummer, The Hill of Summer

The smell of the hay was stronger, sweeter now; the whole field was adrift with it. It was the smell of raw green death, exuberant, nostalgic, piercing; the sour sweetness of decay, the earth itself in flower. Breathing it, I seemed to become lighter, aerial. I ran through the dark field, ran between the tall trilithons of the hay bales that leant against the sky like the tilted circle of Stonehenge. It seemed that deep in the ground, far below in the past, men were lifting the hay towards me. And I could bend to meet them, passing my arms down through the stiffness of the earth to receive the death of grass, the midsummer changing of the grass into the dry papyrus of the living hay.

The moon rose from the dark rim of the wood, a red arc flaming upward like a fire rising, turning from red to orange, from orange to a circle of deep yellow. The hay bales flung their long shadows from them, like a silent flinging out of wings. The hay was white as frost.  The trees were darker now the moon had risen.

—J. A. Baker, from June: Midsummer, The Hill of Summer

For the first twenty feet from the ground, the bole of each tree was scaly and brown; but above—up to the highest branches—it was a smooth and glowing golden-red, both gold and red, so that one could not tell which was the dominant color. The trees did not reflect the sun so much as glow from within, as though their bark was of parchment, a membrane through which a steady flame was shining. The seemed to have their own light, absorbed from the sun, and retained. when I went past at dusk they were still shining with a strange, almost gaseous, incandescence, a reddening luminosity that only faded, and then quite suddenly, when night came, as though the colder air had frozen it away.

The tall pines rose from the heath in complete stillness, unmoved by the wind. The bark of one tree was peeling, and the eye winced from the flayed look it had. Slowly I saw, really saw and did not simply know, that these pines were living things, standing like emaciated horned animals, maned with their dark green or dull blue clusters of narrow leaves. Their deep piny smell was the smell of living beings, anchored by their roots, able to move only upward or outward as the sun ordained. They were not dead, but merely prisoners, land-captives, with the sound of the sea in their leaves …. Nothing disturbed my vision of these ancient Nordic pines, herded together here like the last buffalo, living their own intense life, the slow fire that can never be seen. Cut where you will, you cannot find that flame.

—J. A. Baker, from July: The Heath, The Hill of Summer

There is a yellow harvest light above the fields, a tawny glow that is neither summer haze nor autumn mist. The red combines roar, and the corn is flung high through the smoke and the yeasty clouds of seed. Shining flakes of cirrus float in the pale violet sky. Sparrows gather at the farm. Swallows fly through the tattered shade of the trees, over the falling ponds, into the twittering barns that smell of mist and bread. There is an oppressive silence in the cobwebby dusk of the copses …

I stand at the top of the hill. The long estuary rises before me. It shivers out to east and west, like a great spear of light flung between earth and sky.

The water shines. It has no dimension. I cannot tell whether it is higher or lower than the hill where I am standing. Water, air, and light, float upward together. This is the world of sky, of the east wind, of the ancestral sea. There is a strange breathlessness in the air. The body is lifted up by the joy of arrival, by the voice of the curlew, by the soaring cries of the gulls. The sky has descended. All things are set apart, made distant. they have a different life, a remoteness they do not possess inland. The sea has risen. Its charismatic glitter towers above.

—J. A. Baker, from August: Estuary, The Hill of Summer

“And what is written well and what is written badly—need we ask Lysias or any other poet or orator who ever wrote or will write either a political or other work, in meter or out of meter, poet or prose writer, to teach us this?”