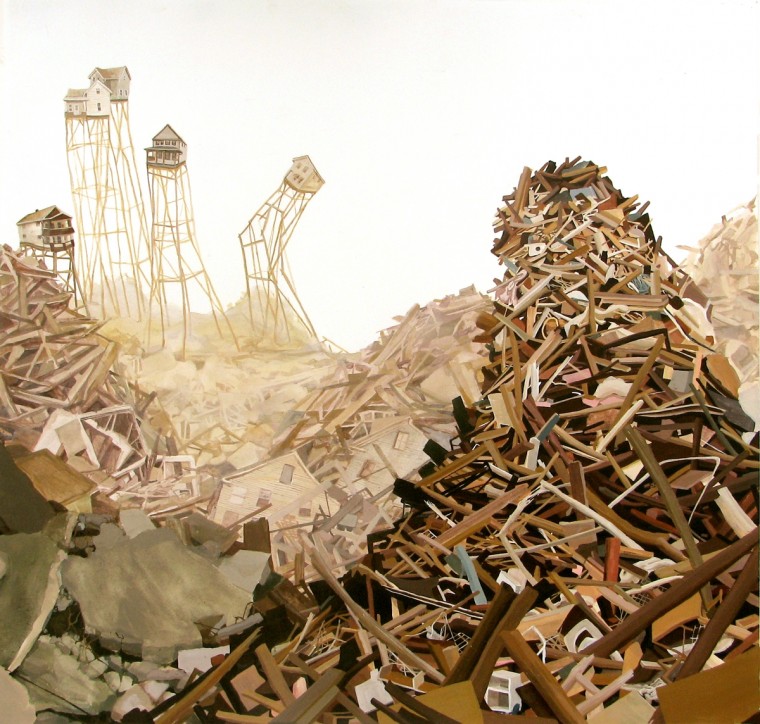 First off, I want to say how particularly grateful I am to Amy Casey for allowing us to feature her art work in this issue. I started following her work about 10 years ago after another featured artist for Triggerfish, David Carmack Lewis (Issue #8), alerted me to her through his blog, ArtOutThere.

I may be in a unique position to ‘get’ her work, or at least I relate to it since I have worked for the last eleven years at a landfill which specializes in demolition and construction debris and other commercial, industrial waste. It seems as if she predicted the economic crash of 2008 at least two years before, to judge by her early work. I’m hoping eventually we can work out the details necessary for permission to use her painting above, Stragglers, for cover art upon publication of a collection of prose poems I’ve written about landfill life and work. 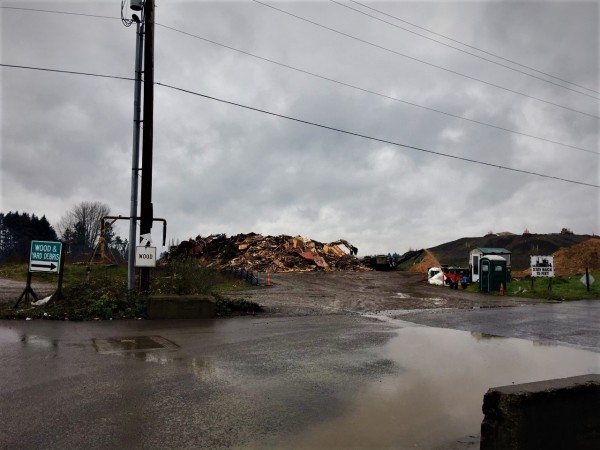 Her latest work are acrylic productions on paper or panels filled with houses perched on forests of enormous truncated stumps, some of which look like a cross between a rainforest clearcuts and bizarre marine coral reefs. Another prevalent theme lately is greenish, chaotic oceans with floating commercial buildings like half-swamped boats, adrift. She never seems to stop pushing or challenging herself forward into new ways of seeing and imagining which become oneiric, surreal commentaries on culture and the environment. These have a way of exposing the anxiety and instability under the surface of her and our consciousness. While Cleveland plays an important role in the building blocks of her subject matter and themes, landscapes and architecture from her visits to Alaska, Vermont and Finland also make appearances, or wherever artistic residencies and fellowships take her.

I’m also truly grateful to this issue’s group of poets for offering up their work and then engaging to such a high and rich degree in the commentary on the works of fellow contributors. The range of styles and themes in this issue’s poetry is broad. I’m proud of the issue, and I hope you’ll enjoy it as much as I have putting it all together.

I also wanted to bring to your attention that one of our contributors, Simon Perchik, with three new poems in this issue, will be coming out with a print edition of a his book, D Poems, which we published as an electronic download. Penny University Press collaborated with Cholla Needles Arts and Literary Library by offering permission to do a print version of D Poems and also include Steve Parker’s Interview (from Issue #17). We will still be offering D Poems as an electronic download as before, but if you prefer a print copy I would encourage you to get one at minimal cost here

This is good news for Si and his fans—he turned 96 this year.

Also, let me offer a further note (call this a mini book review/recommendation?) regarding the Collage page in Issue #23:  Some of you will no doubt notice and perhaps wonder at the ridiculous preponderance of J.A. Baker excerpts from his amazing book, The Hill of Summer. All I can say in excuse is that after reading The Peregrine, and The Hill of Summer, Baker easily makes it onto my list of the ultimate dinner party guest list (if you could invite anyone from history …). Do you keep a mental note of those? Stanley Plumly wrote a biography of a real life literal version of one of those called The Immortal Evening, in which the painter, Benjamin Robert Hayden hosted a dinner party in which Keats, Wordsworth and Charles Lamb were present with predictably interesting results … he also did an amazing and moving separate biography on Keats’s last days. You hardly have to be familiar with Keats’s work to find these fascinating. 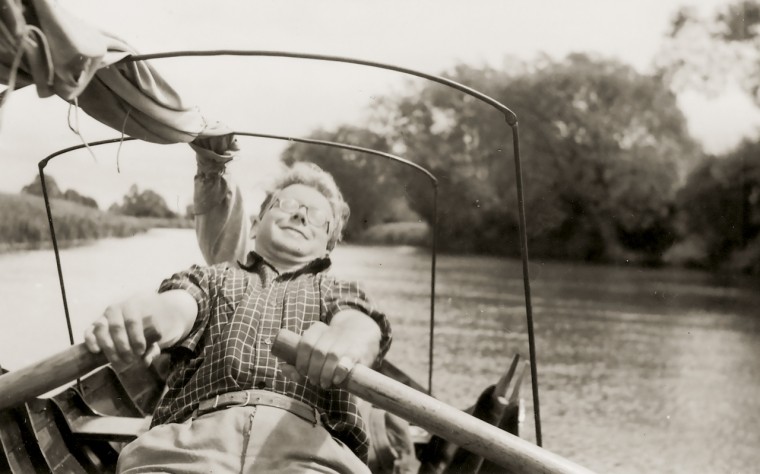 Baker (1926-1987) is one of those unknown, unremarkable figures from Chelmsford, Essex. He dedicated the last years of his life bicycling and walking a ten square mile area around his house and keeping a journal, which would form through condensation the raw material for the two books mentioned above that caused him to “become one of the most important British writers on nature in the twentieth century,” according to Mark Cocker. He wrote The Peregrine during the early sixties when he discerned and predicted that pesticides were going to put an end to the raptor’s presence in the UK permanently. These observations and writings were to be a swan song and epitaph to the majestic bird. One of Baker’s characteristics is to write without a hint of sentimentality, rarely divulging any personal thoughts or direct emotional commentary in his books.  The writing is far from clinical but he sticks to describing observations and encounters in the natural world. One of the editions (I’ve inserted the cover shot below) has a copy of an essay he published locally about the impending construction of an international airport near an estuary on his rounds, and in which we are offered glimpses of the rage and outrage he felt toward the transformation taking and about to take place around his home and the local environment. The airport never did go in, the peregrine falcons enjoyed a comeback following the discontinued use of certain deadly toxic pesticides. I’m unsure whether he lived to see this because his life was cut short at 61. 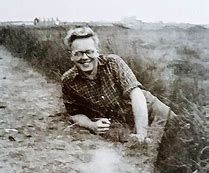 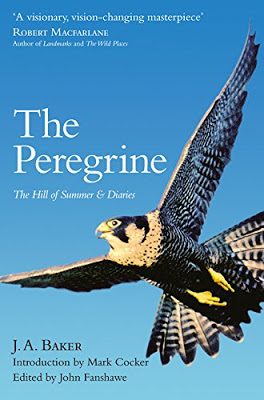 The Hill of Summer consists of a broader less specific grouping of observations not focused on peregrine falcons but conducted and condensed over the same ten year period of observations. The chapters are separated into a seasonal grouping over (a fictional) one year and covering different geographical or eco systems within the 10 square miles around his home. The thing that I hope you’ll catch from the selections I culled from the book is not only how poetic the sensibility is and the style, in which some of the prose could literally be broken into lines, but also the illuminated, transcendent nature of the vision. Trees glow—skies merge with the ocean—a sparrowhawk is described as an alien, flying, carnivorous plant. The beauty of the writing consists not only as a property of the poetic sensibility, but the spiritual scope of the vision. Baker did not see things the way others see a landscape. Cocker, in his introduction to the book, goes over some of the characteristics of the prose style and Baker’s peculiar and idiosyncratic way of seeing, which is helpful. To me it’s very hard to describe what he does and what kind of mind it would take to see the way he must have in order to write the way he did. It’s not just or simply close observation, although it is that, but a mannered and highly trained way of thinking about and expressing by calling on imaginative resources and perhaps fortified by wide reading, that I am envious of, and have been looking for without knowing it most of my reading life. Really though, the best way to relate his special qualities of writing and vision are, as with any other poetry, not to discuss it, attempt a paraphrase or description, but to simply read it for yourself, which I sincerely hope you’ll make the time to do. The book is 100 pages or so long. I found it so rich and dense that it was impossible read too much of it at a stretch—my mind would start to wander like a mouth on overload from chocolate mousse. 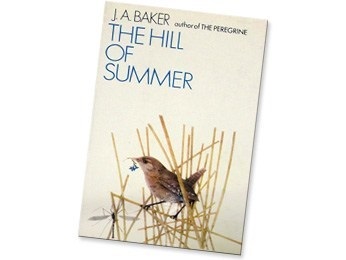 I find it amusing that some purists will insist it’s impossible for the genre of prose poetry to exist as anything other than in name only, thus I began the Collage page with Wrigley’s (a poet, by the way, whose work I also highly admire) shot over the bow. I hope Baker adequately gives him the lie?

Lately, I seem to take great pleasure in going as far afield from relevance in these letters from the editor, perhaps in an attempt to go as far out on a tangent as Larry Levis used to do in his poetry, probably just to see if I can pull it back in. Maybe also it’s the only time I get to screw around in a little note to anyone literarily?

So I’d like to mention another love of mine, this time in British Television, from, to me, the unlikely source of Mackenzie Crook. You know the pirate from the Pirates of the Caribbean movies who had the fake eye that was always coming out and rolling around? Who knew that he was not only an actor playing minor comic roles in admittedly big productions, but had also been a stand up comic, was a really poignant storyteller (something he says is key to stand up) and not just a writer for television, but could also direct? What?! The BBC show I’m talking about is the Detectorists. Two seasons are available on Amazon Prime (or you can always catch episodes on youtube). A third season is available, which you will have to buy as a DVD I’m afraid, but it is truly a must see, since it ties up everything beautifully in extremely satisfying ways. Ok, so what’s the bloody connection here? Well, the Detectorists is filmed in Framlingham, Suffolk, which is within 40 miles or so north of Baker’s Chelmsford, Essex. By watching this show I can get a glimpse, without airfare, of the basic landscape and culture of Baker. I know that some of you who have managed to read this far are still thinking the connection to poetry and this issue of TCR and the circling back from a big tangent is still too far, so I will try to cinch it by quoting an excerpt of dialog from the finale of Season Three. Lance (Toby Jones) and Andy (Mackenzie Crook) are the main characters and they are having a conversation in which Lance is attempting to justify the hobby they engage in of metal detecting, which they do a good job persuading themselves is not truly about treasure hunting, but actually mainly serving importantly in the interests of history and archaeological discovery. Outsiders always assume they are only looking for gold. Andy actually has become an archaeologist, and Lance makes a discovery of an aestel (a reading pointer artifact from the late ninth century) which goes in a museum with his name under it which seems to satisfy him immensely, so maybe they are not fooling themselves—but of course they want to find treasure (gold)! We have watched as they’ve come teasingly close to huge discoveries over three seasons only to miss by inches, repeatedly. They’ve just spent their final day looking in a farmer’s field they had permission to search, but which is to be developed and going under construction to build a solar farm the following day. Before heading off to the pub to join up with their club they have this talk:

Andy: So that’s it, then. Wasn’t meant to be.
Lance: Nope, not this time.
Andy: What do we do now?
Lance: Find a new permission, mate. Carry on. Gotta keep searching.
Andy: I don’t know why we do it.
Lance: No? I do.
Andy: I thought you probably would.
Lance: Time travel.
Andy: Go on.
Lance: Metal detecting is the closest you’ll get to time travel. See, archaeologists, they gather up the facts. Piece the jigsaw together. Work out how we lived and find the buildings we lived in. But what we do is … that’s different. We unearth the scattered memories, mine for stories, fill in the personality. [smiles, nodding]. Detectorists … we’re time travelers.
Andy: Yeah, all right. I’ll give you that one.
Lance: Pub?
Andy: Go on, then.

These two and their passion and hobby seem most like the world of poets I move amongst and know than anything else I can think of. Will that tie it all together?  If ‘The Unthanks’ clip doesn’t, then I give … (more than a music video, this is an actual clip from the show—careful though, it might hook you). 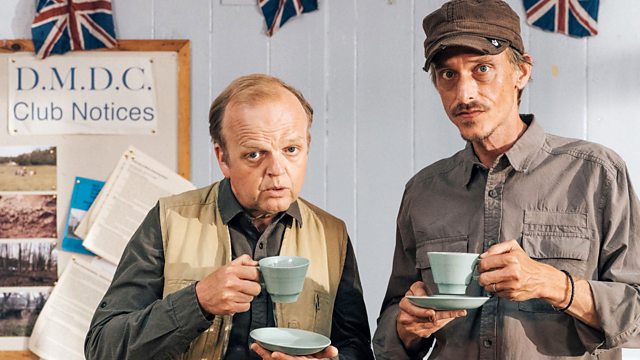