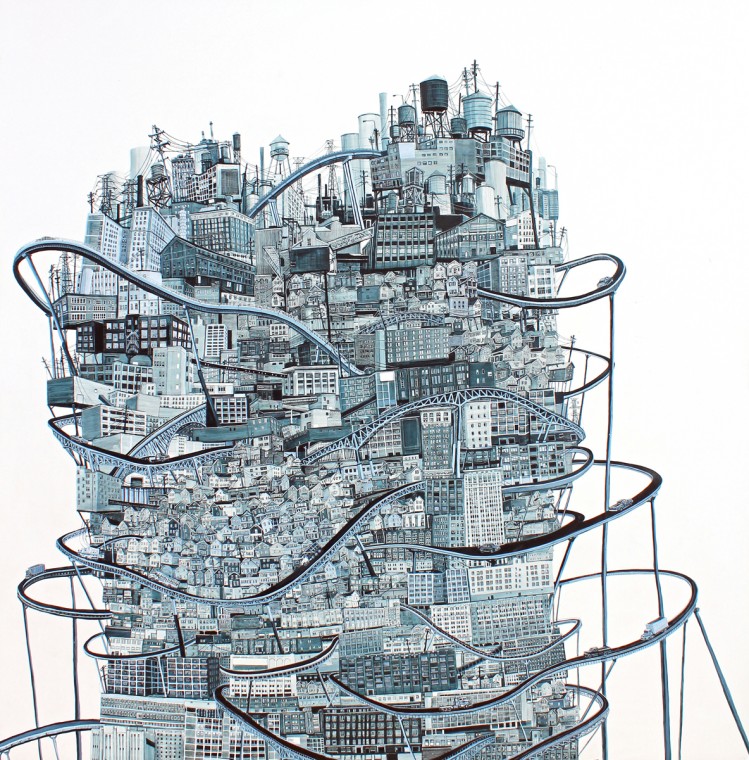 He tells me: “My mother’s name is Hend, meaning ‘pay me 12 female camels,’
you know, like what she brings will make me rich.
And my father’s name, Samir, means ‘loyal companion,’
but from books I learned to love among the flowers.”

I tell him, “My mother’s name scares me,” meaning: there it is in my mouth.
I tell him what I did to lose my father’s name
and took new languages to decorate my geneology
with stags-leaping-over- and many bulls compassed me.

and so transform ourselves into turtledoves who fly together alone
through the beautiful here comes everybody.

I admired the excellent use of parallel structures in this poem, both in line and stanza. The opposition in the first two stanzas makes for a striking contrast in the subjects’ perception of their parents. I assume the italics for Hend and Samir and the italicized phrases refer to The City? Though I’m not familiar with the reference the poet makes and some resonance is lost to me, the marriage in this poem takes flight with “We genoa the binds that secure the sky//and so transform ourselves into turtledoves who fly together alone…” and this powerful line is embedded and wraps into a new stanza. I love the sailing imagery with “genoa” as a verb as it echoes “the mast.” Sea and sky. The possibility of transformation and maturity…”flying together alone.”

This is one of those poems I like without being able to say precisely where the liking comes from, because the poem seems to slip through so many nets without being caught. The repetition in the line openings — He tells me, I tell him, And just like that — sets up a kind of order, but in each case what follows breaks it immediately, an abrupt shift in tone and context that leaves me with a sense of startled wonder. The way the italicized phrases insert themselves into the body of the poem from—according to my best guesses and inexpert googling, sources diverse as Psalms, The Odyssey, Finnegans Wake, & more.—pin it together, but also remind the reader that under the layers are just more layers — literature always composting itself and sending up new shoots.

And if the title does refer, as per my best guess (and more inexpert googling), to The City by C.P. Cavafy, this is a surprisingly buoyant response to a poem with a much bleaker take on things. From a grounded, rooted start—tradition, etymology, flowers—this poem ascends quickly to leaping stags, airplanes, and the turtledoves of the fantastic final lines, expansive, transparent with hope.

Bread crumbs in italics
Led me from Cavafy to Holderlin to HCE
From ancient roots to a painful reconstruction of personal identity
(Despite the fumes of social media propelling the polyglot onslaught of a flattened world, where every syllable assaults with equal truth and without filter.)
Yet somehow with eyes fixed on the sky we transcend those sirens.
The result is not romantic and it is not rooted but it is a kind of freedom
In a day when everyone is deconstructed
In the time of here comes everybody
In the age of the atomized heart
Flying alone together is beautiful enough.